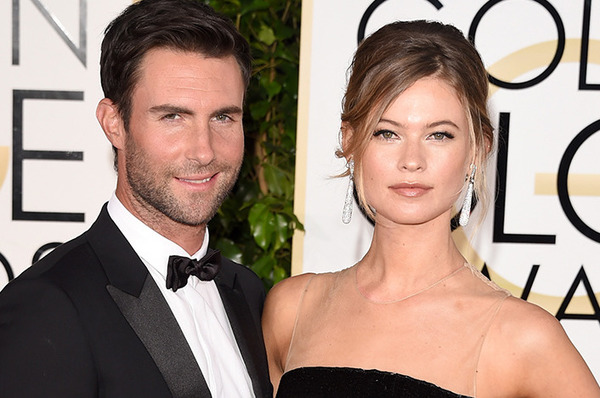 Victoria’s Secret show looks like a parade of Adam Levine ex-girlfriends. Maroon 5 lead singer has already dated the well-known beauties, such as a model Rebecca Ginos, an actress Arielle Vandenberg and a tennis-player Maria Sharapova. 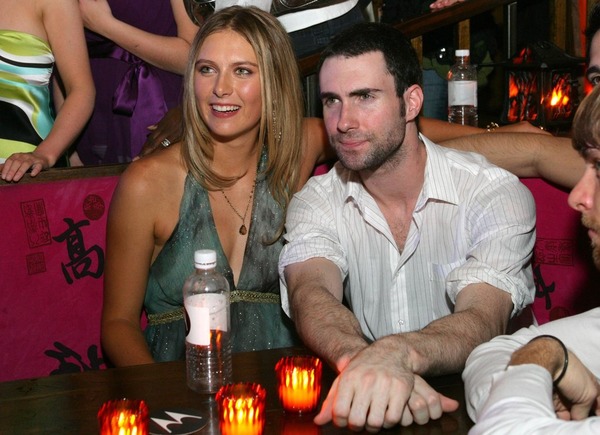 That’s why, when the famous musician finally settled down, everyone wants to know, who is that beautiful lady, who has caught his heart.

In July, 2014 Adam Levine tied a knot with a top model from Namibia Behati Prinsloo. Since that moment the couple’s fans have been bombarded with sweet pictures of them too, who were noticed at numerous public events, like concerts, fashion shows and after-parties. 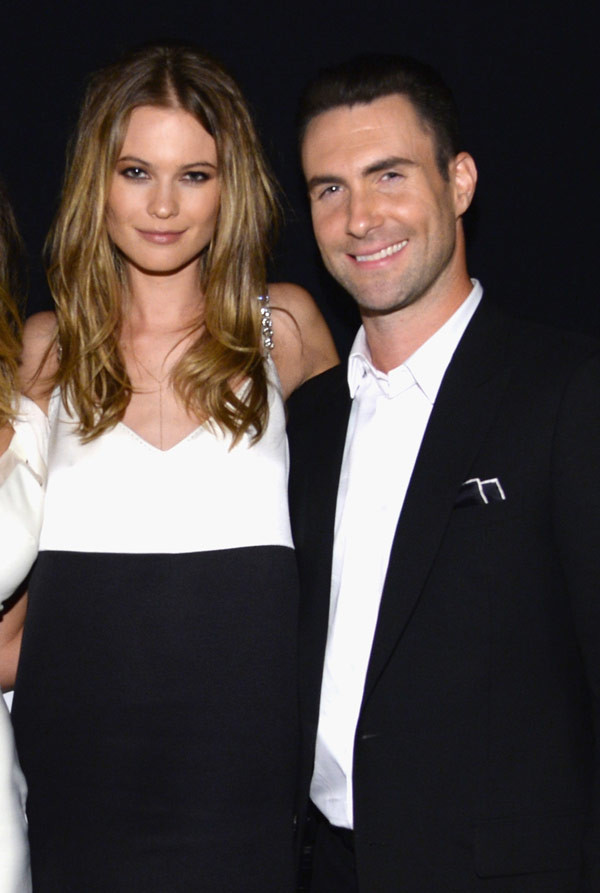 But what is the secret of Behati Prinsloo, who managed to become the best from the best for discerning Adam Levine? 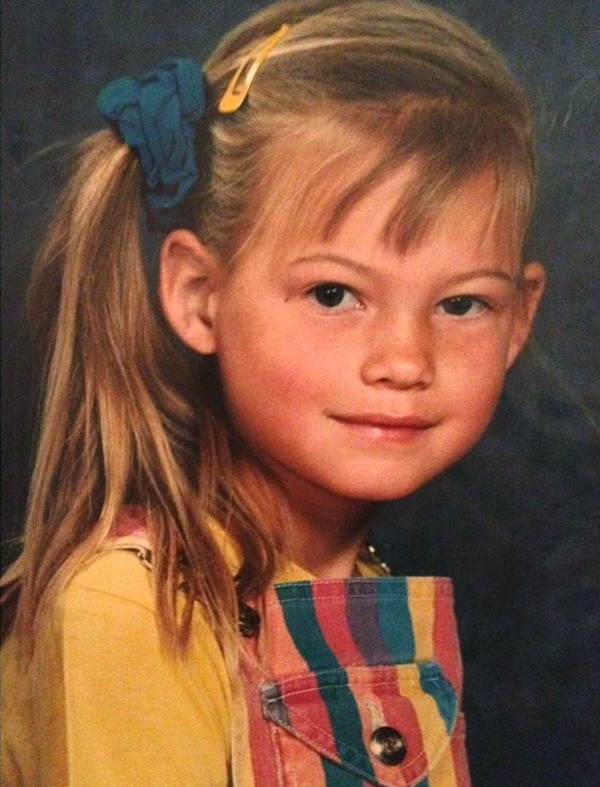 The future top model is the only child of Boet and Magda Prinsloo. She grew up in a family with strict rules – her father, a church minister, tried to bring up a pious and conscience-hugging girl. Her mother ran BnB (bed and breakfast, the establishment, where the visitors can stay for a night and get a nourishing breakfast).

And Behati really tried to be a good girl. She put on neat dresses and visited church, where her father conducted a service, every Sunday. But on all the other days of the week she put on torn shorts or trousers and ran in the yard with her peers. 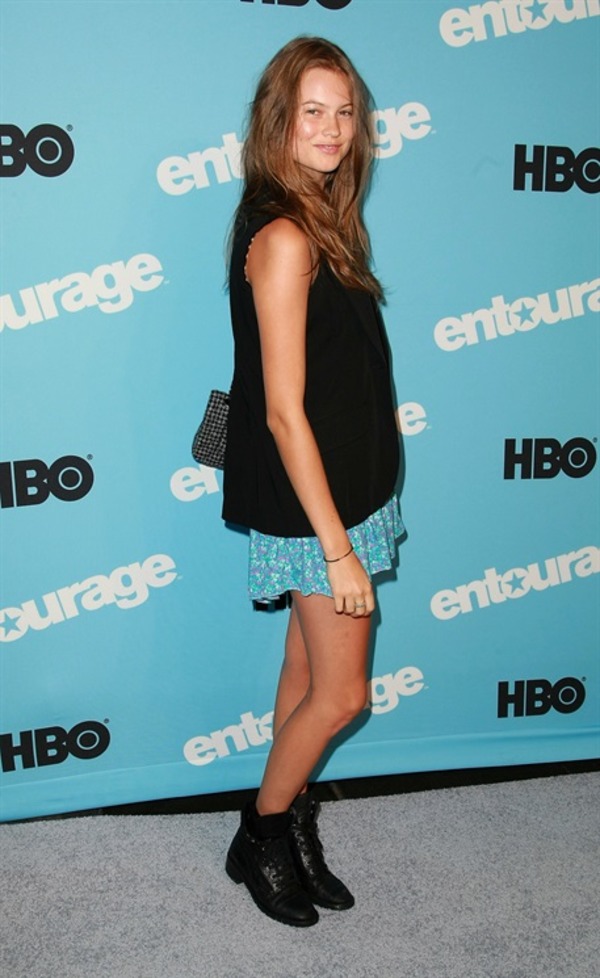 In her interview Behati recollects in mind the early years, “I was very athletic. I went in for gymnastics, hiked and played field hockey”. Prinsloo was active not just in gym, she spent lots of time in the fresh air too. Till now the famous model is in love with her home town Grootfontein, located in Namibia.

Behati Prinsloo dreamed to spend her whole life near her parents, in Grootfontein. But God had another plan. 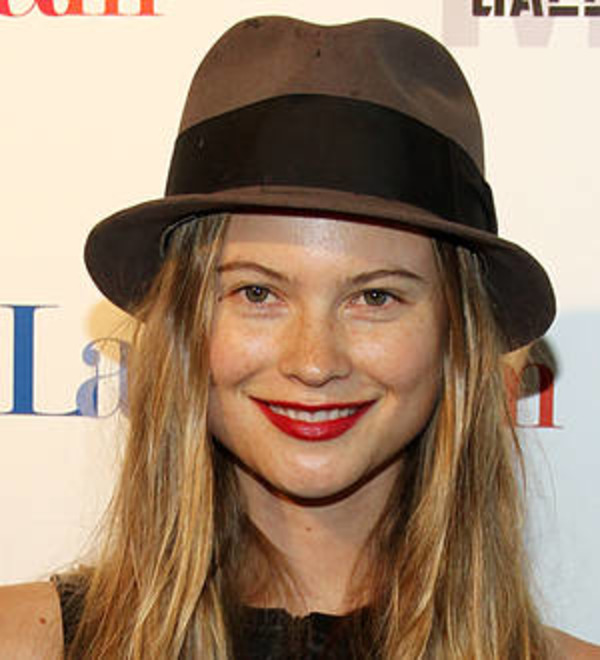 In her teens Behati Prinsloo looked very different from the others. She was tall (the model in 180 cm tall) and very skinny. She didn’t like her too light body. But one day it helped the girl to start absolutely new life.

When Behati finished the 9th form, she and her grandparents went for vacation. They stayed in a port city of Cape Town. Prinsloo enjoyed the rest, sunbathed and visited local shops. In one of those shops she met a fashion photographer. The man worked in Storm Model Management. He was charmed by 16-year-old Behati and immediately left her his visiting card.

Prinsloo didn’t understand anything. She knew nothing about modeling and thought that beautiful leggy girls in glamour magazines were just posing for a photographer and then returned home, where they had some serious occupations, like teaching people or treating them.

She told about the photographer to his grandfather, and the old man forbade Behati to talk to strangers or phoning them.

Thus she returned home and told about the event to her uncle.

Prinsloo’s uncle had another thought. He took the visiting card and immediately phoned to the photographer. Then he convinced Behati’s parents to let the girl return to Cape Town and give modeling a try. 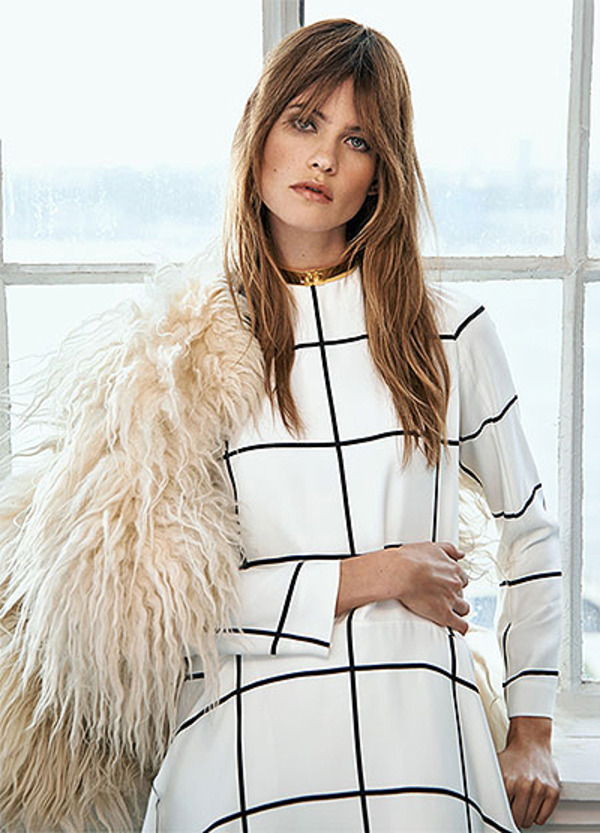 For Boet Prinsloo that was a hard decision. The person of strict religious views, he wanted his daughter to master another profession. At the same time, he understood that it could become Behati’s chance to see the world. Finally, he let her go.

Thus Prinsloo returned to Cape Town, where she started career of a model. For most of people modeling seems the best profession in the world. Really, you do nothing, just wear beautiful clothes at the catwalk and then party. And you get a solid paycheck for all that fun!

But for those, who know the underside of the show business, this job doesn’t seem so easy. At first Behati shared the roof with 6 other models. She posed from morning till night and had to workout a lot to keep her physics. 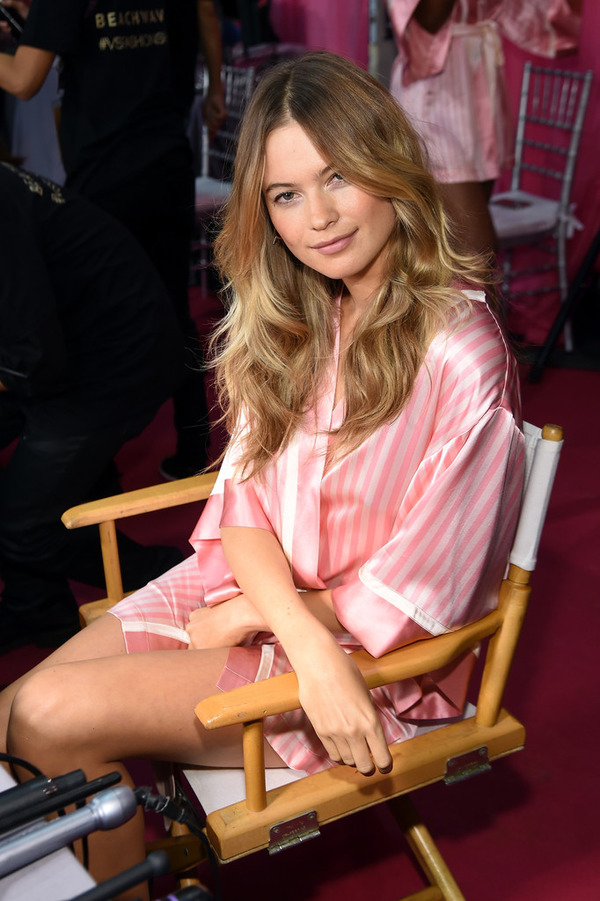 But in spite of all difficulties, Behati Prinsloo remembers that time as the happiest in her life. Everything was so new for her, and she was ready to learn.

In middle 2000s Behati met her big break – she was chosen as Victoria’s Secret model. At first Behati posed for VS sub-brand Pink, supposed for teen girls. In 2009 Prinsloo joined Alessandra Ambrosio and Adriana Lima and became VS Angel. 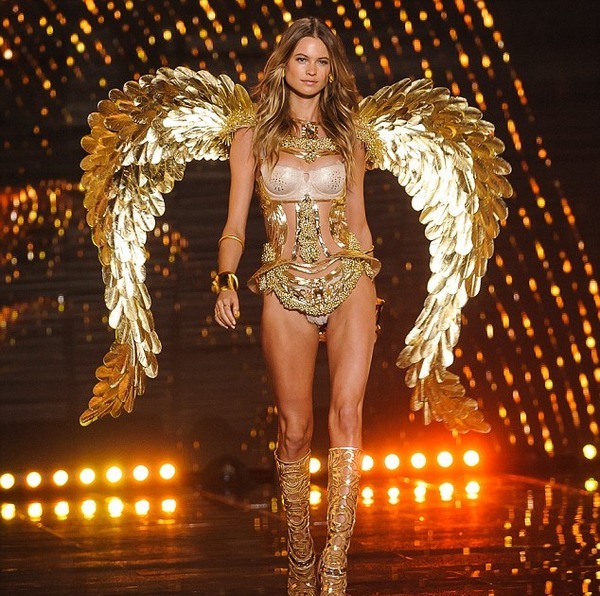 During her years at VS Behati participated in 9 Victoria’s Secret shows and two times in a row she opened it.

Even when Prinsloo gained large experience in modeling, still she remained nervous before each show. In 2015 Behati opened the VS show for the 2nd time. 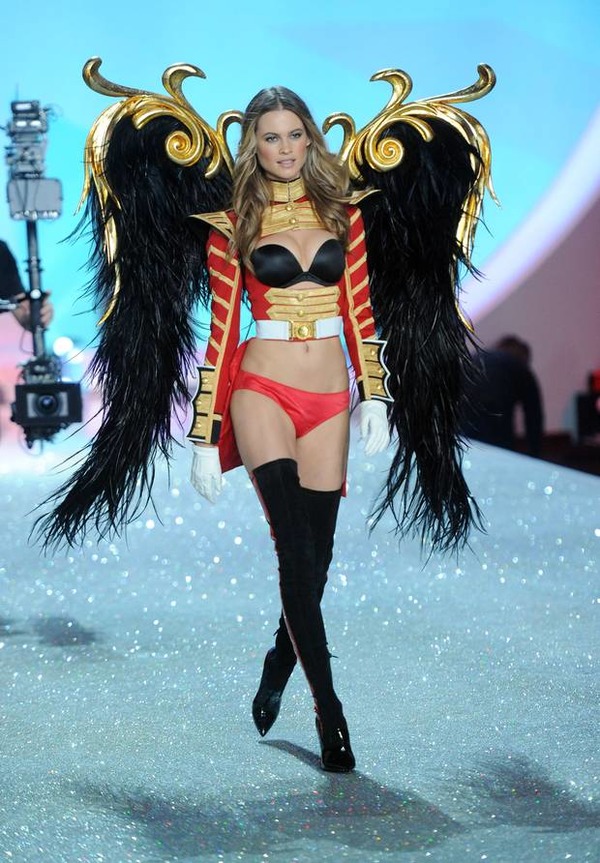 She became one of only three models in the brand history to open the show twice in a row. When Behati returned home, she noticed the huge bouquet of scarlet roses. That was a present from her husband Adam Levine. 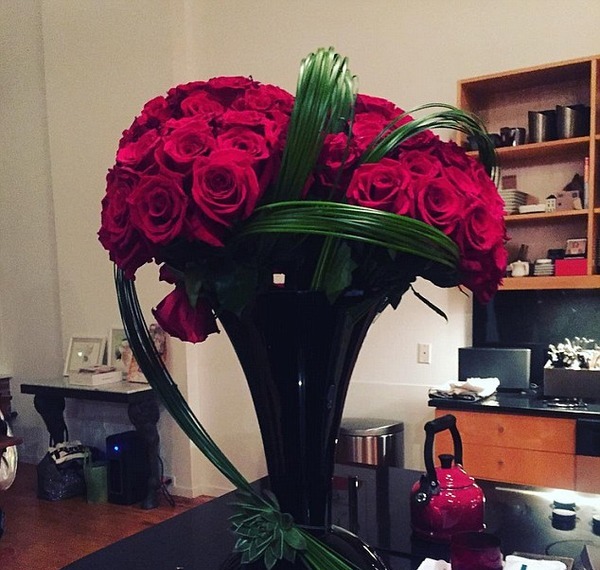 The hot brunette Adam Levine has broken lots of hearts. It is even hard to believe, that now he is perfect loving husband.

It is not known exactly, how Adam met Behati. Some sources tell that he saw the beauty at VS show in 2011, where Maroon 5 were invited as performers. 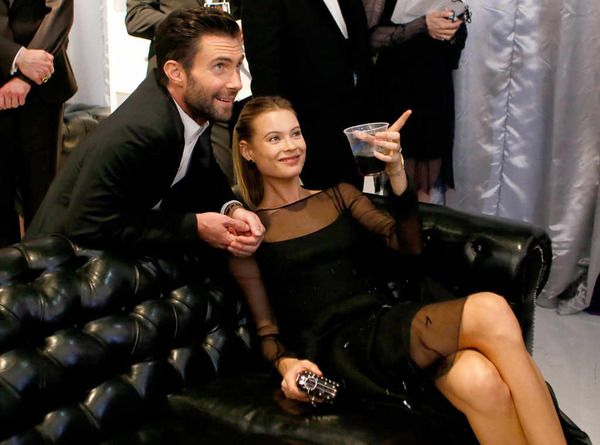 As for Behati, she told press the incredibly romantic story. She had never seen Adam in person, just listened to his songs, when they started to change e-mails. At first their love story started at a distance and only several months later they two met in person.

In any case, the couple started dating in summer, 2012. Then Adam was 35, and he was incredibly popular and unbelievably hot Maroon 5 front man. The friends of the couple say that Behati was head over heels in love with him. That time she was 25, she was extremely hot and very self confident. 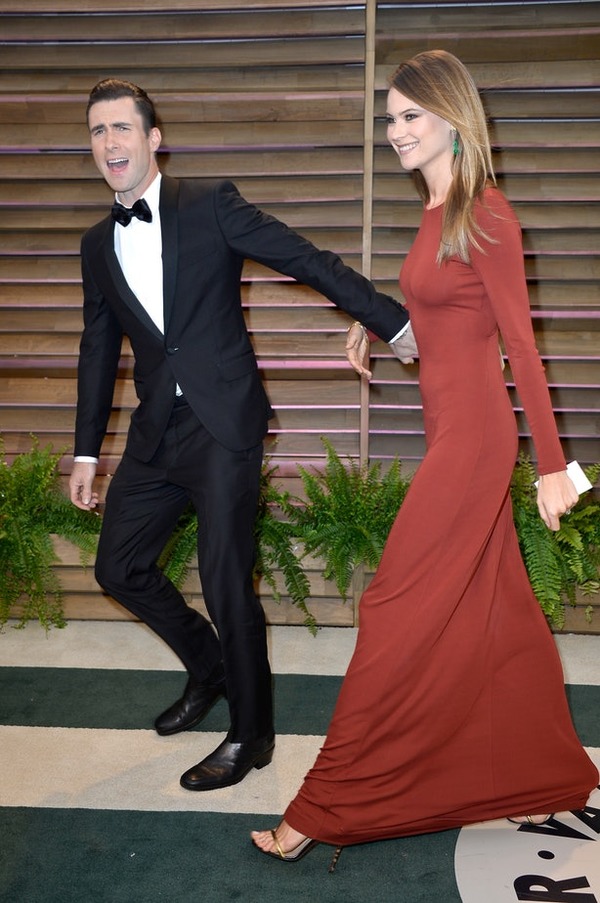 The couple spent their vacation in Hawaii. Once paparazzi photographed them kissing. The fans wanted to know, the details of their affair, but the model and the singer were silent. Levine had just finished his romance with another VS model Anne Vyalitsyna. He didn’t want to publicize his new relationship with Behati.

But in October, 2012 they finally went into the limelight. Behati and Adam visited CQ magazine party in New York. This time it was obvious – they appeared as a couple. Levine held Behati’s hand. She looked perfect in her long black dress. They two were so happy!

Nevertheless in 2013 Levine flirted with another model – Nina Agdal. Adam and Behati had split, but later they made a restart.

In summer, 2013 Adam popped the question. As Prinsloo told later, Levin was so romantic and loving, that she couldn’t resist him.

The musician and Lovelace, Levine proposed to the beauty in an old-fashioned way. He bought a beautiful wedding ring and at first asked Behati’s father for permission to marry his daughter. 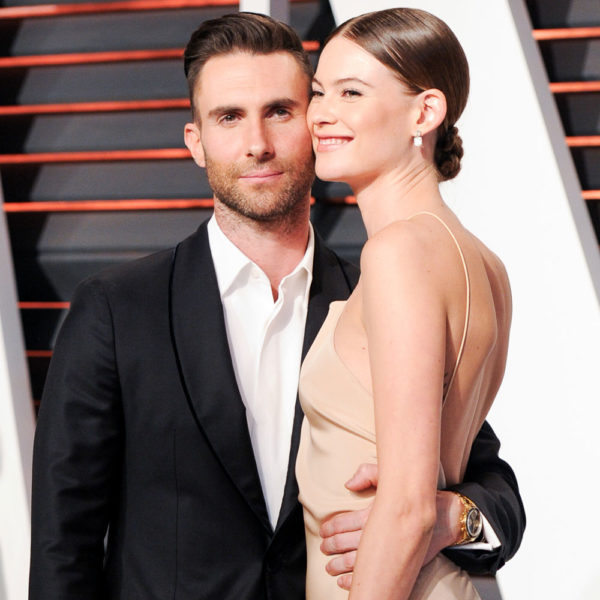 They tied a knot on July 19, 2014 in Cabo San Lucas, Mexico. The bride was dressed in a gorgeous pink dress from Marchesa. That time Behati thought, that it was the highest level of her love. But soon she reached another stage, which was even higher.

Behati Prinsloo Motherhood and Next Level of Love 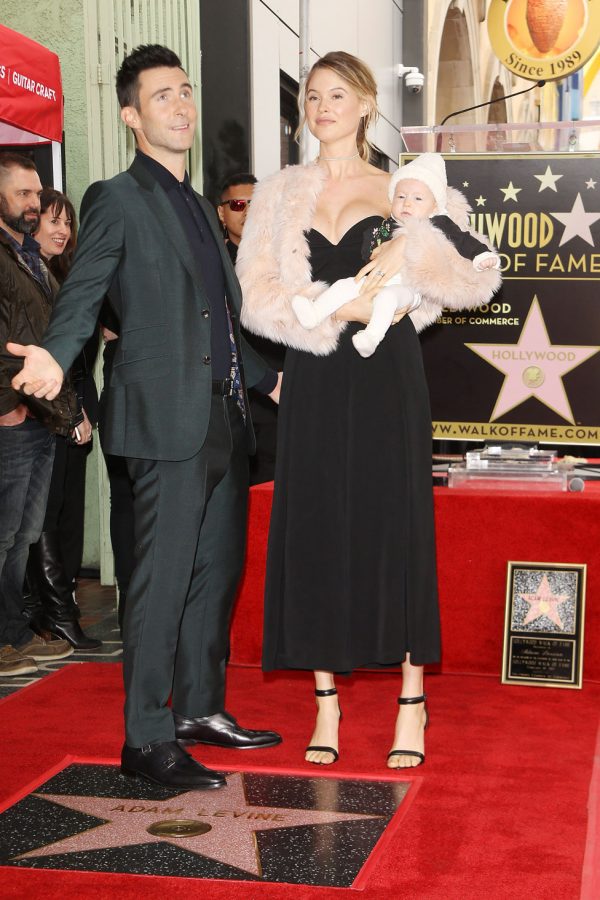 The famous model changed her catwalk appearances for sleepless nights with her daughter, and seemed really happy of it. “My daughter’s smile is worth it”, she tells and then adds, “I’ve reached the new level of love!”

Behati and Adam enjoyed each side of parenthood. They taught Dusty say “Mum and Dad”, crawl and stand on her legs. When the girl was just 5 months old, she has already posed for photographs for the first time.

In February, 2017 Adam was opening his star at Hollywood Walk of Fame. Then his beautiful wife and baby daughter attended the ceremony to congratulate their husband and father. Levine called himself “the happiest person in the world” in his acceptance speech.

Prinsloo planned to come back to catwalks and continue her career of a model, but then she got pleasant news – she was pregnant for the second time. 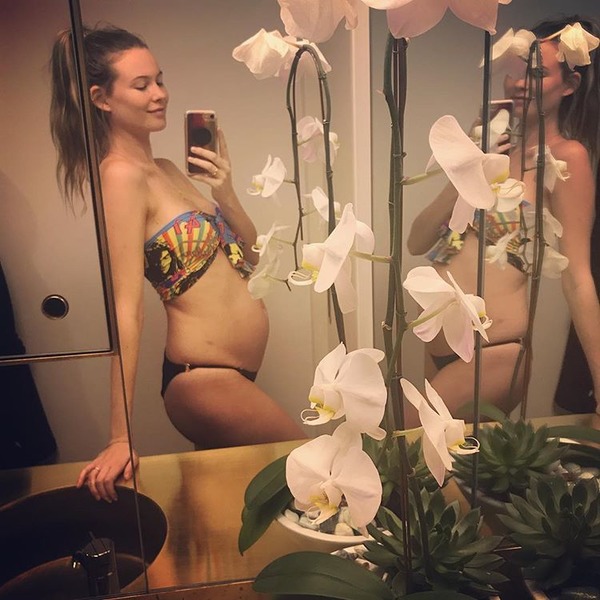 Currently Adam Levine and Behati Prinsloo are expecting their second baby. Behati showed the pic of herself through social media, where she was wearing bikini. The neat round belly spoke for itself.

Thus the girl from Namibia made modelizer Alan Levine a perfect family man.