Home > Celebrity Family > Wife > Antonio Banderas Wives and a Current Girlfriend Nicole Kimpel: Errors Are Made by Everyone, Including Movie Stars

Antonio Banderas Wives and a Current Girlfriend Nicole Kimpel: Errors Are Made by Everyone, Including Movie Stars 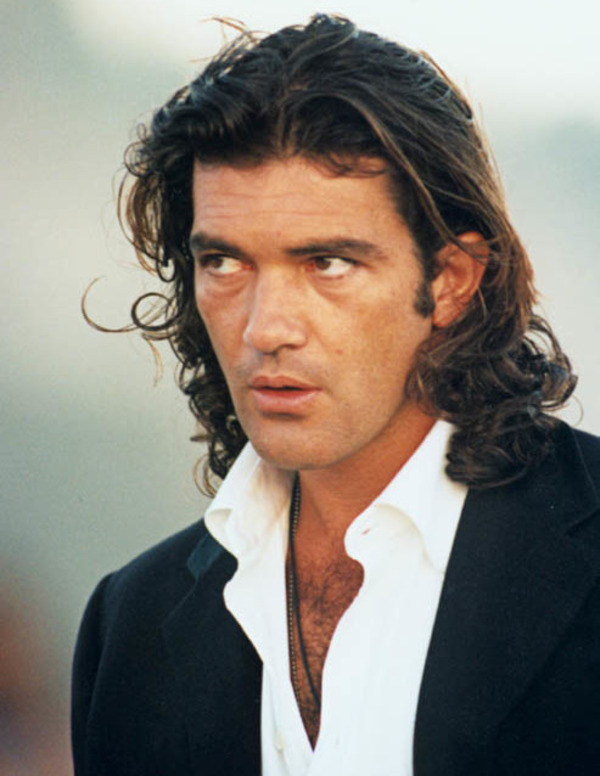 He is a celebrated sex symbol – one of those men, like Ben Affleck, George Clooney or Brad Pitt, who make women all over the world cry with delight. And like many other sex symbols, he has a complicated personal life. But nobody’s perfect – errors are made even by sex symbols and movie stars.

Antonio Banderas used to be an ordinary lad from Malaga, Spain. His father was a policeman and mother was a teacher. In his teens Banderas was good at football and planned to become popular in this area. But he broke his leg – and that was the end of his dream.

Gradually he turned his face to acting – and unexpectedly that new hobby grabbed all his free time.

Soon Banderas moved from Malaga to Madrid, and that period of his life he remembers as “one endless party”. He appeared in Pedro Almodóvar films, which turned a young man into a rising Spanish star, besides he acted in the theater and attended restaurants and clubs.

During one of his visits to the café he met his first wife – a well-educated beauty Ana Leza.

Ana Leza – The Wife Who Knew Him Before Fame 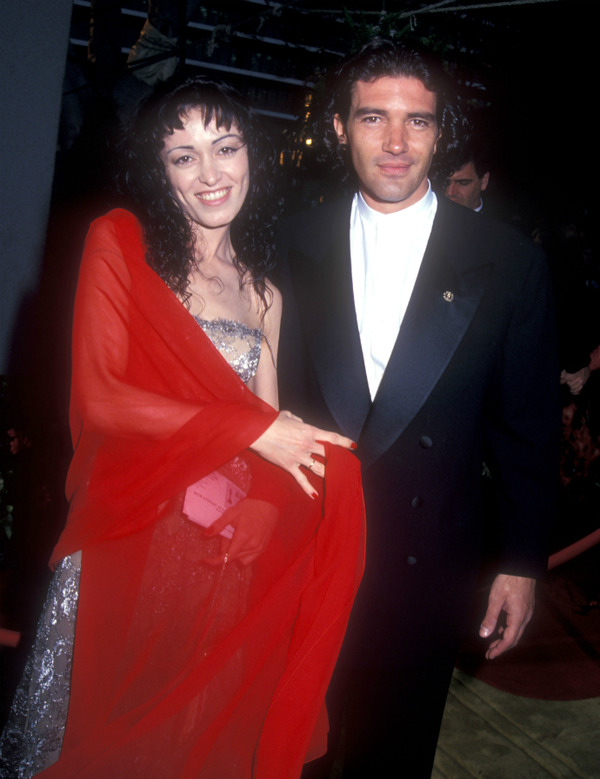 A fragile brunette came to Antonio’s table in a café, when he was having a lunch between the rehearsals. She greeted him, he smiled to her, and very soon Ana was sitting by Banderas side and was telling about herself.

She was an art consultant and also acted from time to time. The daughter of a famous Spanish actress Concha Leza, she wanted to make career in the movie industry, but tried not too hard. 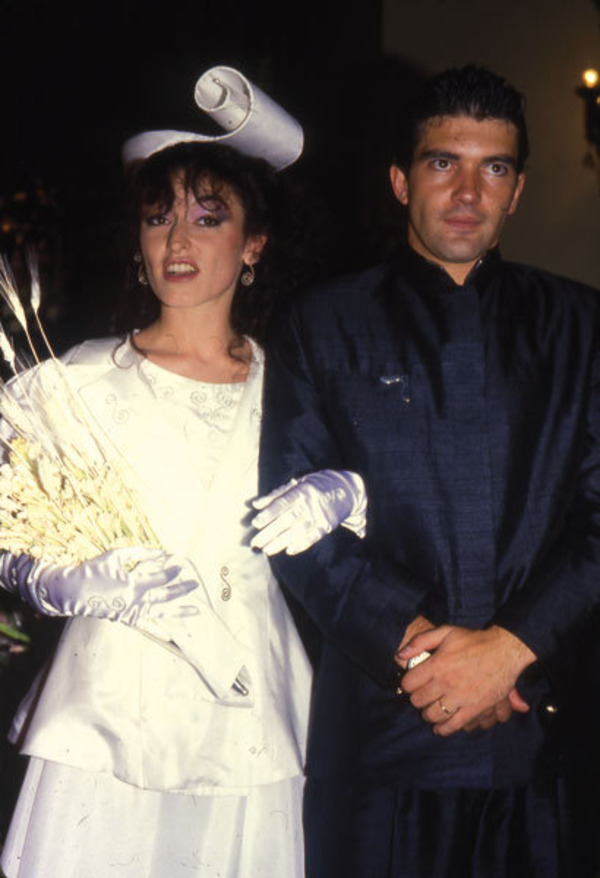 They started dating, and soon Banderas felt that this love affair meant a lot for him. Earlier he dated various women – and very soon forgot their names, but in case of Ana everything was different. For the first time he started thinking about marriage – Antonio imagined Ana in the kitchen, making tasty dishes for him. He even thought about kids.

Banderas, who looked like a filthy boy in Almodovar’s movies, which made him popular, turned to be really sensitive and romantic in his personal life.

He wrote poems for Ana, sang her songs and gave bouquets of nicest-smelling flowers. He proposed her several months after their meeting and in 1986 the couple tied a knot. The ceremony was modest, but very beautiful. Pedro Almodovar was Antonio’s best man. 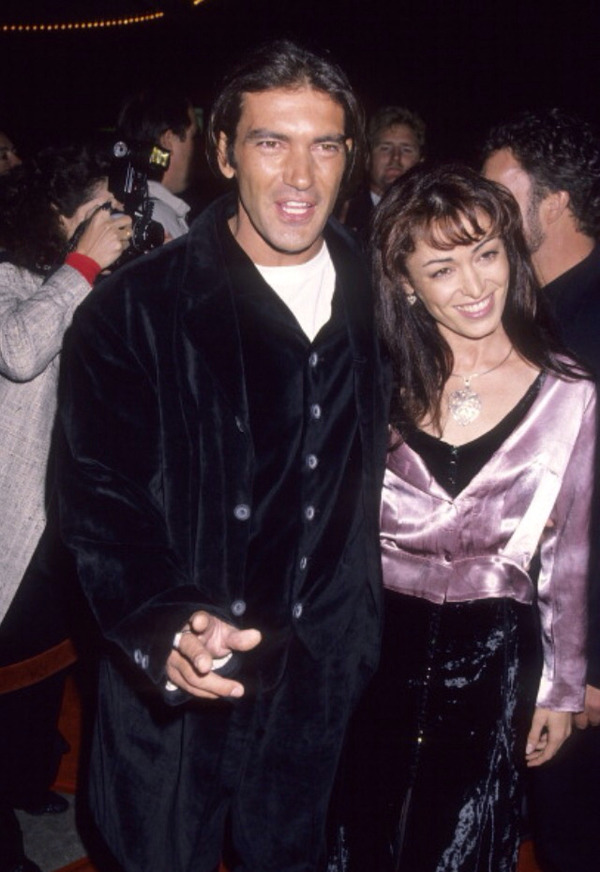 During 5 years Banderas thought that he was the happiest man on the planet. He had everything – a beautiful wife, fame and lots of cash. In early 1990s fate gave him a special gift – that one each European actor is dreaming about – an invitation to Hollywood.

He came home and shared the great news with Leza. He was so happy, that hadn’t noticed her skeptic smile. Banderas didn’t know English, he was an unknown actor in USA and was going to start a new life in the country of the customs he neither knew nor understood. 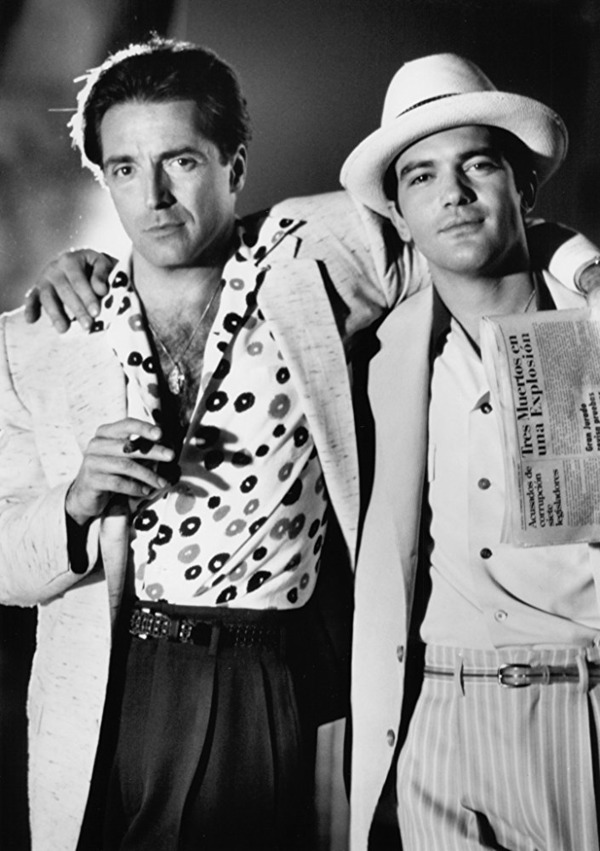 Nevertheless Ana Leza packed her suitcases and moved from Madrid to LA with him. There Antonio was completely involved into filming “The Mambo Kings”. He portrayed one of two brothers-musicians, who played mambo music. Banderas learnt long English phrases, the meanings of which he didn’t understand, and admired the professional work of his co-star – an American actor Armand Assante.

Antonio felt uncomfortable in USA at first, but gradually he fell in love with American beautiful movies and talented friendly people. During one of hard working days at the set he met a well-known American star Madonna. 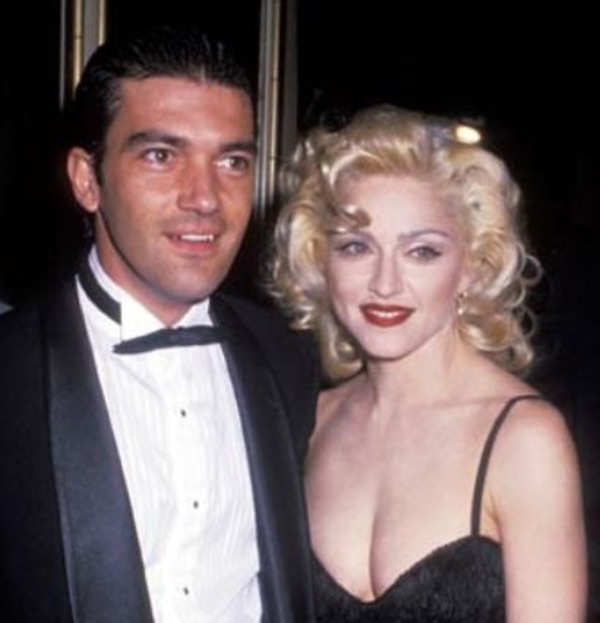 The scandalous singer had designs on a hot Spanish macho, and he liked her too, but Banderas couldn’t speak English and was in love with his wife – that stopped him. 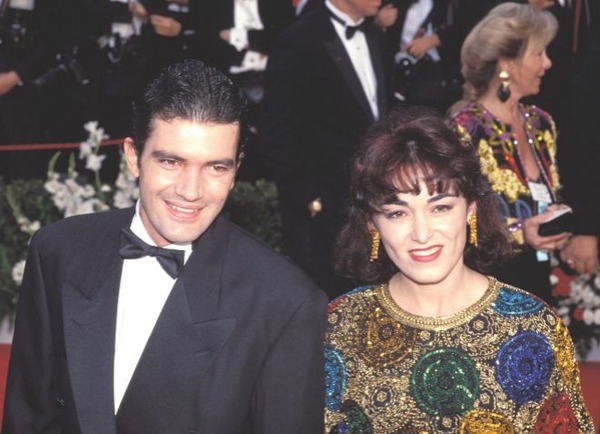 After “The Mambo Kings” he suddenly became popular in USA. Banderas career made a great lip forward – he appeared in the drama “Philadelphia” and melodrama “The House of the Spirits”. Very soon he mastered English and began to speak fluently.

But for Ana Leza that language turned to be too complicated. She tried to get the role in one of American movies, but her greatest success was a tiny role in “Philadelphia” alongside her husband. Leza decided to return to Spain, where she converted to Buddhism. Gradually Ana and Antonio’s ways parted. They got divorced in 1996.

Four years later Ana re-married Dharma Villareal. She still is happy with him.

Melanie Griffith – The Trophy Wife and Mother of His Daughter 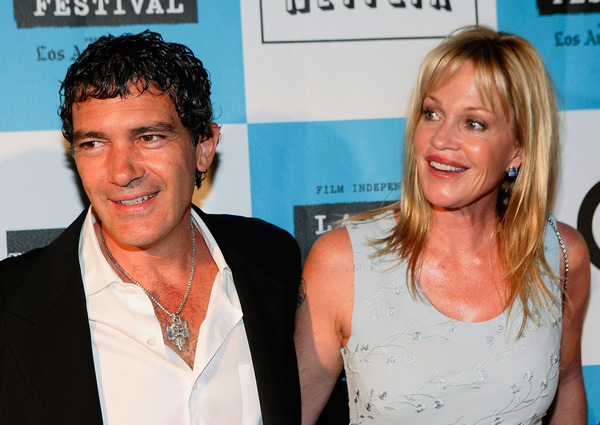 They say Banderas fell in love with Melanie in late 1980s, when he saw the actress at an Oscar party, where he came as a foreign actor for the first time. The tall slim blond in an ivory white dress grabbed his attention. “Who is she?”, Banderas turned his face to Pedro Almodovar. “Melanie Griffith”, the film director answered.

They met again at “Two Much” film set and this time he couldn’t let her go. They started dating and then got married in London. 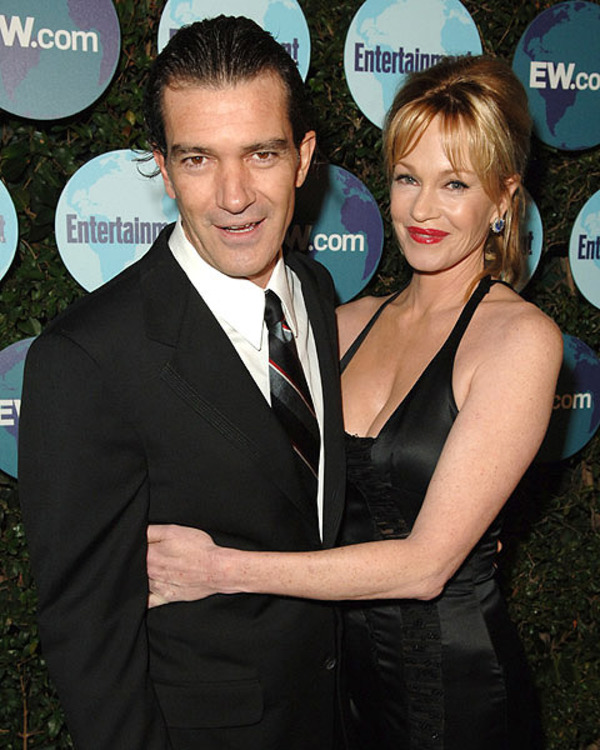 Both had just separated from the previous partners (he divorced with Leza, and she left Don Johnson, with whom Melanie had a daughter Dakota Johnson). That’s why their wedding ceremony in May, 1996 was very closed and modest. Melanie Griffith had already been pregnant with their daughter. Soon she gave a birth to her third and Antonio Banderas first and only kid – the daughter Stella. 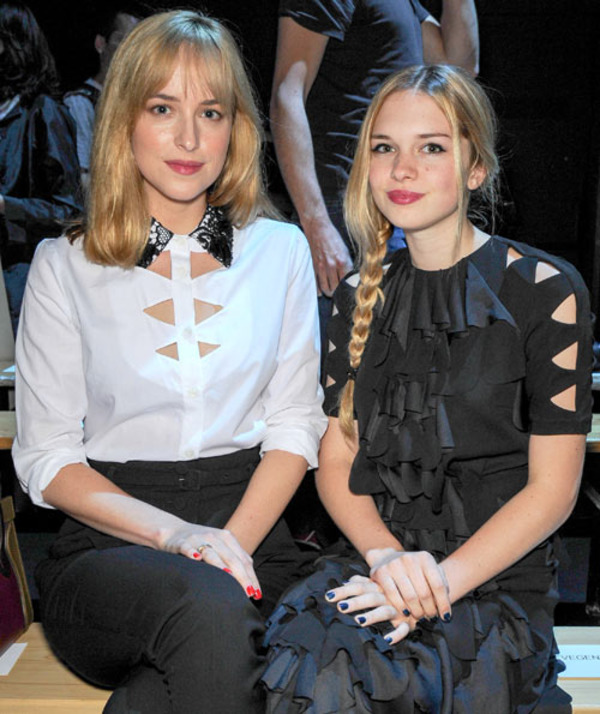 For many people their marriage looked weird – and they were predicted a soon split. Really, Antonio and Melanie were so different – he was a boy from an ordinary Spanish family and she was a daughter of a famous actress and model Tippi Hedren.

Her mother moved to New York at a very young age to start modeling. Later she had become a muse of a cult film maker Alfred Hitchcock. Tippi was married four times in her life, but she gave a birth to just one child – Melanie Griffith.

Tippi was too busy with her career, marriages and later with animal rights activism – and her daughter was not the first point in her list of priorities. Melanie was a girl with a high level of anxiety, and she tried to cope with her fears with the help of alcohol and drugs. 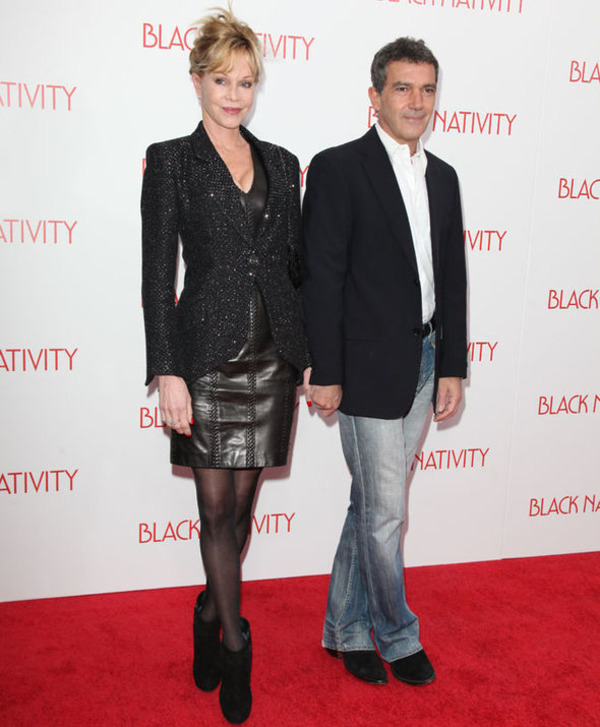 Friends advised Banderas to keep away from that beautiful, but unreliable woman. But he was in love and was ready to support his stunning wife.

They spent together long 18 years. During that period Melanie Griffith was sent for a rehab and had lots of plastic operations, which made her face swollen and lips bloated. In addition, the actress turned to be a really jealous wife. When Antonio was cast as Luis Antonio Vargas into Michael Cristofer thriller “Original Sin”, Melanie begged him to cancel the deal and return home. The reason was Banderas hot co-star Angelina Jolie. Griffith didn’t trust her husband and got really furious, when had read the rumors about their love affair in one of the newspapers. 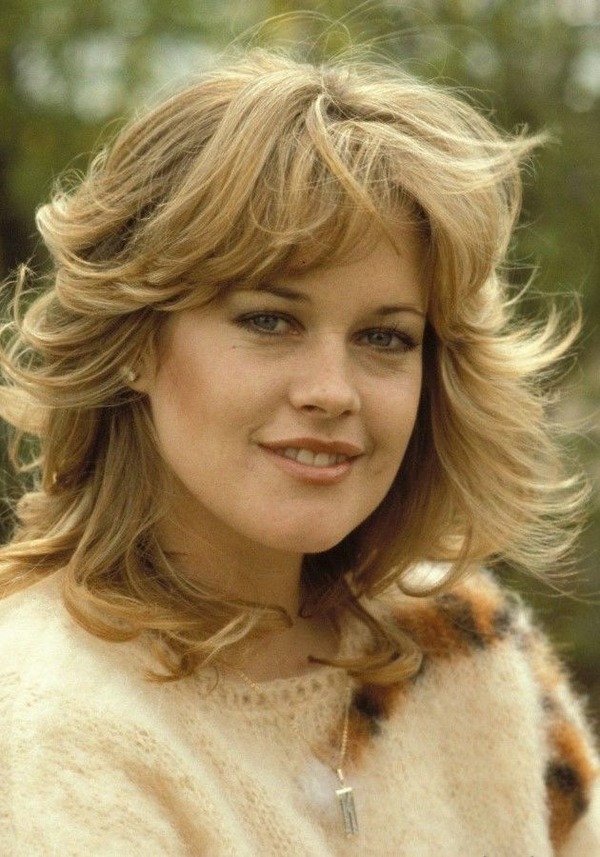 Banderas swore Griffith that it was just a fiction of some journalists, who wanted to gain popularity, using the hot facts. But Griffith arranged scandals and couldn’t believe her husband.

In spite of all Melanie’s drawbacks he loved her and believed, they would always be together. But …

In 2014 they separated and a year later signed divorce papers. Journalists attacked Banderas and tried to make him tell about the reasons of their split. But like a real man, he was silent. 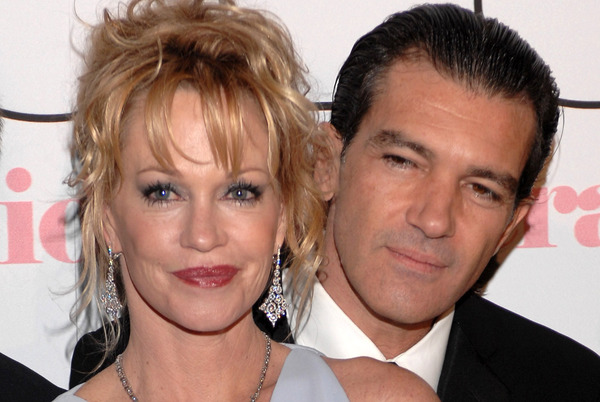 Nevertheless he opened up about his next girlfriend Nicole Kimpel.

Nicole Kimpel – His Award For The Trials of Life 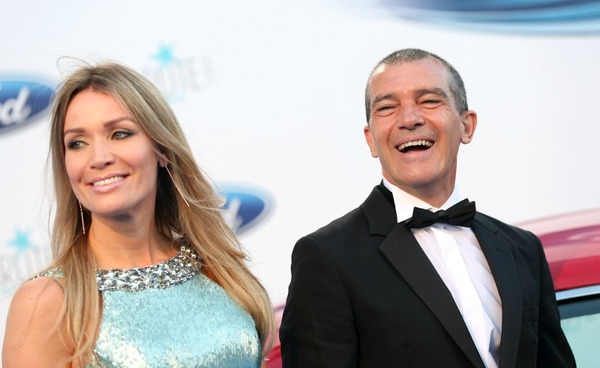 Nicole Kimpel looks like a model, but she earns her living as an investment banker. She comes from Denmark, is taller of her loved one and 20 years younger him too. Antonio didn’t share the details of his first meeting with Nicole, but he described her as “shy” and told that he was happy, she had nothing in common with movie industry.

Although Nicole and Antonio are not married, still they are very close. The couple used to spend a lot of time in London, where Banderas attended Central Saint Martin’s college. He studied design in order to launch his own fashion line. 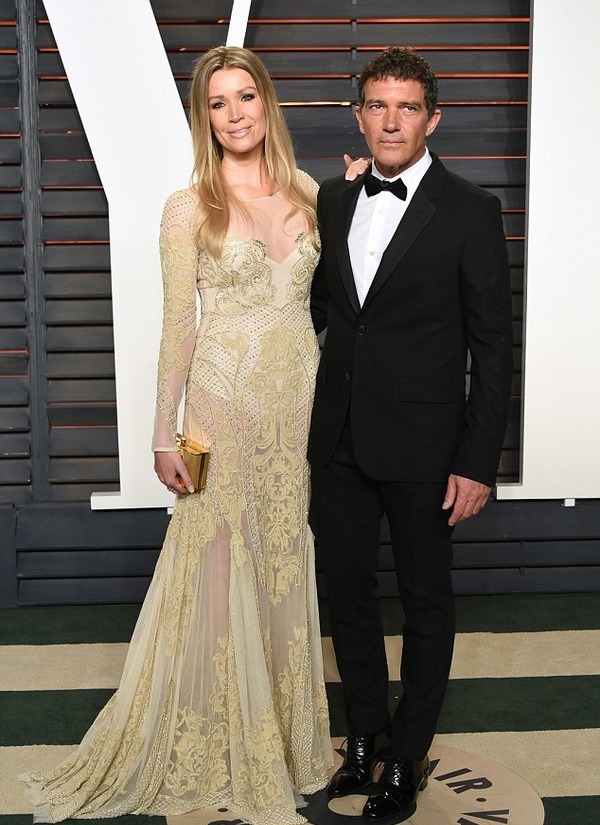 Till now Antonio Banderas has a busy schedule. He has starred in the films “The 33”, “Black Butterfly”, “Bullet Head” etc.

Nicole constantly accompanies the movie star at various red carpet events, and looks even better than her stellar boyfriend. 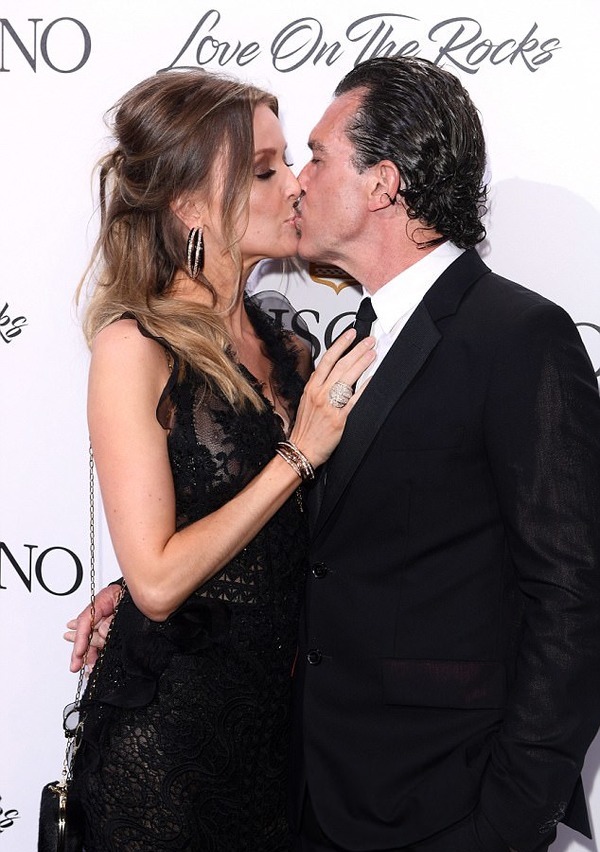 They don’t share their plans for future, but surely, Nicole and Antonio are pleasant to look at.