Arnold Schwarzenegger Kids: Is It Easy To Be Celebs’ Scions? 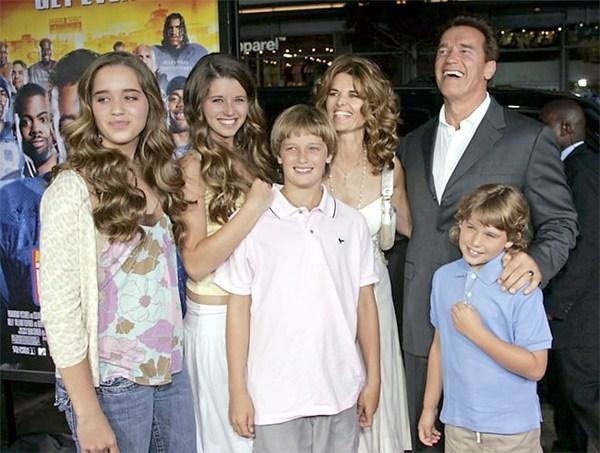 Look at the photo above. This is Arnold Schwarzenegger, a famous politician and actor, his wife (now former), a journalist Maria Shriver, and their four children – Katherine, Christina, Patrick and Christopher.

Arnold Schwarzenegger children often become the source of envy for others. They are sometimes called “golden kids”. But has the stellar dad always provided his scions for everything necessary (and this time we are talking not about Versace clothes or expensive cars)?

It is not known whether Schwarzenegger was a good father – but certainly he was a prolific one. In addition to four children from a legitimate wife, the Terminator also has a son Joseph Baena, born from relationship with a maid. It was Joseph who caused the divorce of the Iron Arnie with his wife of 25 years Maria. 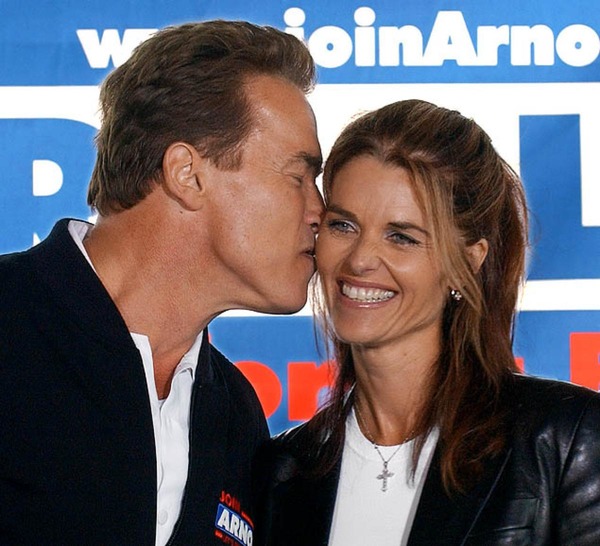 So what do we know about Joseph, Katherine, Christine, Patrick and Christopher? And is it easy for them to be the children of their famous father? 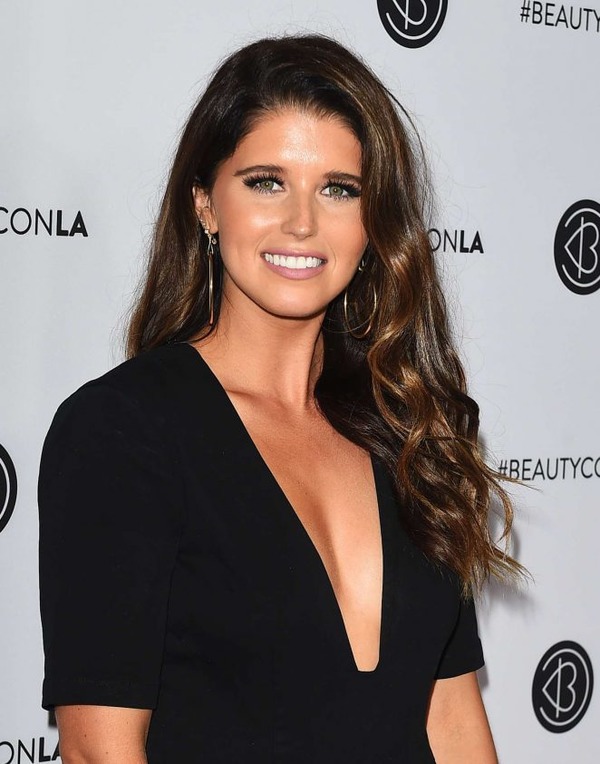 When Arnold Schwarzenegger returned home after filming “Conan the Barbarian”, his girlfriend Maria Shriver gave him a Labrador puppy. She called the dog “Conan”, thus expressing her respect to the first really successful film of her boyfriend-bodybuilder. However, one of Maria’s friends told Arnie: “In fact, she just wants to know if you can handle kids!”

The first baby of Arnold Schwarzenegger – daughter Katherine – was born on December 13, 1989. Arnold comes from Austria, where the father does not deal with the process of baby delivery, so it cost him a lot of efforts to break this rule for himself and watch his wife giving a birth, as Americans do.

Iron Arnie later confessed, that when he took his tiny newborn daughter in his arms for the first time, he cried like a romantic weak-willed fellow. Maria, on the other hand, was absolutely calm and very happy. She believed that Katherine was her and Arnold’s first big deed, which they completed together. 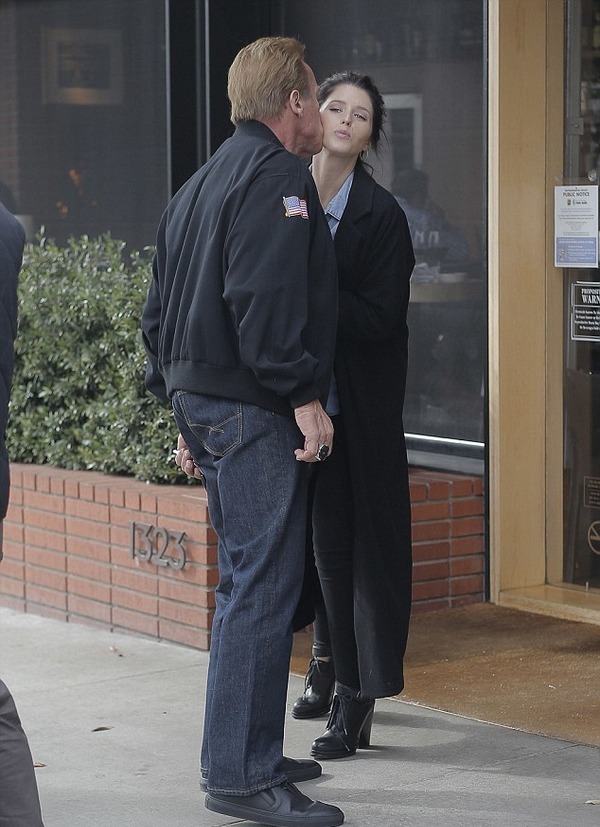 The girl got the second name “Eunice” from her maternal grandmother, who was the sister of US President John F. Kennedy.

The girl spent her early years in Los Angeles, where visited high school and attended dancing lessons. In 2010, being just 20 years old girl, she published her first book “Rock What You've Got”, where she shared the secrets of self-confidence and self accepting. 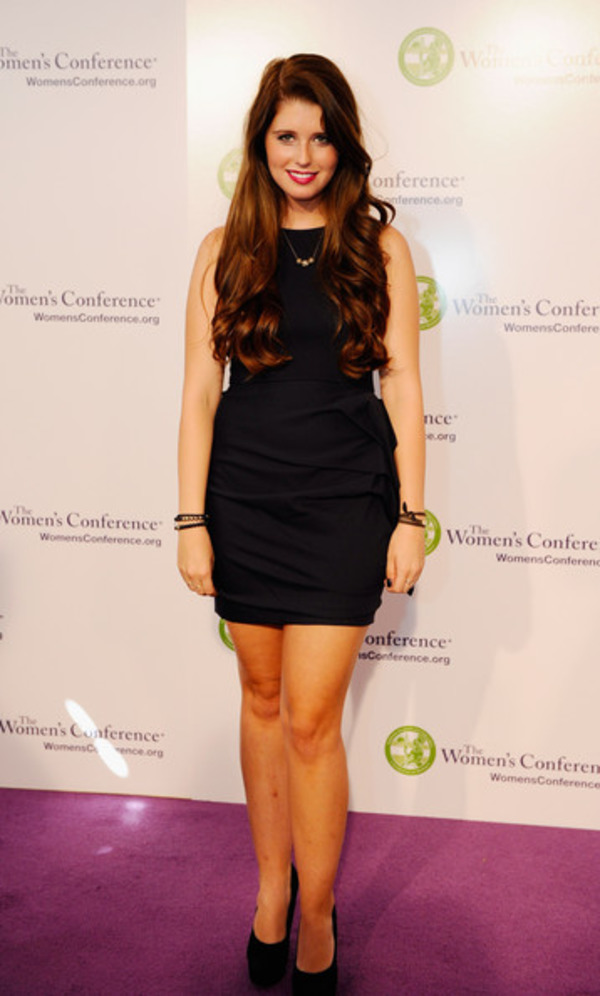 Katherine Eunice graduated from University of Southern California, where she studied journalism. She continues making career of an author.

Schwarzenegger eldest daughter spends a lot of time with her younger sister Christina.

Maria Schriver has always been a perfect mother – she read lots of books on child up-bringing, cooperated with children’s nurse and controlled the situation from top to bottom. That’s why Arnold felt a little estranged from caring of his first baby daughter Katherine. 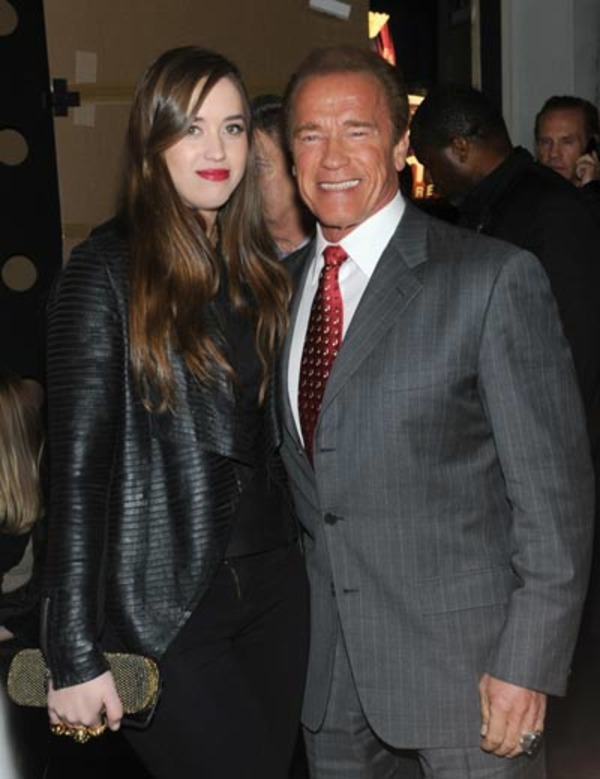 That’s why he decided to become a perfect father for his second daughter – Christina. She was born on July 23, 1991 in one of prestigious hospitals in LA.

Christina helped Iron Arnie to make a great progress as a father. Very often Schwarzenegger put his small daughter on his wide chiseled chest and lied on his back for hours. The strong hot actor Arnold had even learnt how to change diapers. He took the girl from Maria’s careful hands and did everything so typical for a father and untypical for a Hollywood star – changed her tiny clothes, bathed her and played with her. 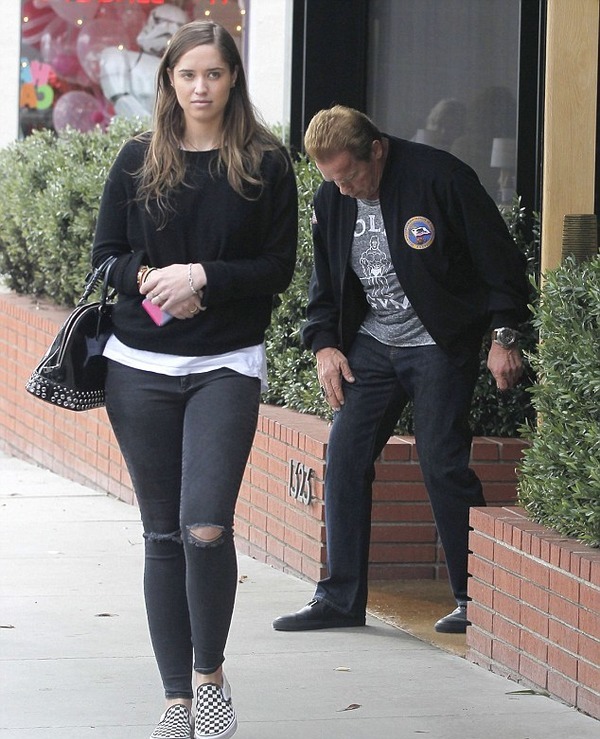 Like her older sister, Christina attended a prestigious school. Having graduated from there, she entered the Georgetown University. Schwarzenegger’s daughter got a diploma in 2013 and then returned to LA. Currently she works with her father.

In his book “Total Recall” Arnold Schwarzenegger tells, that his wife Maria was unbelievably happy, when she knew, she was going to have a son. That’s why Arnold had to struggle with her for his right to bring up his son according to his own rules. 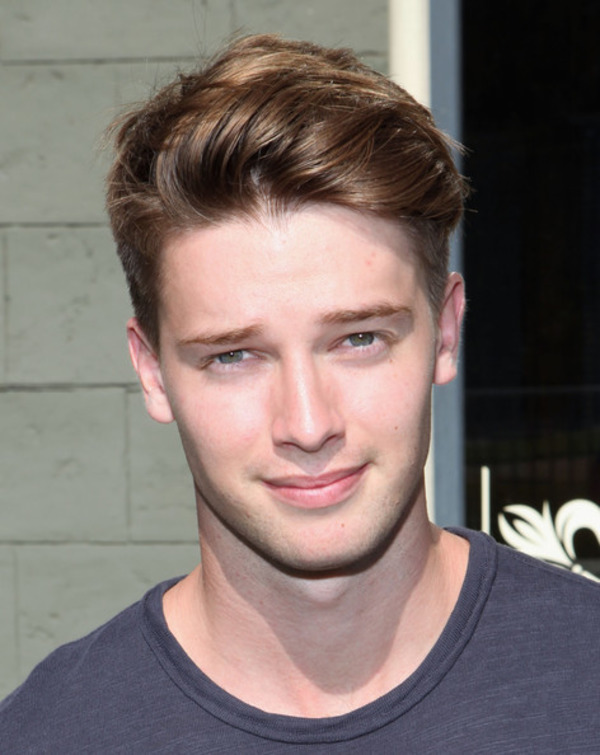 Patrick Schwarzenegger was born on the 18th of September, 1993. Arnold was proud of the fact, that he had become the father of a small cute boy. He spent lots of time with his kid – and finally got an opportunity to change Barbies for toy knives and guns. Playing with Patrick served as a great source of pleasure for Arnie.

Nevertheless he had to leave his scion for a while – to film “True Lies”. In early 1990s Arnold climbed his career peak. Austrian-born actor has become a real symbol of American movie industry. 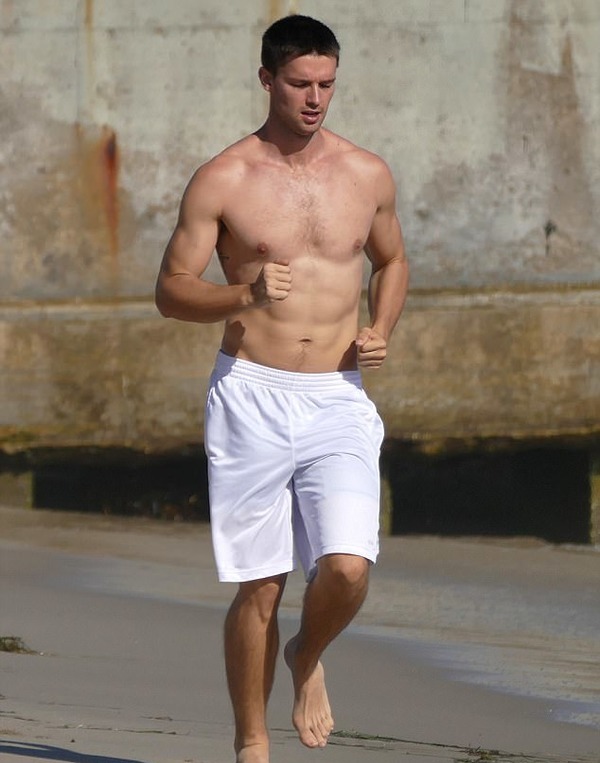 Patrick inherited his father’s passion to show business. He is the only child of Arnold Schwarzenegger, who followed his father’s path and became a model and actor. Patrick has already participated in Hudson Jeans ad campaign and plans to model for Armani.

He has already starred in a number of screen projects too. The most popular of them are the series “Scream Queens”, the adventure drama “Dear Eleanor” and the romantic movie “Go North”. 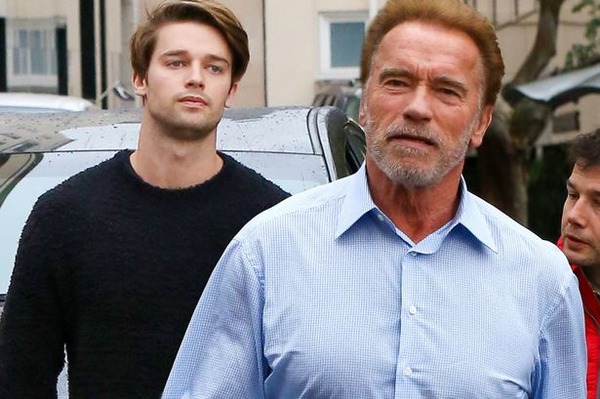 Although Arnold and Maria separated, Patrick tries to share his time between father and mother homes. He remains Arnold’s friend, while his father Christopher is rather dad’s opponent.

Probably, Christopher Schwarzenegger turned to be the most complicated kid for his parents. While expecting him, Maria Schriver was taken to a hospital because of severe toxicosis. That event made Iron Arnie nervous, that’s why he decided to make a pause in his career and stay at home with his kids. 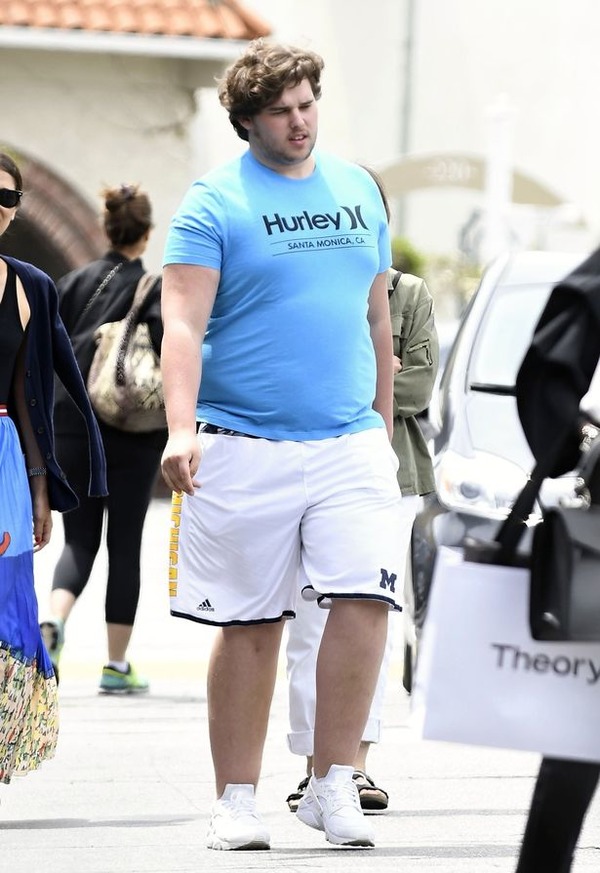 Every morning he took kids to the hospital, where Maria was treated. Arnie cut a fresh rose from a big bush in his garden and gave it to his wife.

Maria Shriver and Arnold Schwarzenegger welcomed their fourth baby on the 27th of September, 1997.

From the very beginning Christopher had become his father’s main opponent. If for Patrick Arnold was a role model, for Christopher he was person, made of different cloth. 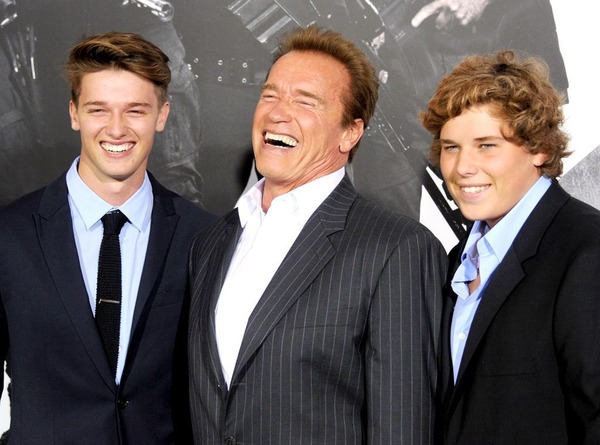 First of all, Christopher Schwarzenegger has never been interested in bodybuilding. He preferred reading and surfing. That hobby brought the boy lots of harm – once he fell from the board and got a severe injury.

From that moment the fourth Arnie’s kid concentrated his mind on studying. He is the only Schwarzenegger child, who can’t boast with a great athletic stature. 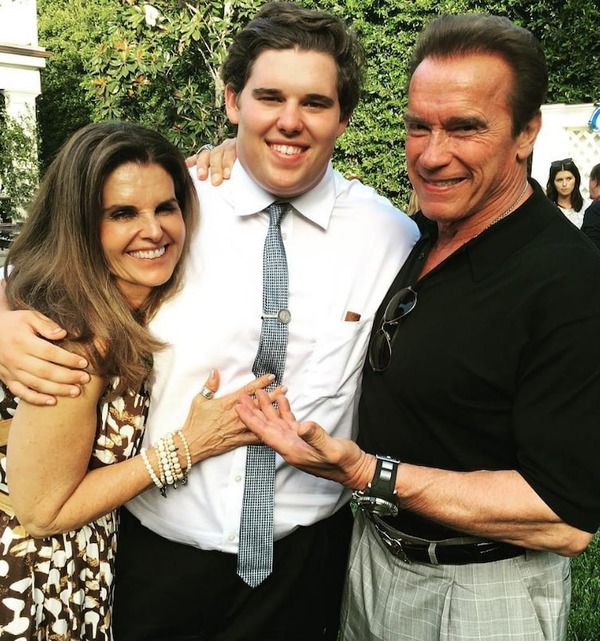 When Arnold Schwarzenegger and Maria Schriver started the divorce process, Katherine, Christina and Patrick tried to maintain neutral, while Christopher openly supported his mother. He even planned to change his surname for “Shriver”. 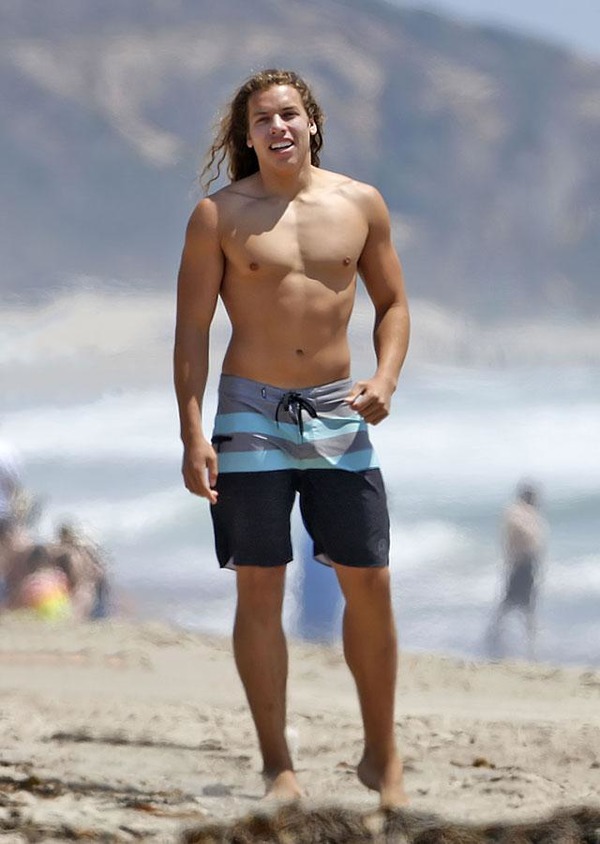 In winter, 1997 Maria took kids and went for vacation. Then Arnold and the maid Mildred remained alone in the house. That caused a short affair between the popular actor and his house worker.

When Mildred’s pregnancy became obvious, she told, that the baby’s father was her husband. Arnold tried to believe, that Joseph was not his kid. But the boy looked exactly like his dad – and soon Scwarzenegger understood, that Joseph was a result of his sudden passion to Mildred. 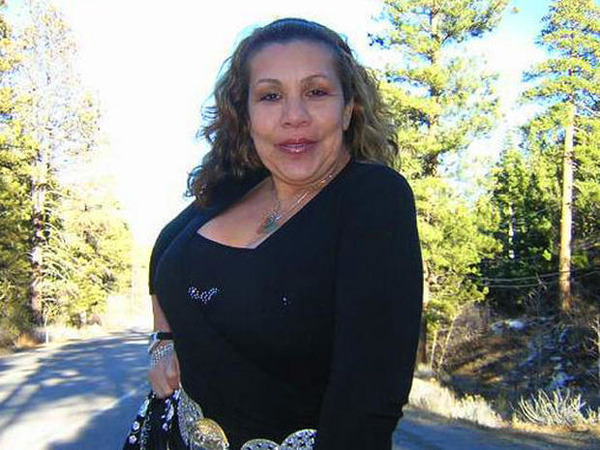 From that moment Joseph became Arnold Scwarzenegger’s secret. He paid for his education and supported Mildred financially. Soon her husband left her, and she remained alone with her kids.

Maria knew about Arnie’s secret child much later. She also noticed that Baena looked like Swarzenneger in his youth. Shriver had a long private talk with Mildred, and the maid opened up about her affair with Arnold. 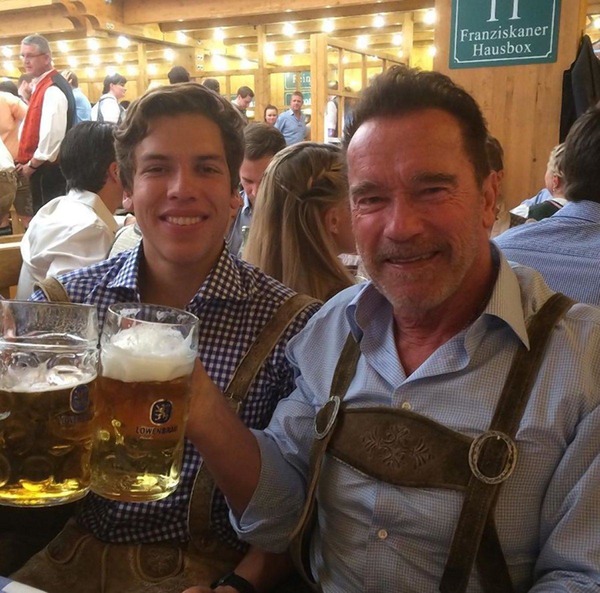 That caused the end of Scwarzenegger-Shriver marriage. Till now Arnold regrets about his divorce to this bright talented woman.

He spends a lot of time with Joseph Baena and even trains with him. 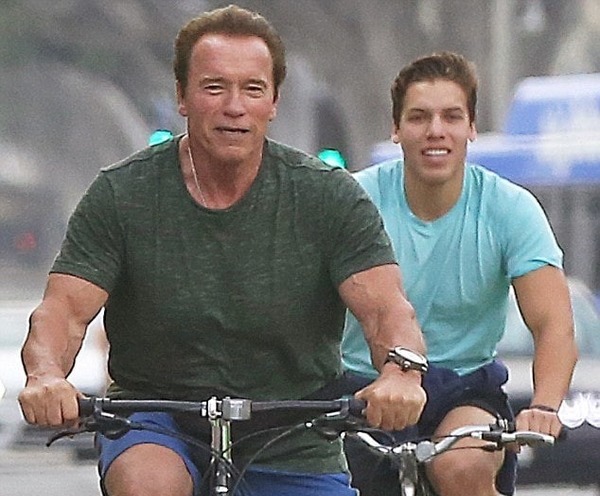 Arnie tries to be a good father for his five children.

But is it easy to be Arnold Schwarzenegger kid?

In his autobiography Scwarzenegger shared his methods of kids up-bringing. In spite of his wealth, he tried to show his kids, that they must be careful with money. He taught his children to do laundry, to take off shoes near the front door and switch off the light after leaving the room. 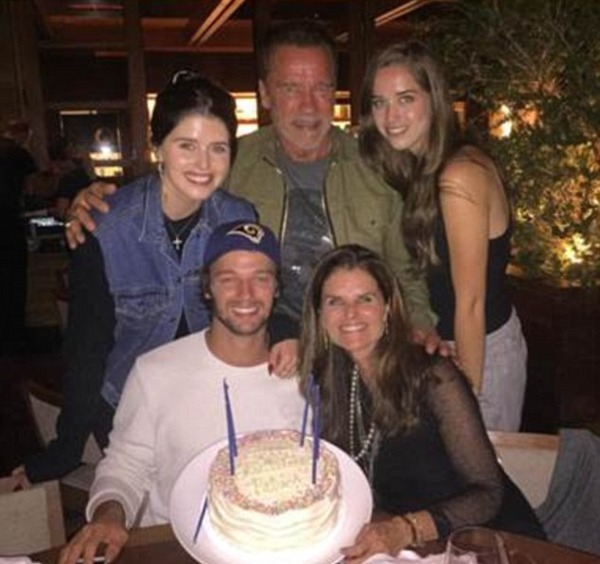 Nowadays Arnold Scwarzenegger spends lots of time with his kids. In any case, they are his main joy and source of inspiration.