Blake Lively Husband Ryan Reynolds: “It’s possible to get married after sex on the first date!” 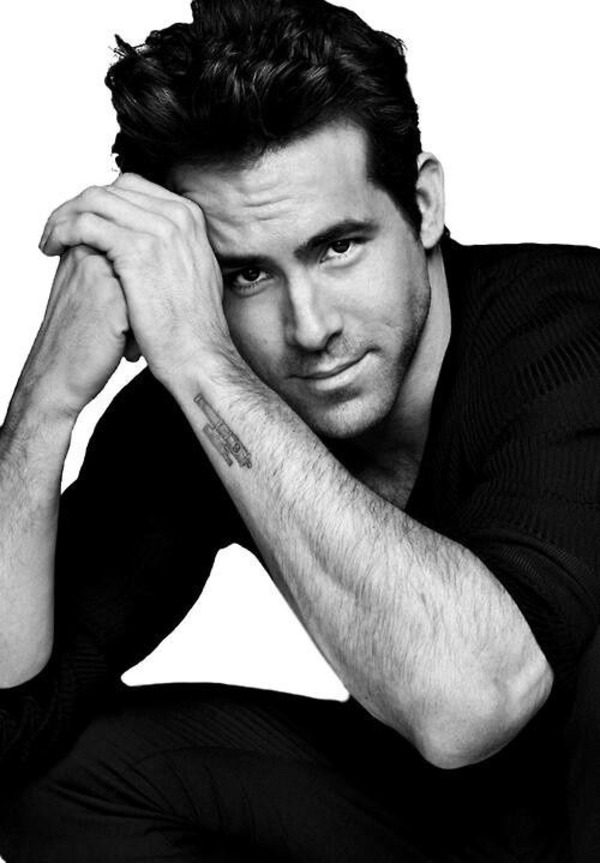 PiNetworth team doesn’t recommend you to have sex on the first date, but surely sometimes the big love starts from it! According to Blake Lively husband Ryan Reynolds, he and Gossip Girl star appeared in bed on their first date. Blake was a good sex partner, and it helped Ryan understand, that she was the one for him.

No wonder, that Ryan Reynolds proposed the hot blonde. Blake Lively is undoubtedly one of the most beautiful actresses of all times. She raised to fame as Serena van der Woodsen, the girl from Upper East Side, who dated Penn Badgley screen hero Dan Humphrey, the representative of a poorer family and the son of her mother’s ex-lover. After Gossip Girl success, Blake moved on and appeared in many other screen projects. We know her as Robin Wright young version in “The Private Lives of Pippa Lee”, as non-aging lady in “The Age of Adaline” and as Ben Affleck screen girlfriend in “The Town”. 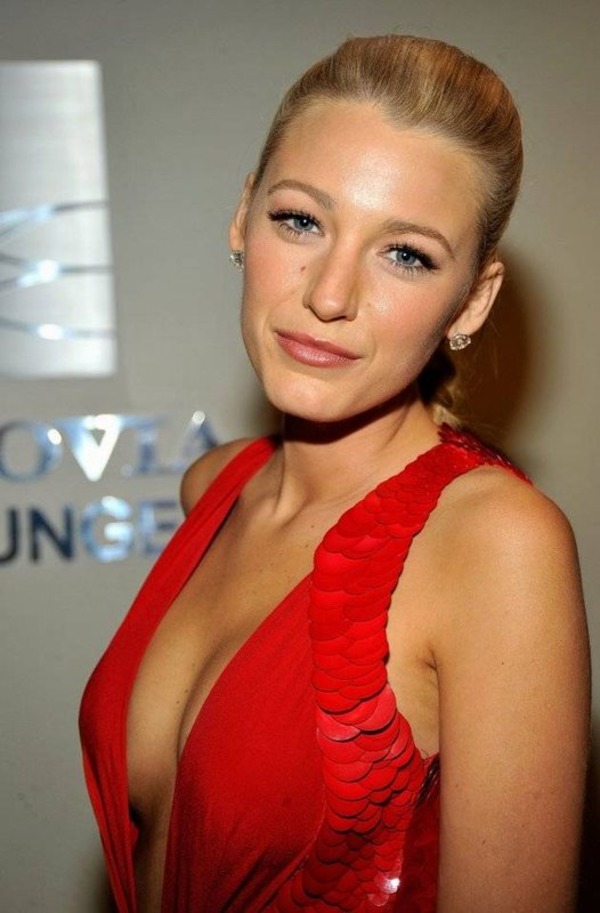 Really, Blake Lively is a talented actress, but she hasn’t acted too much recently. The reason is her busy family life. The mother of two small daughters, Blake Lively spends the most part of her time in a big house in the suburbs of New York. She seems to be a happy mother and wife. But what do we know about her husband Ryan Reynolds? 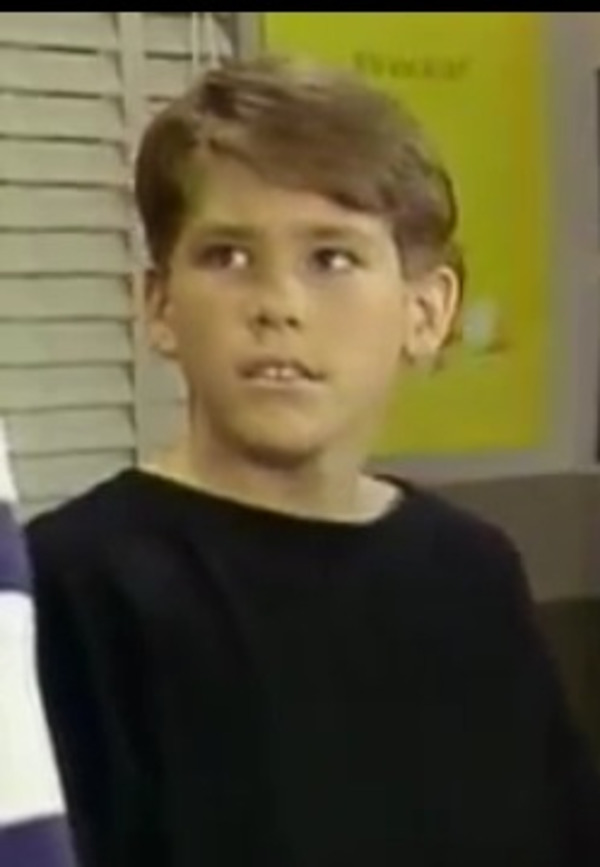 We know Ryan Reynolds as the talented versatile actor, who can be romantic (like in “The Proposal”), who can be dangerous (like in “X-Men Origins: Wolverine”) and who can be funny (like in “Van Wilder”). Did you know that Ryan dreamed to become an actor since he reached primary school age?

Unlike his famous wife, Ryan Rodney Reynolds doesn’t come from the family of entertainers. He was born on October 23, 1976 in Vancouver, British Columbia, Canada. His father made his living as a wholesaler and his mother was a sales clerk. Ryan was the fourth (youngest) kid in his family. 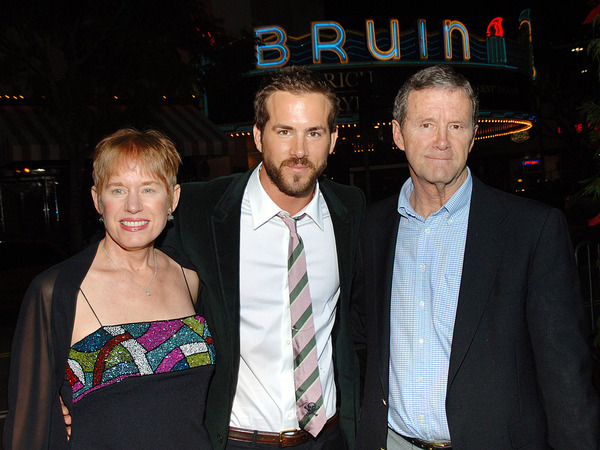 As the actor opened up in his interview to CQ, he used to be really vulnerable in his early years. “I was touched by any emotional event around me!” Later Ryan learnt how to transform his too emotional state of mind and direct that energy into acting. He participated in school plays – and soon he had become a school star. At the age of 12 Ryan Reynolds made up his mind to become a professional actor. He convinced his parents to take him for auditions, and soon the boy won his first role – in the teen series “Hillside”, which was on air not just in his native Canada, but also in USA.

After school Ryan tried to continue his education at Kwantlen College, but soon dropped it out and concentrated on acting. 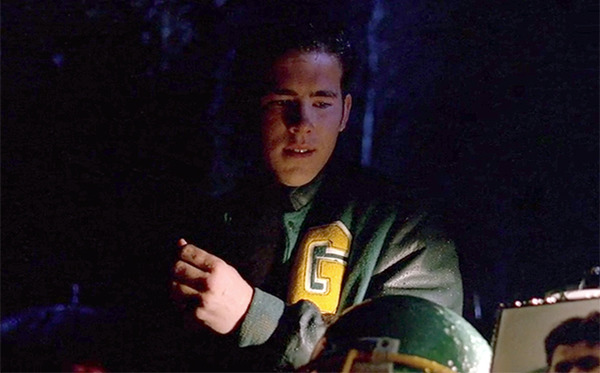 You are not right, if you think that Ryan Reynolds immediately had become a well known star. On the contrary, he struggled a lot on that way. When Reynolds stayed jobless for a long time, he waited tables or worked as a handyman in the yacht-club.

Ryan Reynolds appeared in a number of TV series, such as “The Odyssey”, “The X Files” and “Sabrina the Teenage Witch”, but his roles were tiny and very often he left the series, having appeared in one episode only. But in late 1990s Ryan Reynolds made an important decision, which positively influenced his career. He moved to LA. 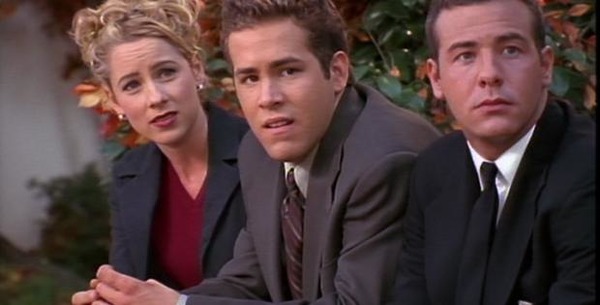 In LA Ryan’s charm, vulnerability and energy turned to be of great demand. He immediately won the lead male role in a sitcom “Two Guys and a Girl”. The simple story of three students, who plan their future career and romantic life and share the thoughts about it in a cozy pizza place, was created by Kenny Schwartz, who took the idea of the series from his real life. The pilot episode of the series was watched by 18 million viewers. Soon “Two Guys and a Girl” has become a massive hit, and it revived careers of three young actors – Traylor Howard, Richard Ruccolo and Ryan Reynolds. The success of the series opened him doors to the big screen world and, finally, he won the role, which turned him into a star. 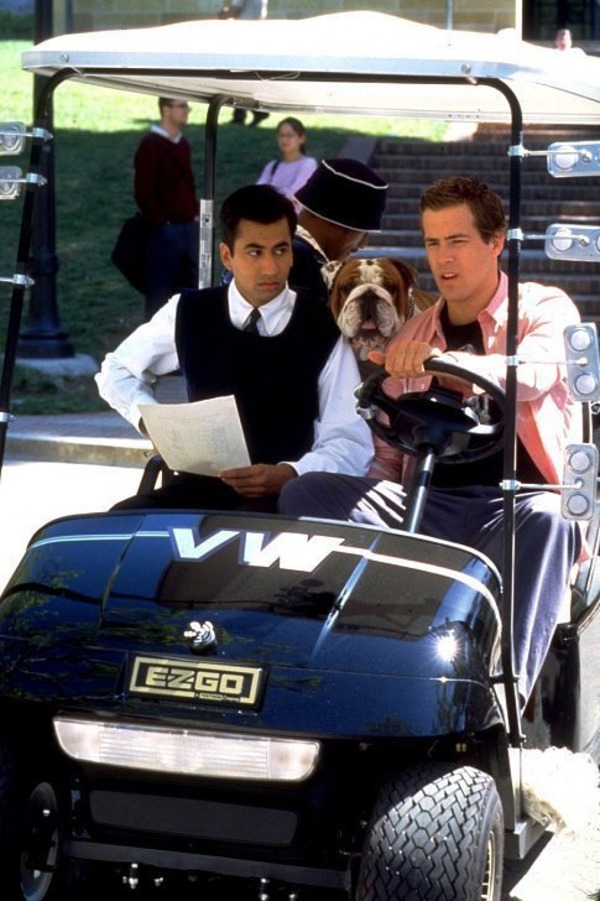 “Van Wilder” is a romantic comedy, directed by Walt Becker and released in 2002. Ryan portrayed a student, who was so fond of careless college life that did everything he could not to finish his education. After 6 years of his son’s studying, his father finally decided not to pay for the next course in college. That put Ryan Reynolds hero in a very uncomfortable situation.

The comedy unexpectedly has become an international hit. After that Ryan got everything each Hollywood A lister can boast with: a multi-zero bank account, a mansion in the suburbs and lots of new roles. 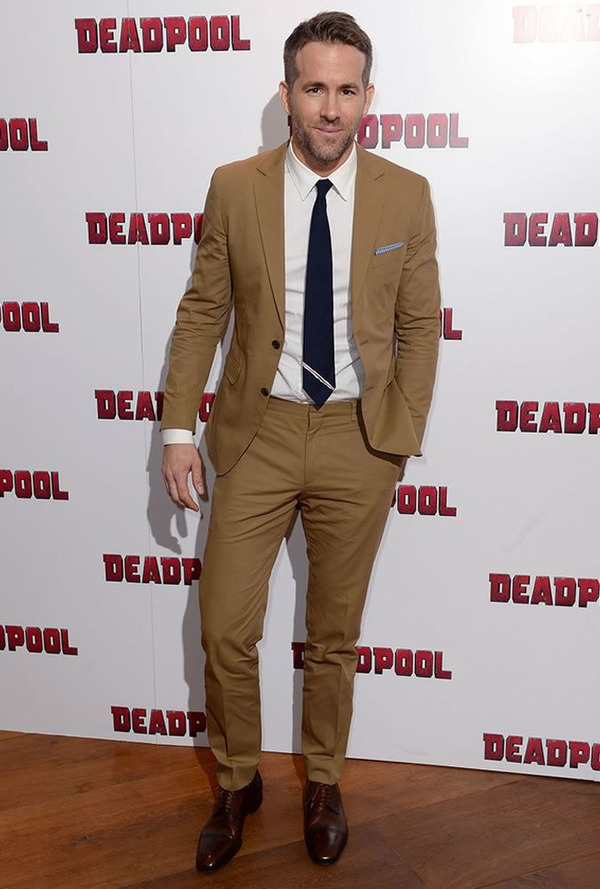 After that the actor appeared in many films of various genres. He acted in “The Amityville Horror”, “Chaos Theory”, “Fireflies in the Garden” and other films. And of course, he didn’t forget about personal life too! 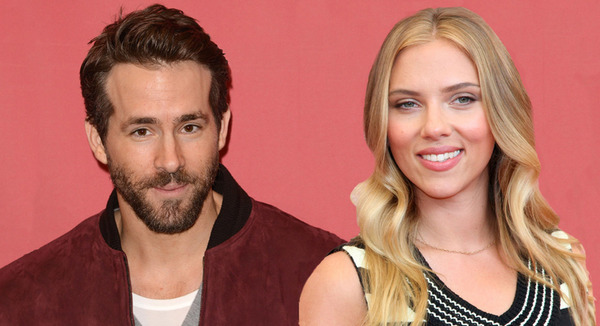 During several years Ryan Reynolds dated an actress and musician Alanis Morissette. They got even engaged, but then separated with the intention to remain friends. In 2007 Ryan met a woman, who changed him. To the moment of their meeting Scarlett Johansson has already become a legend, which was a rare thing for the actress of her age. She starred in a cult “Lost in Translation”, played alongside John Travolta in “A Love Song for Bobby Long” and acted opposite Helen Hunt in “A Good Woman”. For most of Scarlet’s friends, Ryan Reynolds was too simple and too ordinary for her. That’s why most of people in Scarlett Johansson company were shocked, when they heard about the couple wedding. 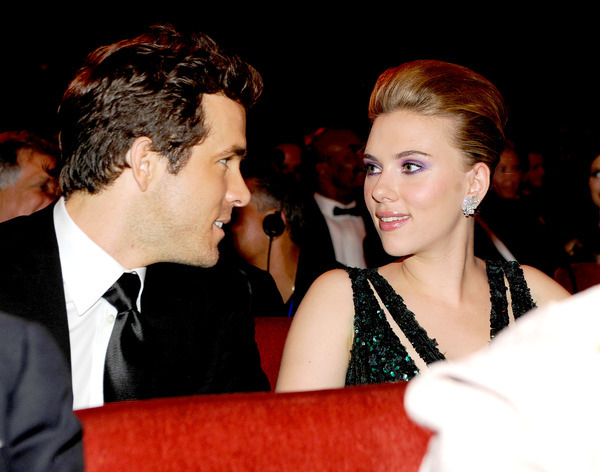 Scarlet and Ryan tied a knot in his native Vancouver. The ceremony was very private, just a few people attended it, and even all-pervasive paparazzi didn’t make the single photo.

“What does Ryan have besides his hot look?” Scarlet friends wondered. “She could easily marry a famous film director or Oscar winning actor!” 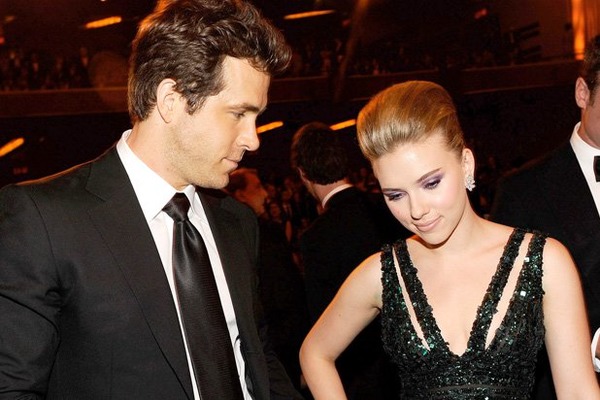 Their marriage lasted for 2 years, and in 2010 the couple separated. Later Scarlett Johansson confessed that the reason of their split was her too critical attitude towards Ryan Reynolds, and their busy careers. Johansson was too focused on her career success, and it annoyed Reynolds. That’s why later he married a woman, who could easily put acting aside and center her attention on the family life. 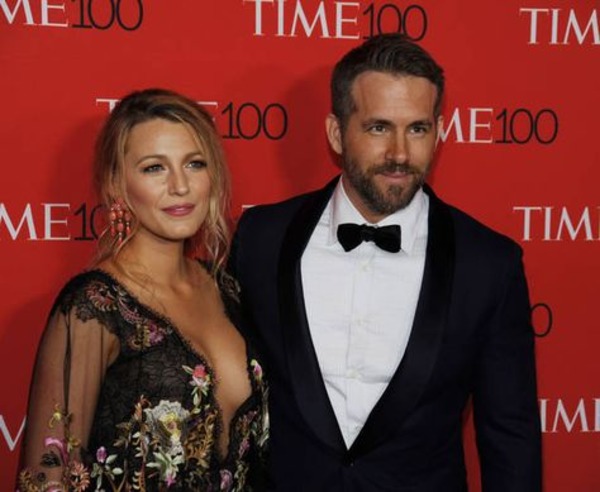 Ryan Reynolds met Blake Lively at the set of “Green Lantern”. Then his marriage with Scarlett Johansson had already been over, nevertheless they didn’t file for divorce yet. Blake was still dating Gossip girl co-star Penn Badgley. Ryan and Blake felt attracted to each other, but they resisted it to remain faithful to their partners. But at the end of 2010 both separated officially and were ready to move forward.

Ryan and Blake started dating in 2011. As we have told you at the very beginning, their passion was so strong, that they had sex on the first date. 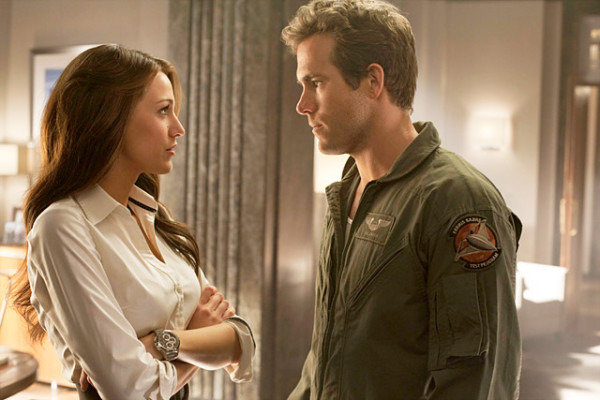 As Blake Lively friends tell, the actress was completely in love with Reynolds. Soon after their meeting she started to look for the mansion in New York subs, where she planned to live with Ryan Reynolds. The actress was caught by paparazzi numerous times, leaving Ryan Reynolds apartment in the early morning. The couple, who tried to hide their relationships from public, finally opened up about their affair. 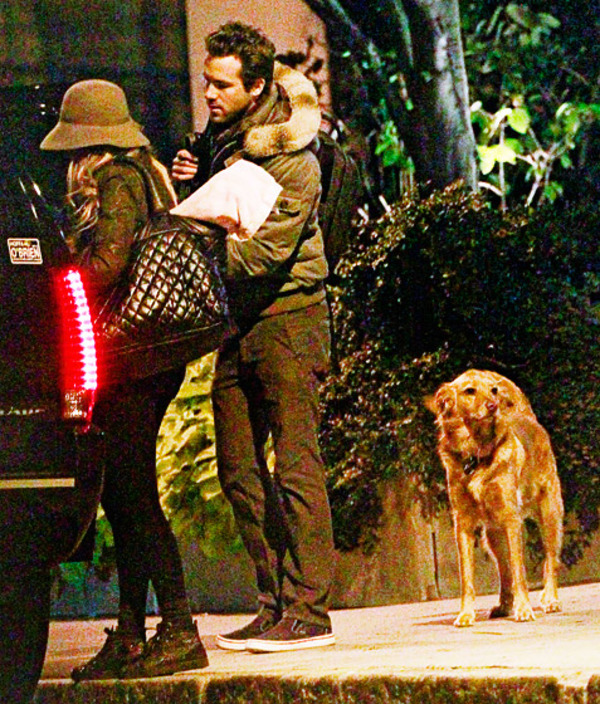 In December, 2011 Ryan Reynolds made a serious step in their relationships. He invited Blake Lively to his parents’ home in Vancouver for winter holidays. He introduced his girlfriend to his family. In September, 2012 Blake and Ryan wedded in Charleston.

The newlyweds went to Paris in December, 2012.”They were kissing all the time”, some witnesses have reported. “They were so focused on one another”. 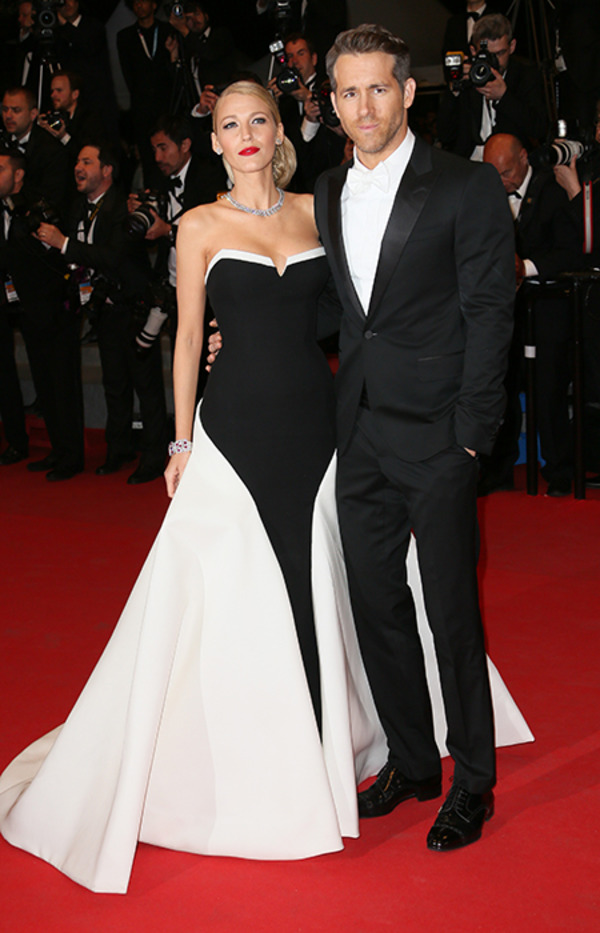 Blake and Ryan spend all their free time together. They shared everything – joys and sorrows. But in December, 2014 they have already started to share everything on 3. The couple welcomed a first kid – a daughter James. Two years later, in September, 2016 they were blessed with the second daughter Ines. 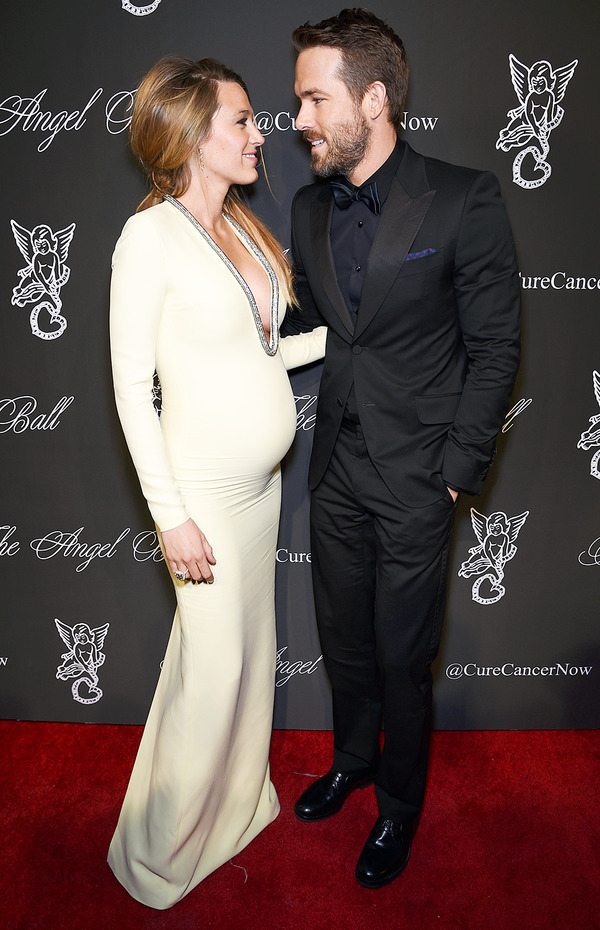 Currently Ryan Reynolds is absolutely busy with acting and producing new projects. He is planning to release the second part of the massive hit “Deadpool”. Blake Lively is a rare guest on the screen now. She is focused on her daughters. But not long ago the actress starred in “The Shallows”. 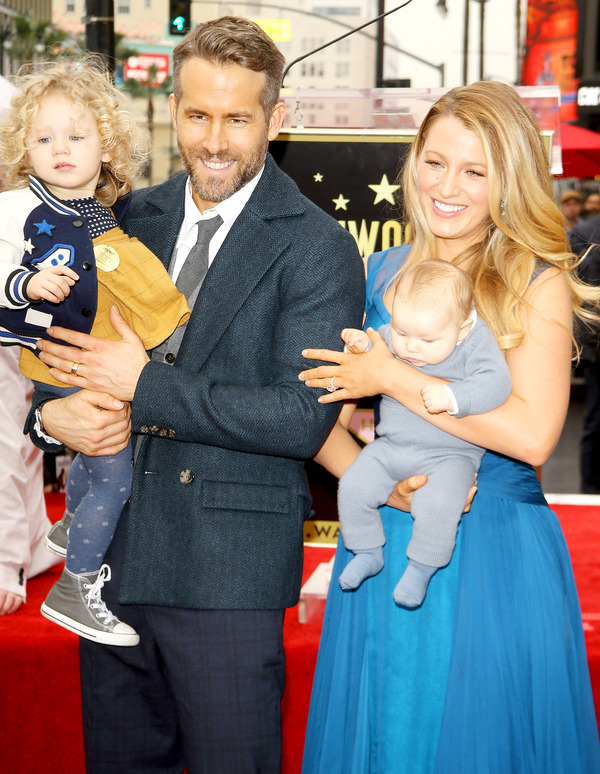