Home > Top Hottest Expenses > Uncensored Love of Crystal Hefner. How Much Will the Widow Inherit from Hef?

Uncensored Love of Crystal Hefner. How Much Will the Widow Inherit from Hef? 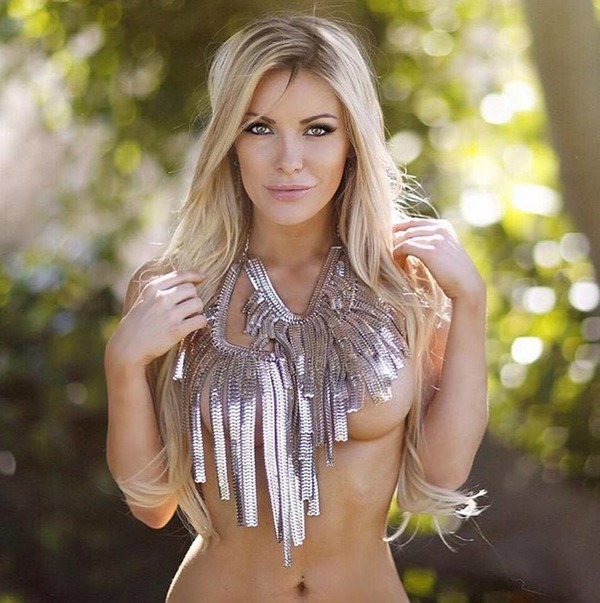 The sixty-year age difference looks wild from the outside, but when you love – you do not think. Was it really love, which pushed 26-year-old beauty Crystal Harris into the arms of an obscenely rich Playboy in his golden age? Nobody believed in the feelings of a bright blonde beauty to a media mogul Hugh Hefner. Even Crystal fans considered their marriage as the shortest way of a young beautiful model to multi-million wealth. Crystal, whose personal assets consisted just of her huge eyes and perfect smile, married a multi-millionaire Hugh Heffner in 2012. 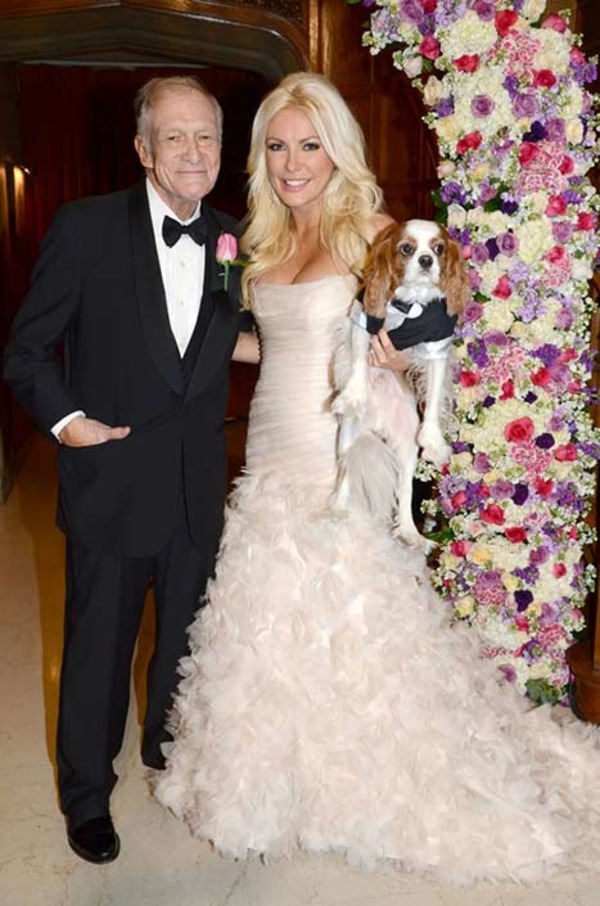 Then Hugh turned 86, and it was obvious, the end of his life was close. Hefner’s net worth was approximately $50 million that time.  But was it Crystal’s plan to inherit Hugh Hefner’s Empire? And what does she have now, after Hefner’s death?  Let’s have a look!

Hugh Hefner’s Will – Who Will Inherit The Empire?

Hugh Hefner’s body hadn’t got cold yet, when the representatives of yellow press began guessing, who would inherit media icon’s Empire. A decade ago another Playboy star Anna Nicole Smith started a battle for millions of her late too old husband and continued it till her death. But Crystal turned to be much wiser – she refused from Hefner’s money five years ago, when she signed the prenup. 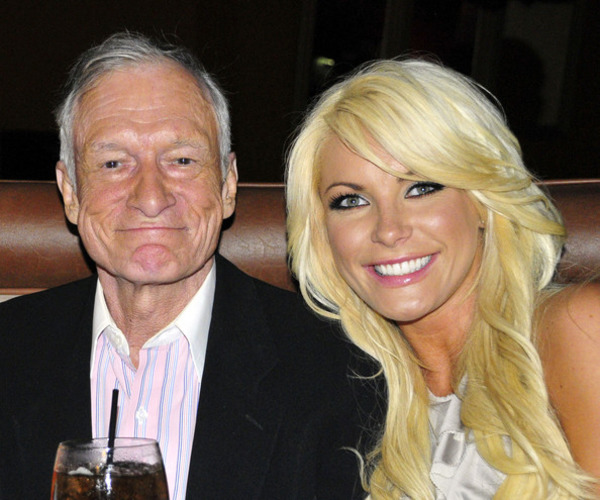 By the way, Crystal was perfect in the role of Hefner’s trophy wife. During 5 years of their marriage she was supportive, loving and faithful. Mrs. Hefner hadn’t participated in any scandal – and she was followed by paparazzi all the time. The lovers of hot news were waiting for Crystal’s mistake – and got nothing. She had never looked at another man during her years with Hugh. 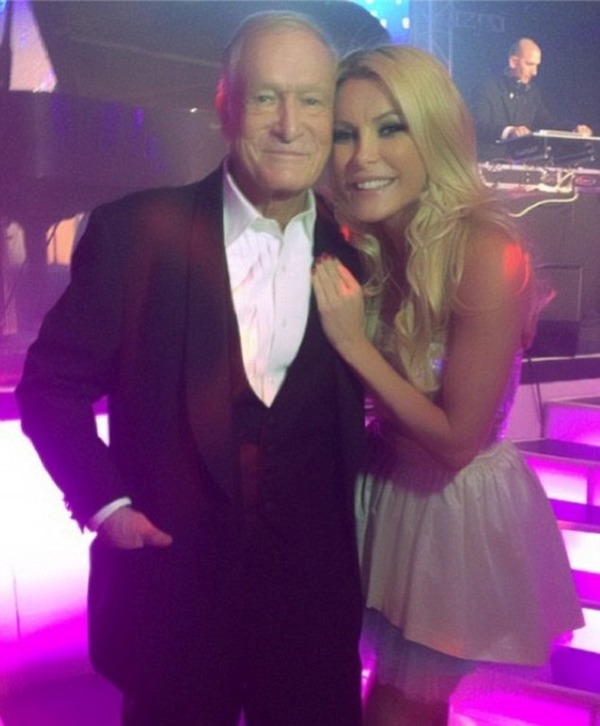 It was Crystal, who was taking Hefner by hand in his last hour. After his death a small-time widow gave her interview to People magazine. Crystal’s words about late Hefner were full of love and sorrow. She told, that her husband was “the kindest” person on earth.

That “kindest” person left $50 million wealth. He passed away on the 27th of September in 2017 after a long battle with Septicemia. The dangerous infection caused cardiac arrest, which actually ended 91-year way of a famous Lovelace. 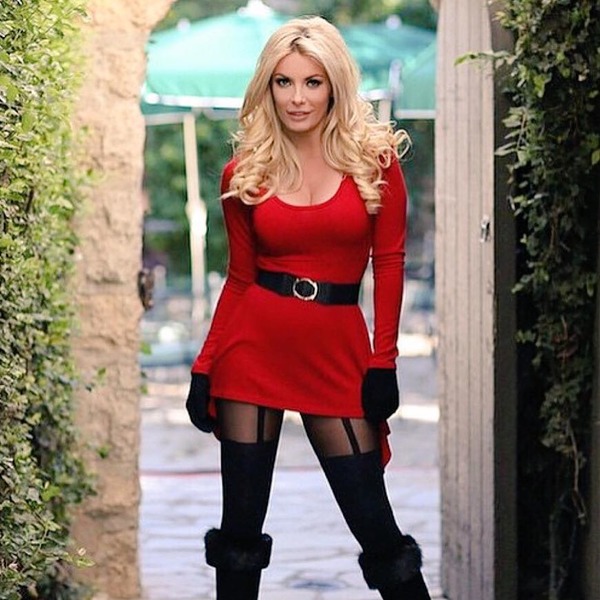 According to Hefner’s will, the sizeable inheritance will come to his four children. He had two children from his first marriage – a daughter Christie Hefner and a son David Hefner. In addition, he had two sons – Cooper and Marsten – from his marriage to Kimberly Conrad, ex-Playboy Playmate.

Some part of Hefner’s wealth will come for charity – probably, Hugh still plans to have the right place in paradise. He left some part of his millions to the film school at the University of Southern California and to some charitable organizations.

As for Hefner’s famous mansion, currently 33-year-old Daren Metropulos lives there. The son of a billionaire, Daren bought the mansion a year ago for $100 million. But Metropulos made a deal with the media magnate – Hugh had the right to live there till his death. Now Daren announced, he is going to make a museum from Hefner’s home.

As for Hugh’s legendary magazine – “Playboy” was sold to Rizvi Traverse company. So, Hefner wasn’t Playboy’s owner at the moment of his departure. 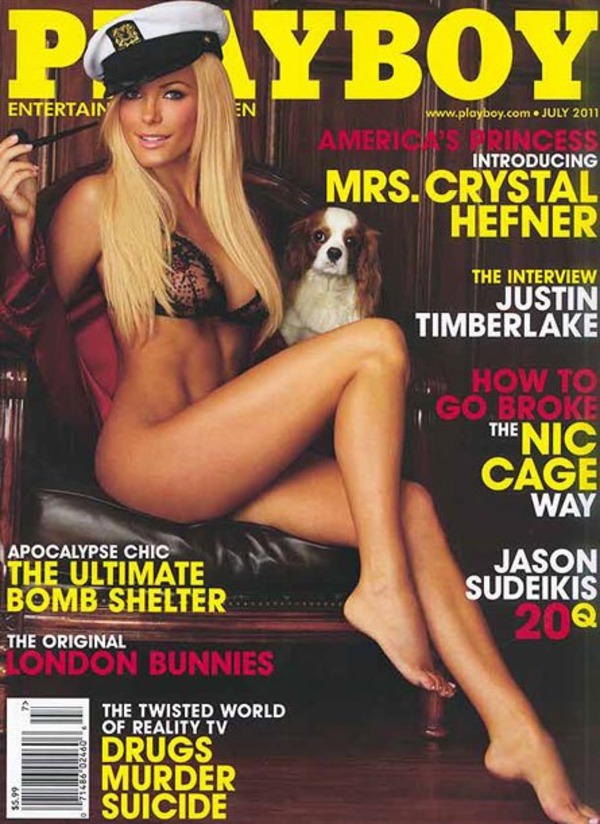 So, what is about Crystal? Has she really ended up her 5-year marriage with nothing?

Uncensored Love of Crystal – Was It Really so Pure? 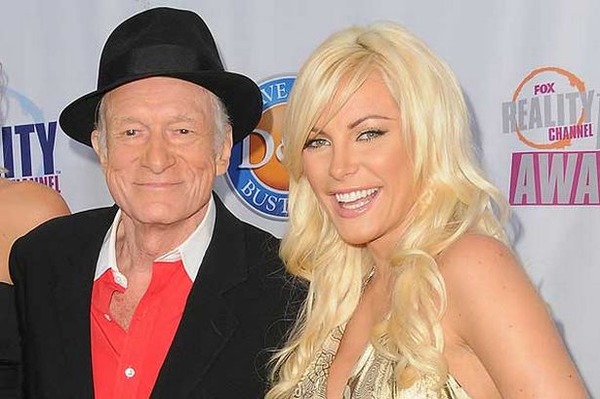 If you are a skeptic, it is the time to believe in love. The beauty Crystal Hefner refused from her husband’s money, having signed the prenup. According to the document, Crystal abstained from Hefner’s money and agreed that he had to leave his wealth to his children.

But as it usually happens, Mrs. Hefner still had some profit from her marriage to a multi-millionaire.

She got $5 million – the amount, which an appreciative husband decided to give his beautiful wife – and a huge mansion. Hefner bought the mansion as the wedding gift to Crystal in 2013. 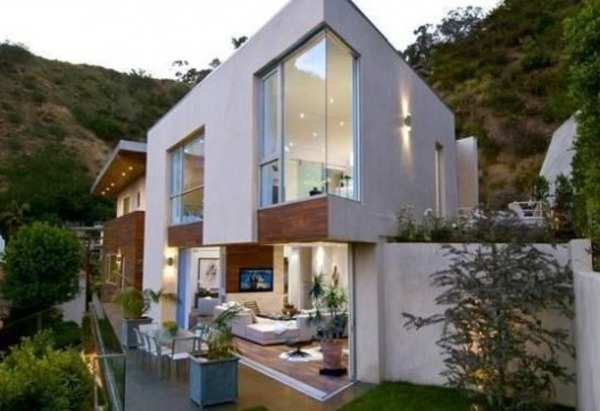 Currently the widow deals with grief in a big roomy house in Hollywood Hills. Of course, this home can’t be compared to a lavish Playboy mansion, where Hef arranged his wild parties. Still it is a luxurious building, which consists of 5 bathrooms, several bedrooms and an enormous swimming pool. There’s also a well-equipped kitchen, a theater room and a poker room – with a table to play gamble games. 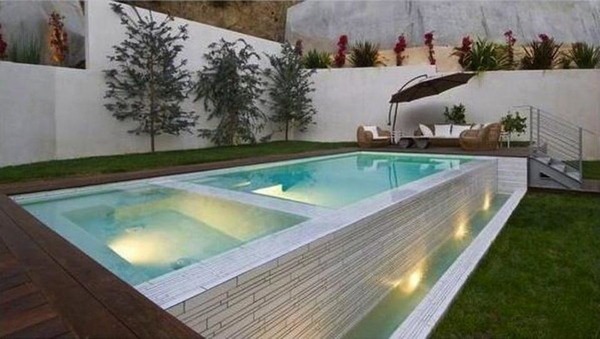 The house, which Crystal inherited from her late husband, is estimated at $7 million approximately. So, Mrs. Hefner’s uncensored love still brought her some income. 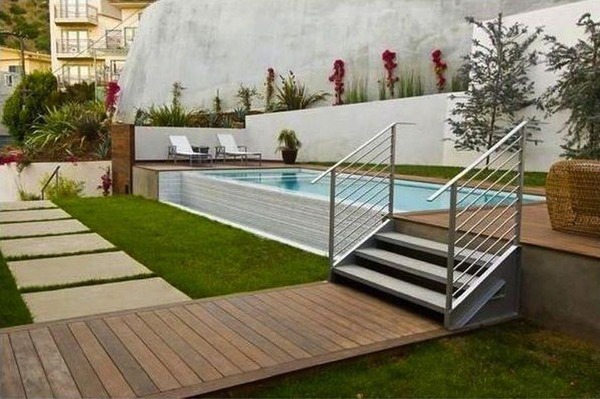 Crystal sounded so sincere, when she talked about Hef in her interview with “People”. She called her late husband “an American hero” and “Pioneer”. To understand her love to Hugh better, it is necessary to remind their story.

From Harris to Hefner. Crystal’s Life and Love Story

Future Mrs. Hefner was born on the 29th of April, 1986. She grew up in a family of two unpopular entertainers, Ray Harris and Lee Lovitt. Crystal Harris spent some part of her childhood in England, where her parents and two sisters moved, looking for the better fortune. Nevertheless soon they returned to USA and settled in San Diego, California.

Crystal’s father earned his living as a singer, and it inspired Crystal to start career in show business too. She joined modeling with study at San Diego State University. Harris majored in psychology, but her study was overshadowed by career of a glamour model. 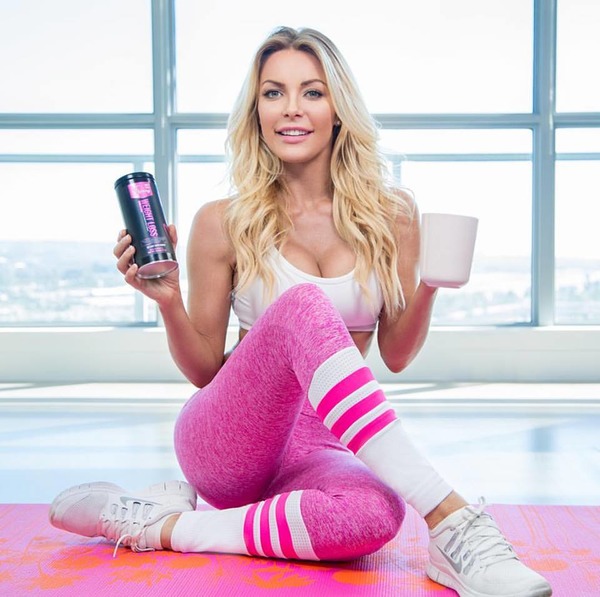 The beautiful young woman, Crystal Harris caught attention of Playboy organization. She started to model for the issue and had become the Playmate of the month in December, 2009. That very time she started dating with Hefner. They say, Miss Harris passed through a number of plastic surgeries to gain her hot look. Really, her young photo has some distinctions. 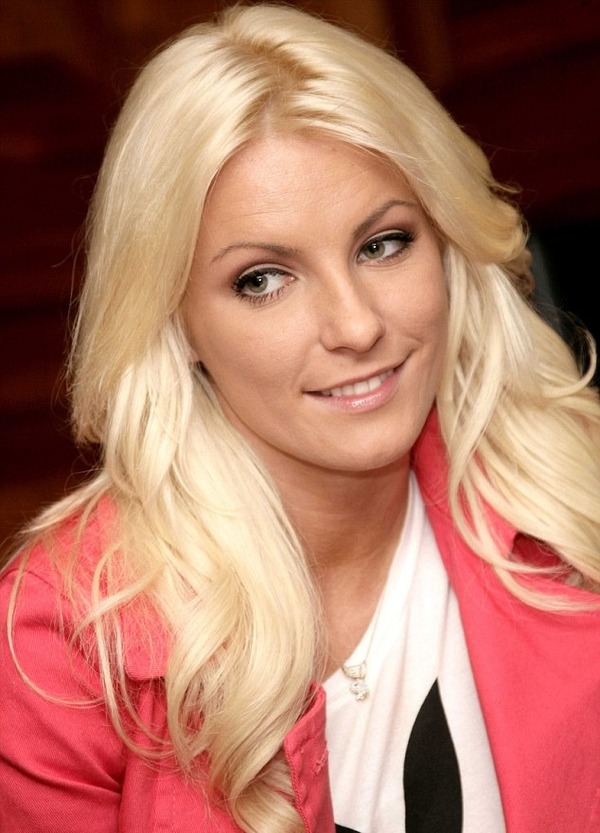 Crystal later told, that meeting with Hef was especially important for her. “I had never met a celebrity before”, she used to tell in her interview. In December, 2010 Hugh proposed her. Later the business magnate tweeted about it. “I gave Crystal the ring, and she boasted into tears”, he wrote.

As for Crystal, she told, that the proposal made her feel secure. Hef was surrounded by girls all the time, and Crystal was afraid to be replaced. 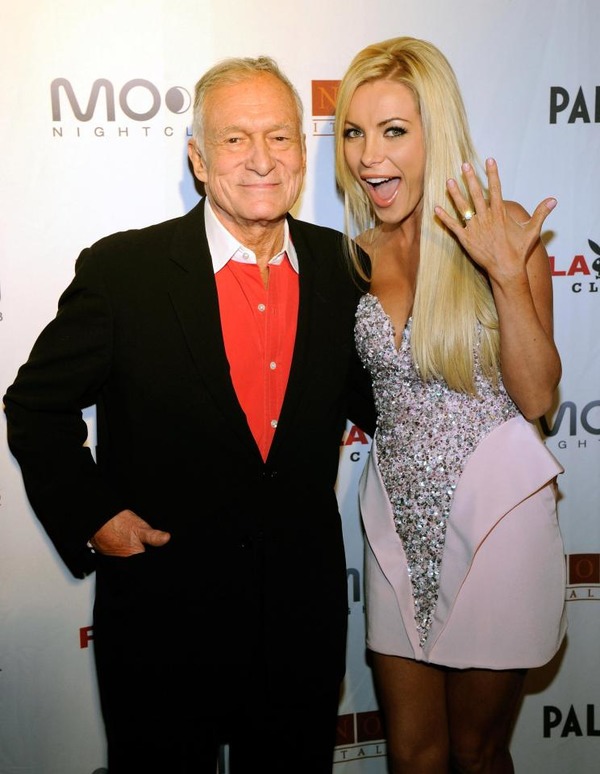 Their wedding was planned for June, 2011. Five days before the ceremony Crystal broke up her relationship with Hugh and gave an interview, where she criticized sexual abilities of her fiancé. She refused from her words, when they reconciled and finally got married on the last day of 2012.

Hugh Hefner was a well-known lover of blond girls. He died, taking by hand the beauty blonde Crystal and was buried near another famous blonde – Marilyn Monroe. 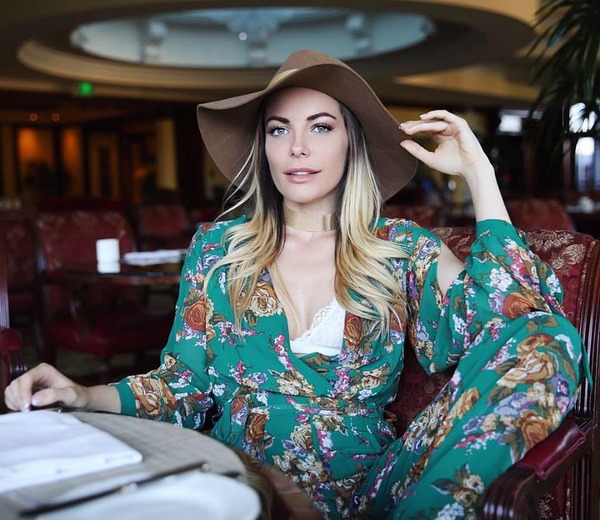 It is not known, if Hugh Hefner fulfilled any of Crystal dreams, but she, surely, fulfilled one of his. He dreamed to die near his beautiful young wife, saying a silent “good-bye” to his long bright life. “I was blessed with Playboy”, he said in his last interview.