You will earn $15 million in

How Much is DJ Paul Worth?

DJ Paul is recognized as Three 6 Mafia member. The famous DJ, rapper and songwriter, he earned the major part of his wealth through these activities.

DJ Paul formed the band “Three 6 Mafia” in early 1990s. Then the group consisted of 3 members – DJ Paul himself, his half-brother Ricky Dunigan (who died in 2013 from a heart attack) and Jordan Houston. Later the cast of the band was changed.

The rappers from Memphis, Tennessee started from scratch and managed to become super stars in their area. They released the album “When the Smoke Clears: Sixty 6, Sixty 1”, which gained platinum status. As a result, all the band members, including DJ Paul, earned a great salary.

DJ Paul develops lots of solo projects too, which have positive impact on his net worth. He has released 6 solo studio albums, the first of which, named “Underground Volume 16: For Da Summa”, was certified as gold.

Although DJ Paul is really successful as a musician, that activity is not the only one source of his wealth. He participated in a number of TV projects, including participation in a reality TV show “Adventures in Hollyhood”, which aired on MTV. In the show Paul and other Three 6 Mafia members demonstrated, how they were moving to Hollywood and were getting used there.

In 2006 DJ Paul earned the most important award in his life, which put his self-esteem and earnings to the new level. He won an Oscar for his song “It’s Hard out Here for a Pimp”, which was used as the soundtrack to the movie “Hustle & Flow”.

Alongside career in entertainment industry, DJ Paul turned to be a successful entrepreneur. He has his own production company, develops a fashion line and sells BBQ spices. These business ventures are quite successful and bring DJ Paul some extra profit.

So, the entertainer and businessman, DJ Paul enjoys his $15 million net worth. But how did he start his career?

Born Paul Duane Beauregard spent his early years in Memphis, Tennessee. His parents separated, and Paul’s father re-married. Thus, the musician has always told, that he has two families – the main family (his mother’s) and the second family (his father’s). DJ Paul has several siblings, including late Ricky T Dunigan, officially known as Lord Infamous.

He has always dreamed about career of a musician. Paul started to earn his living as a DJ. He performed in the clubs, where he met another music enthusiast Jordan Houston, officially known as Juicy J. Together they formed a band “Three 6 Mafia”, which initially consisted of three members – them two and Ricky T Dunigan.

In 2013 DJ Paul returned to djing. He performs as a part of a duo “S. I. M.” The star works 20 hours per day, developing his business interests and recording music. He is not married. DJ Paul was engaged to Majda Baltic, but they have already separated. Currently he is rumored to date Perla Hudson.

The owner of multi-million net worth, DJ Paul has several residences. He spends most part of his time in the house, which is situated in Collierville, Tennessee. But the famous musician also has a property in Los Angeles, California. The famous DJ and rapper has lots of work to do in LA, that’s why he bought a residence there.

DJ Paul house consists of 2 storeys. It is a spacious villa, which is built of white brick and covered with red tiles. There are lots of windows in the house, which enables easy access of sun rays to the premises. The windows are of rectangular and oval shape. The entrance door of the house is decorated with an arc.

The detached garage is roomy and comfortable. DJ Paul keeps his car there! 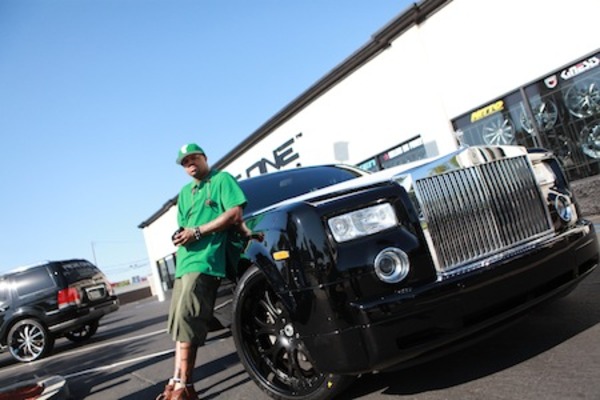 DJ Paul drives black Rolls Royce. The first-class British car is the favorite choice for many celebs. It costs between $300, 000 – $400, 000. The popular musician is often seen behind the wheel of his car. In addition, he owns a massive Phantom. This vehicle is on photo above – with its great owner, of course!