Home > Celebrity Family > Kids > Reese Witherspoon Kids: She Likes to Be A Mother!

Reese Witherspoon Kids: She Likes to Be A Mother! 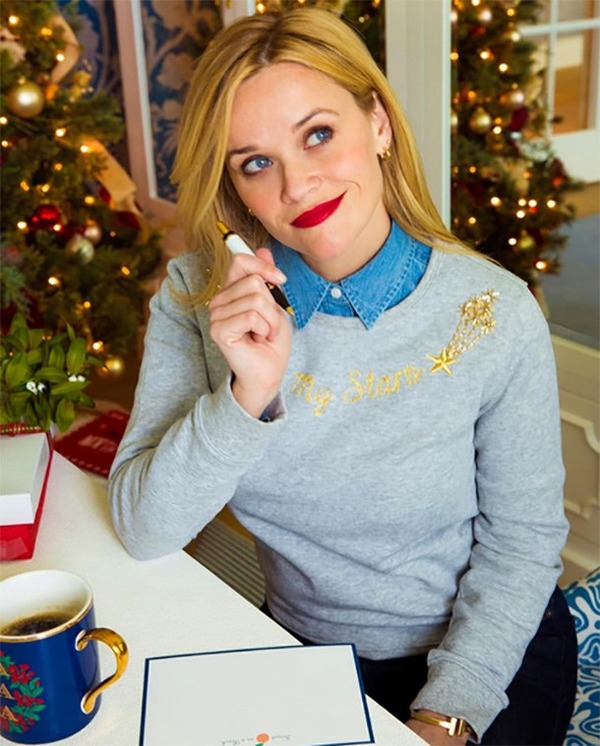 The actress Reese Witherspoon has special attitude towards motherhood. “I had low self-esteem and was not self-confident, but everything had changed, when I had become a mother”, shared the actress with her fans. In fact, Reese has become a mother at a very early age (especially for Hollywood) – at 23. Now she has three kids from two marriages: a daughter Ava Elizabeth Phillippe, a son Deacon Phillippe and a son Tennessee James. Here are some facts about them. 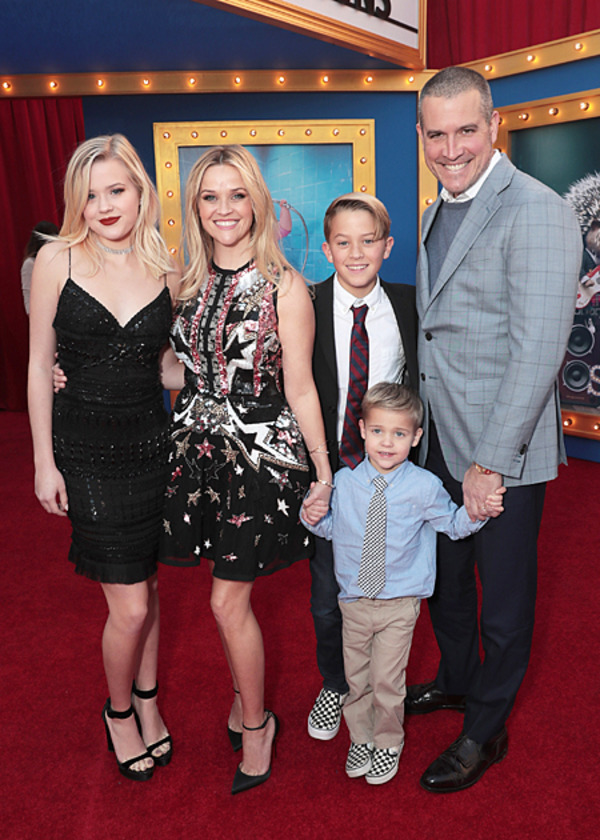 Ava Elizabeth Phillippe is a daughter from Reese Witherspoon first marriage. Her father is a popular actor Ryan Philippe. Her parents met at Reese’s 21 birthday party. Then Reese told to Ryan, “You are, probably, my birthday gift”. The couple started dating and married on the 5th of June in 1999. 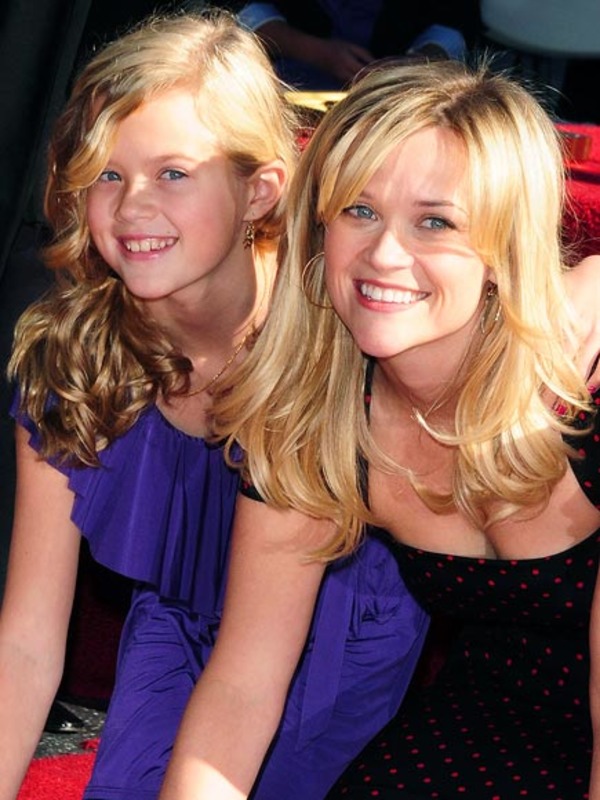 They welcomed their first daughter Ava Elizabeth three months later on the 9th of September, 1999. The baby was not planned, Reese got pregnant with Ava while filming “Cruel Intentions” (she and Ryan both acted there).

When Reese saw two stripes on her pregnancy test, she was shocked. “I hadn’t been taking a newborn in my arms before”, she told. But Ryan supported his young wife. He learnt everything – how to change diapers, how to warm baby formula and how to get the kid down. 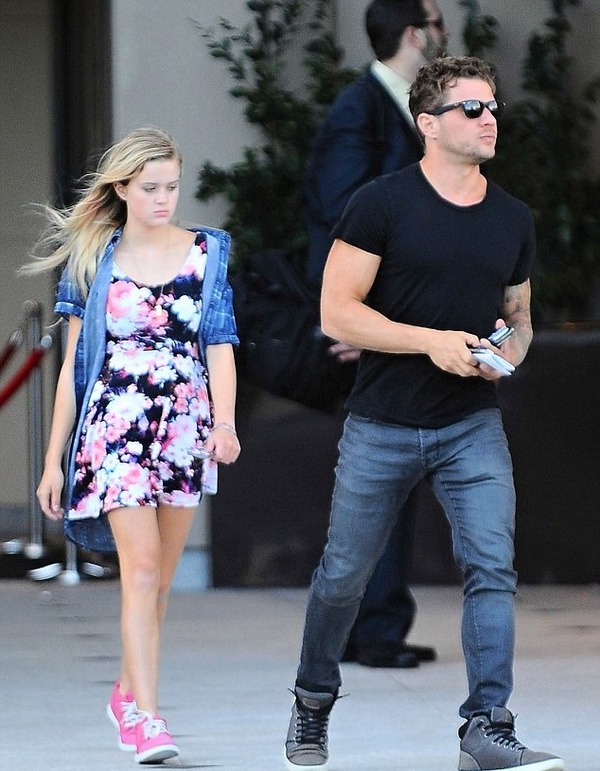 When Reese was on the last months of her pregnancy, Ryan Phillippe should have left for acting in the movie “The Way of the Gun”. But when Reese phoned him and told that the baby was on the way, he immediately left the film set and came to LA to see his baby girl.

In fact, Reese Witherspoon was very proud to become a parent. At the same time she felt, that it was very hard to combine her motherhood with a successful Hollywood career. Once Ava caught a cold, and Reese had to spend most part of the night near her, and then she went to the film set without sleeping at all. Then Witherspoon was filming “Election” and acted opposite Matthew Broderick.  Her heroine, the school pupil Tracy, had to be vivid and smiling all the time. “I wouldn’t make it!” Reese Witherspoon repeated to herself each morning. Even now the actress tells that Ryan Phillippe support was precious for her. 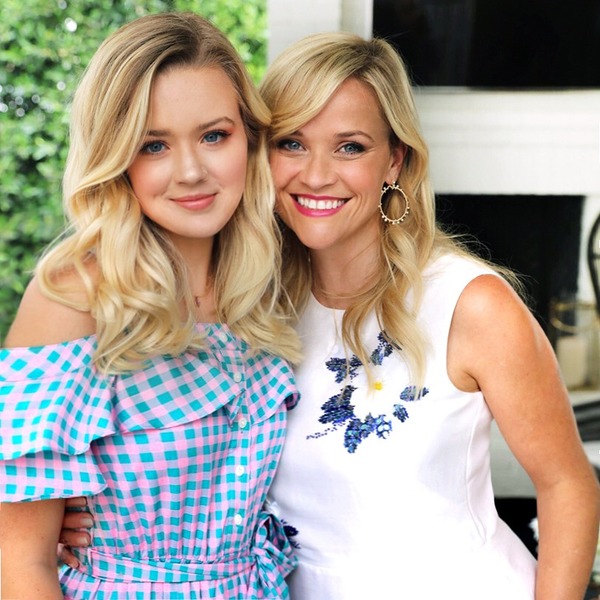 Ava Elizabeth Phillippe soon got older and entered Los Angeles primary school. She joined her studying with small acting gigs (for example, the girl participated in the series “Entertainment Tonight”), but acting bug didn’t bite her.

From year to year Ava looked more and more like her mother. Paparazzi liked to catch Ava with her mother, while shopping or having lunch together. They were absolutely the same.

Although Ryan Phillippe and Reese Witherspoon separated, Ava regularly sees her father too. By the way, it was Ryan, who chose such a name for his daughter. He took it from a famous actress Ava Gardner. 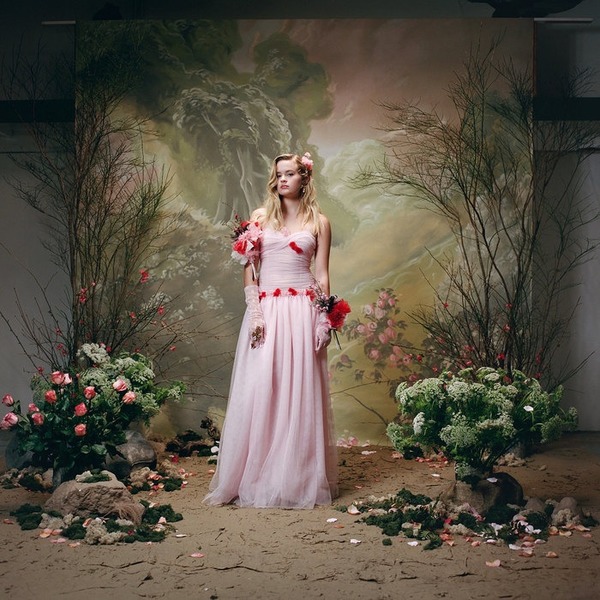 At the age of 15 Ava decided to become financially independent from her parents. During her summer holidays she worked as a waitress in the pizzeria not far from her house. Now the young beauty is making her first steps as a model.

Ava turned 18 last summer. She was going to become a college student and was considering three Universities: University of Washington, Berkeley and San Diego College. 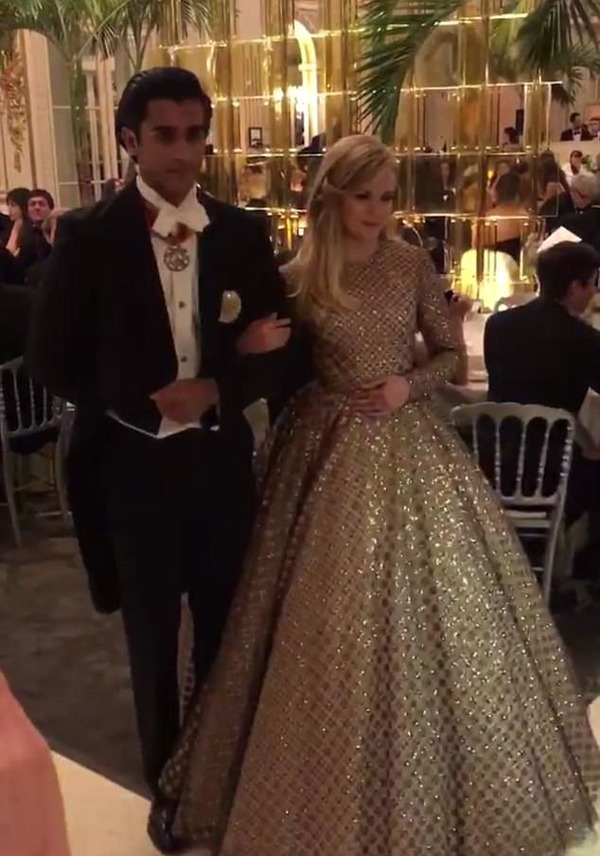 In autumn, 2017 Reese danced at the ball of debutants in Paris. She looked like a princess in a golden fluffy dress, which resembled the dress of Scarlett O’Hara in “Gone with the Wind”. The young beauty was supported by her mother. She danced with Maharaja of Jaipur Padmanabh Singh, the member of the royal family. Reese Witherspoon was present there too and surely, was proud of her daughter, as well as of her other kids! 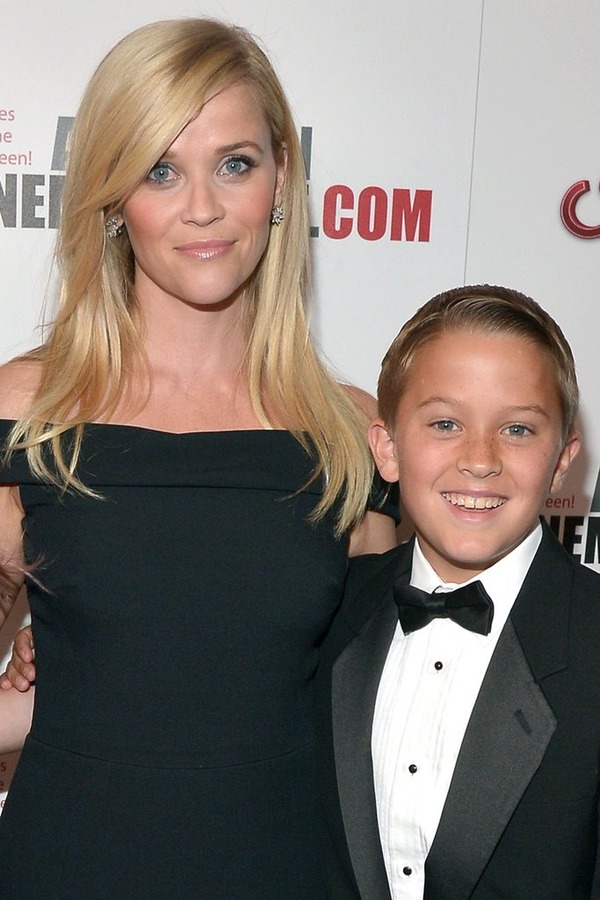 Deacon Reese Phillippe was born on the 23rd of October, 2003. He is a son of the actress Reese Witherspoon and her ex-husband the actor Ryan Philippe. Reese didn’t plan that pregnancy, that’s why it was a surprise for her, when she learnt, that she is going to become a mother for the second time. In 2002 Reese was busy with a role in the movie “Vanity Fair”, based on William Makepeace Thackeray book. She played the lead heroine Becky Sharp.

At first the news of Witherspoon pregnancy shocked the film director Mira Nair. But Reese heroine was going to become a mother too, so the signs of Reese preg were on time! Mira even told later, that she had jokingly recommended Ryan Phillipe to make his wife pregnant to look natural on the screen, when they were discussing the future film. And Ryan followed her advice! 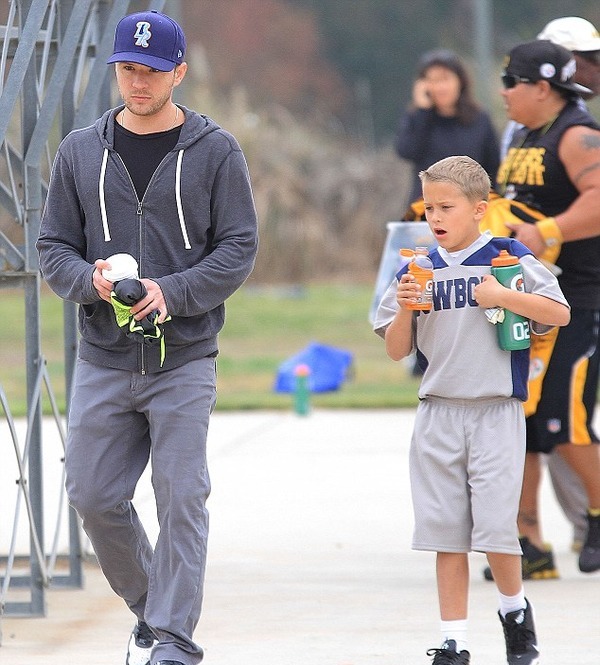 When small Deacon was born, not just Reese and her then-husband Ryan were happy, but also small Ava, who was looking forward to becoming a sister.

Currently Deacon is 14. He resides in LA in a luxurious mansion, which he shares with his mother and stepfather. The boy is a pupil of a secondary school in LA. 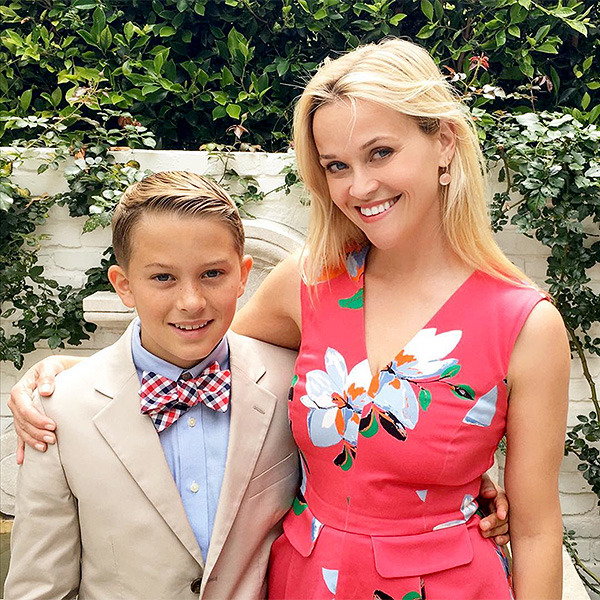 Not long ago Deacon celebrated his birthday. He received congratulations not just from his mom Reese Witherspoon, but also from his father Ryan Phillipe. In spite of the fact that his parents divorced in 2007, Deacon stays in touch with his father.

After separation with Ryan Phillippe, Reese Witherspoon started a long-term affair with the actor Jake Gyllenhaal. But they split after 2 years of love. No wonder that a beauty Reese didn’t wait for long – she found another boyfriend that very year she left Jake. 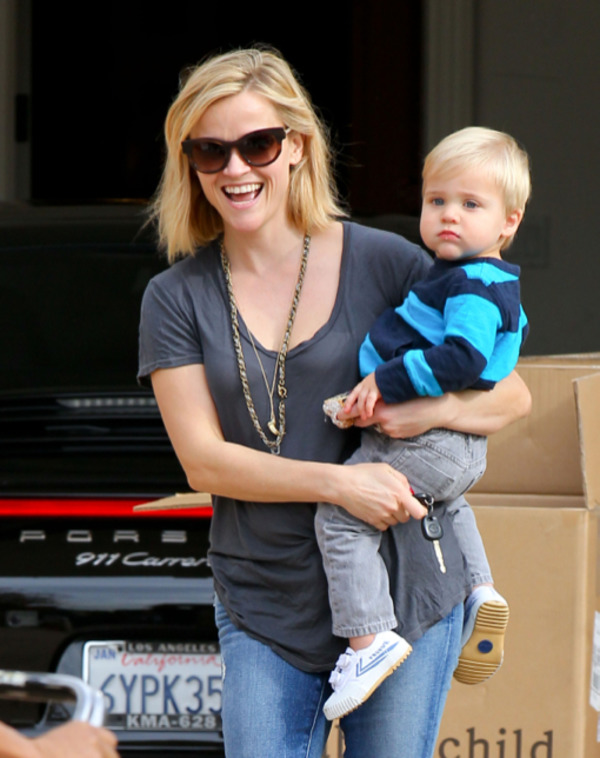 Witherspoon started dating her agent Jim Toth. At first the friends of the actress didn’t take her new love interest too serious. The award-winning actress, who had a very busy schedule, could date a rich businessman or a reputable film director. That’s why her love affair with an agent couldn’t have lasted for long. But Reese and Jim looked happy together. In March, 2011 they tied a knot and after that Reese appeared in public with a neat round belly. She speculated for a long time with her preg rumors and finally confirmed that she was going to become a mother for the third time. 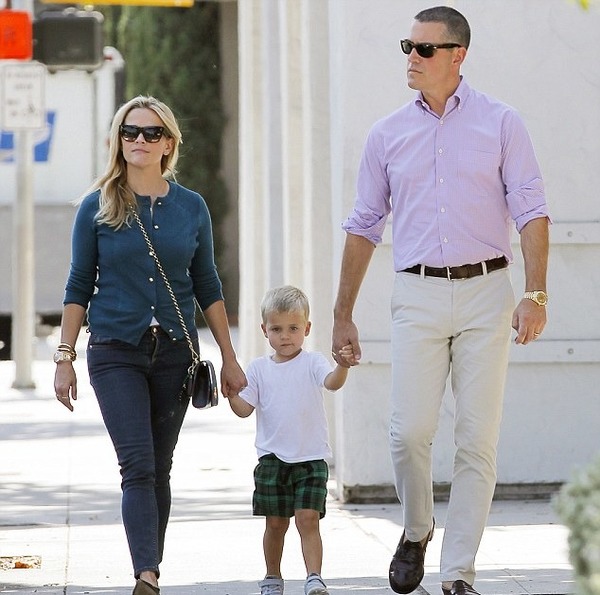 Tennessee James Toth was born on the 27th of September, 2012. He is 5 years old now, and he is preparing to become a primary school pupil. Like his siblings, Tennessee looks exactly like his mother. He has big blue eyes and blonde hair. The boy likes to spend time with his father Jim. By the way, he is the only child for Jim Toth. 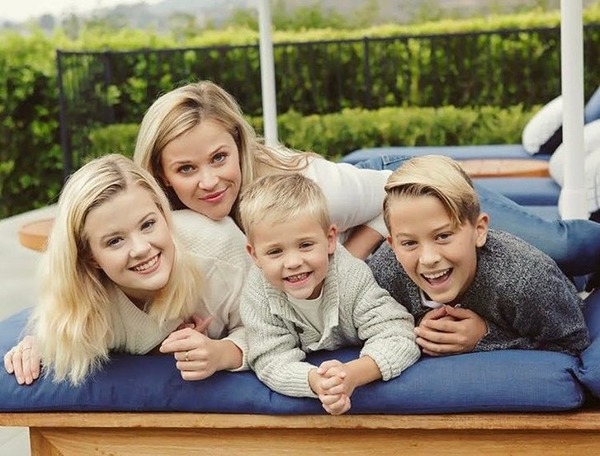 Reese Withersoon is a woman, who achieved a lot in her life – all that fame and money. But most of all she likes to be a mother!