Ronaldinho Net Worth is $90 Million 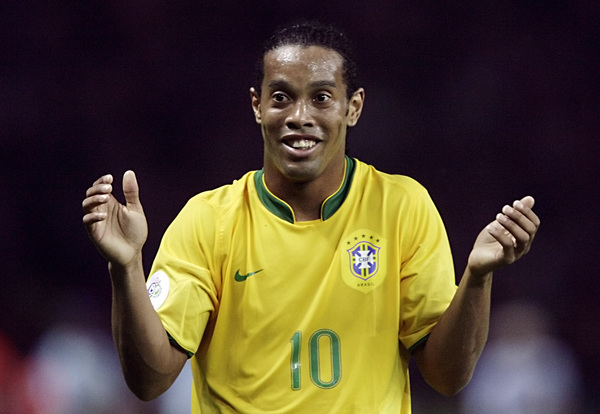 Ronaldinho is the name, which sounds familiar to both, fans and non-fans of soccer. He gained international popularity as a gifted Brazilian soccer player, receiver of Golden Ball award in 2005 and winner of the Champions League 2005/2006. FIFA ranked him as the best world player two times in a row – in 2004 and 2005. Ronaldinho’s salary increased with each new title. Now his net worth is estimated as $90 million.

The famous soccer player is 36 now, and he plans to retire soon. It is not known exactly, what a celebrity is going to do after living sports, but he has already tried his hand as a singer, actor and official Barcelona ambassador (he was appointed for that post in 2016).

Ronaldo de Assis Moreira was born in a family of a shipyard worker (father) and a nurse (mother). His early years the future millionaire spent in poverty. He got interested in soccer due to his elder brother, Roberto. It was his brother, who brought the boy to Grêmio FC, where his career actually started.

The athlete was nicknamed Ronaldinho as he was the youngest member of the club. Very soon the young goal scorer proved that he had unique talent to soccer playing. He was marked as a rising star in press in 1997, when he scored two goals on two penalties during FIFA U-17 World Championship.

Ronaldinho changed a lot of football clubs during the years of his career. The major part of his wealth he made while playing for Barcelona. His transfer to this team cost €30 million. Now Ronaldinho plays for Queretaro.

The famous soccer player knows that one day he should leave sports. That’s why he develops other sources of income. The stellar athlete endorses various brands like Nike, Pepsi, Danone and others. He appeared in several movies as an actor too. For example, in 2016 he had a small role in “Kickboxer Retaliation”, an upcoming movie starring Jean-Claude Van Damme.