Home > Top Hottest Expenses > Top 10 Most Expensive Star Dresses In the World: Get Ready to Enjoy!

Top 10 Most Expensive Star Dresses In the World: Get Ready to Enjoy!

Rustling and flying, lush and tight, short and long – have you already understood what we are talking about? Dresses occupy an important place in the life of every woman – after all, they accompany her at the most important events of her life. For sure, any woman remembers the dress, in which she passed her first exam; dress, in which she went for a date with the love of her whole life; and also a dress in which she sparkled at the graduation party. Famous women have tender attitude to this so girly item of clothing. And they never hesitate to spend hundreds or thousands (and sometimes millions) of dollars for the dresses of their dreams. Here are the 10 most expensive dresses that decorated the bodies of the most beautiful women of the epoch. Get ready to enjoy! 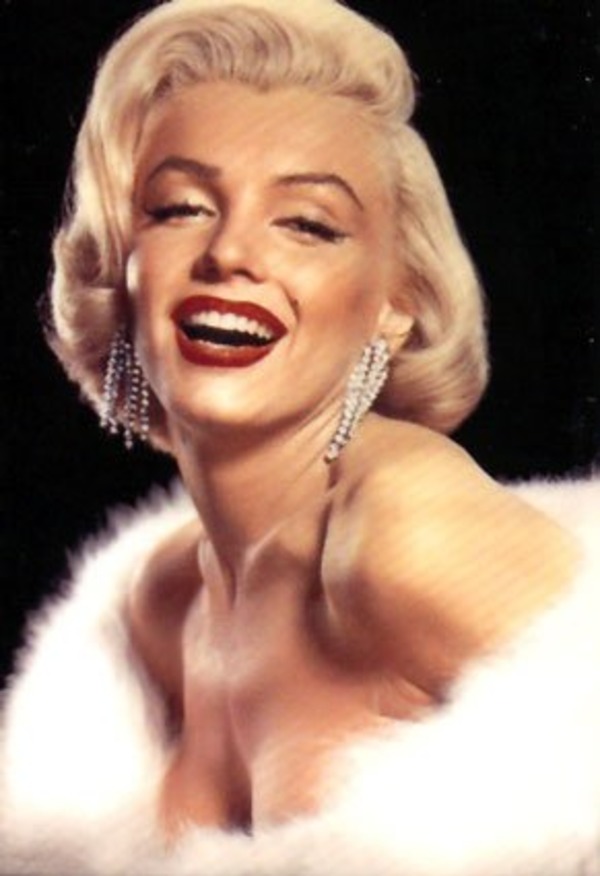 The most famous blonde in the world, Marilyn Monroe had her own magic. She passed away in 1962, and till now there’s no other woman, whose style is copied so frequently. She had an ordinary appearance – and even in her time there were more elegant and more beautiful women. But her sexual magnetism, ideal blonde locks and bright lipstick made people crazy all over the world.

No need to say, that Marilyn Monroe wardrobe was copied all over the world. And one of her dresses was sold at the auction for astonishing $4, 6 million. Of course, the initial price of the clothing was lower, but the dress was valued much higher after the spectacular scene in the romantic comedy “The Seven Year Itch” (1954), where an actress portrayed a beautiful young model.

Till now the scene from the movie, where Marilyn stays above a subway and her dress blows up, is considered as the most popular in the 20th century. 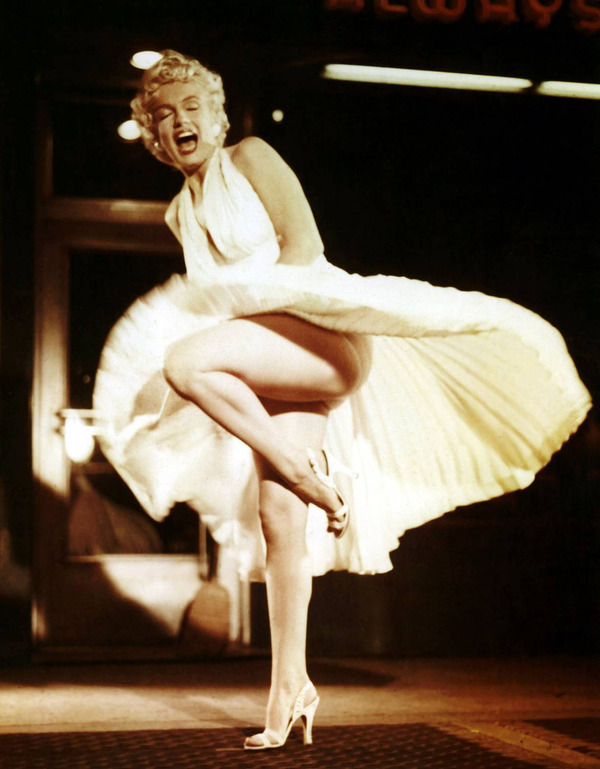 By the way, the ivory pleated dress has quite typical for 1950-s design. It is made of pleated fabric and consists of a pleated skirt, which reached the middle part of the calf, and small bodice, made of two parts of fabric, which joined behind the neck. The multi-million dress was designed by William Travilla, which was rumored to be in love with Marilyn. 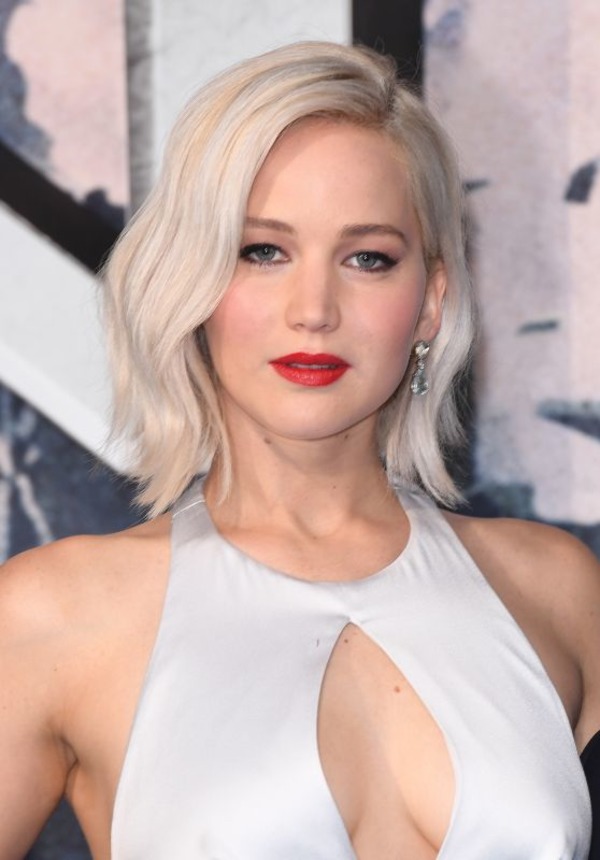 Price of the Dress: $4 Million

It’s an irony of fate, but our second heroine is the cult blonde too. Jennifer Lawrence is just 27, but she has already gained a reputation of a complicated personality. Jennifer is one of the most beautiful young actresses, but her personal life can hardly be called successful. Her love affairs to an actor Nicholas Hoult and musician Chris Martin didn’t last too long. “I can’t build simple relationships”, Jennifer complained in her interview. But no doubt, there’s a thing, which JLaw can build rather well – her reputation of the most elegant woman on the red carpet.

One of the most unusual images of the actress was presented in 2013, when Jennifer Lawrence got her first Oscar. Although Jen tripped and almost fell down on her way to the stage, still she remained the most elegant women at the ceremony.

Jennifer Lawrence dress costs $4 million, but don’t worry for Jen’s wallet – she paid nothing for it. Dior fashion house, which designed the dress, lent it to the actress for one evening. 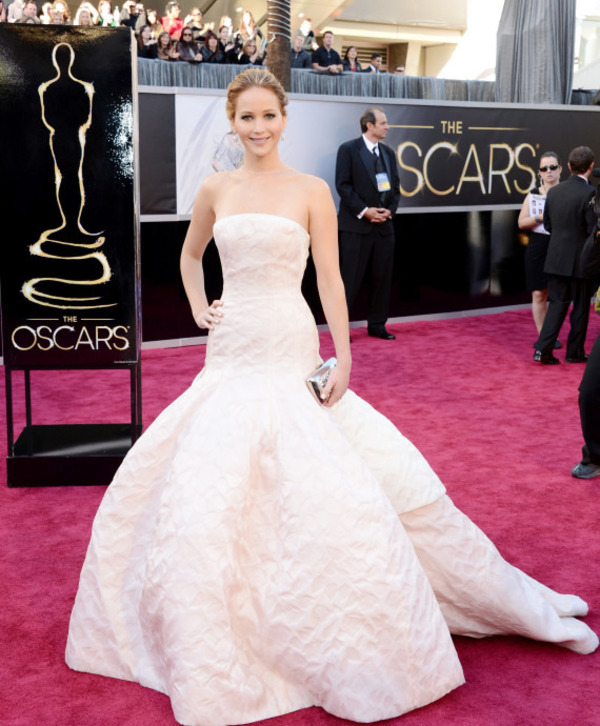 Although the dress was presented by Dior, its design is not typical for this fashion brand. So called “dress tube” was invented by Cristóbal Balenciaga and it was the favorite apparel of the actress Marlene Dietrich. The dress, made of structured ivory fabric, clung to Jennifer’s chest, waist and hips and then ended with a lush skirt and a long train. This silhouette is the ideal choice for women with a slim waist and quite wide hips – that’s why Jennifer Lawrence looked perfect in it. 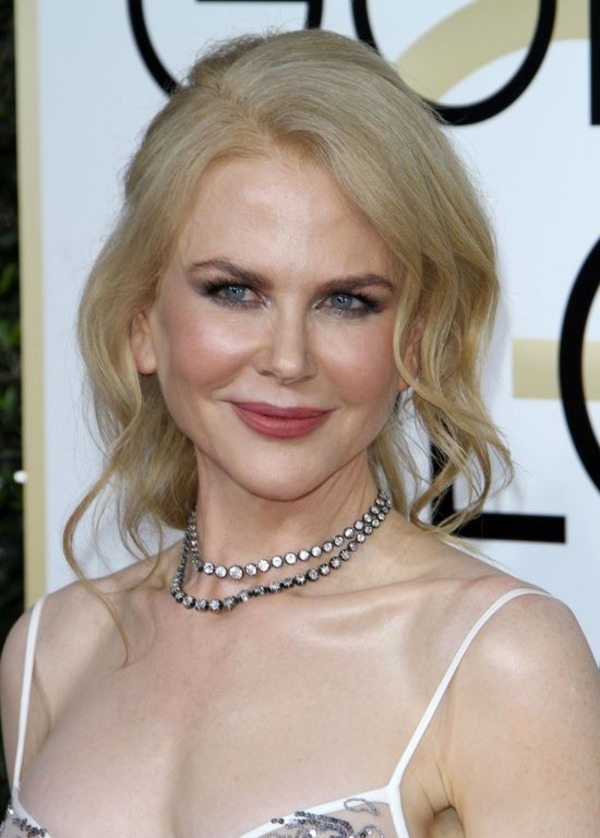 Price of the Dress: $2 Million

Probably, Dior dresses cost a pretty penny, but they always guarantee the perfect look. The other Dior dress appeared in the list of the most expensive dresses of all times. The actress Nicole Kidman didn’t regret impressive $2 million for this item of clothing and thus had become the main star of the evening.

Nicole Kidman put on long evening dress of unusual color, which officially was marked as “chartreuse”. That time Nicole was in the peak phase of her career. At the same time then she was a beloved wife of Hollywood dreamboat Tom Cruise. Nicole wanted to look special at Oscar-1997 and she collaborated with then-debutant John Galliano, the new chef designer of Dior. Galliano created for bright beauty Kidman the long chick gown, which resembled the famous sheath dress, invented by stylish Coco Chanel. The dress had no sleeves or collar and fit close to Nicole body. It demonstrated each curve of her ideal silhouette. The neckline of the dress was of square shape, it was decorated with elegant embroidery. Nicole’s long legs could be seen through deep side cuts. 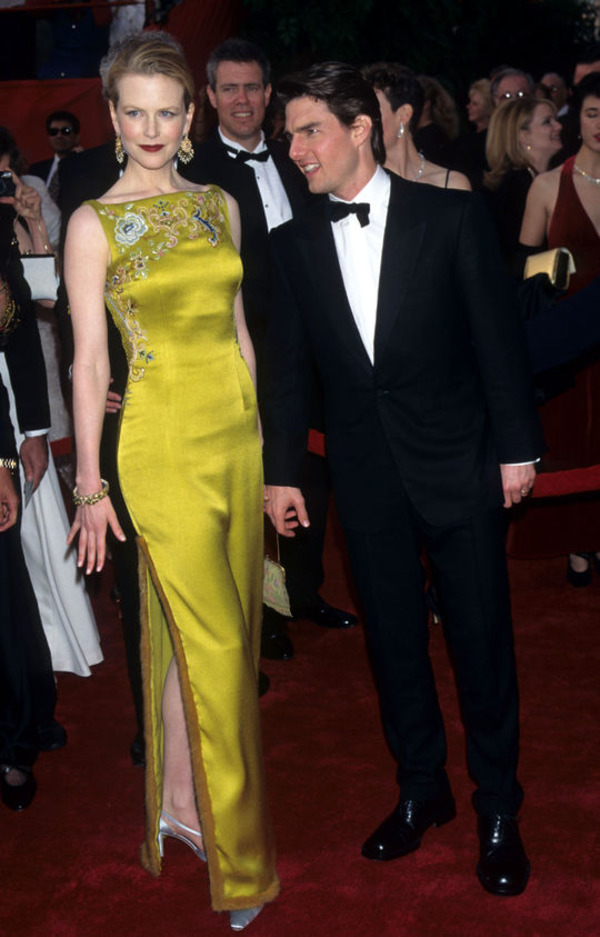 The incredibly expensive bright dress brought Nicole Kidman the status of the fashion icon. So, she invested her money reasonably. 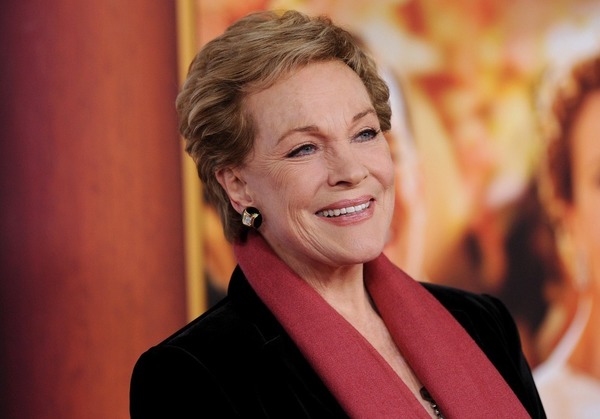 Very often the price of the dress is really high not because of the fabric it is made of or decorations, but because of the history, which stands behind it. The dress, designed for an actress Julie Andrews – if to be more precise, for her famous heroine from the movie “Sound of Music”, was sold through the auction for astonishing $1, 6 million. The anonymous lover of the movie paid the great price for an item of clothing, which was made of simple cloth and had really simple silhouette. 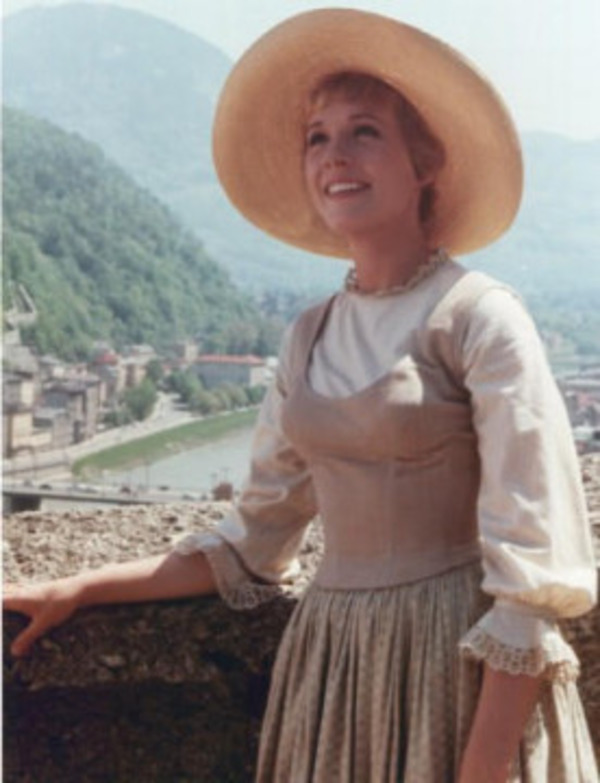 In fact, Andrews heroine Maria Von Trapp was very poor, that’s why the costume designer of the movie Dorothy Jeakins created the dress with the idea that its owner was poor. The dress was made of brown cloth, which was rumored to be made of a real curtain. Julie Andrews wore the dress over the simple blouse of wheat color. Her image till now is considered as the most interesting in the movie history. The versions of the dress are sold through actions all over the world. 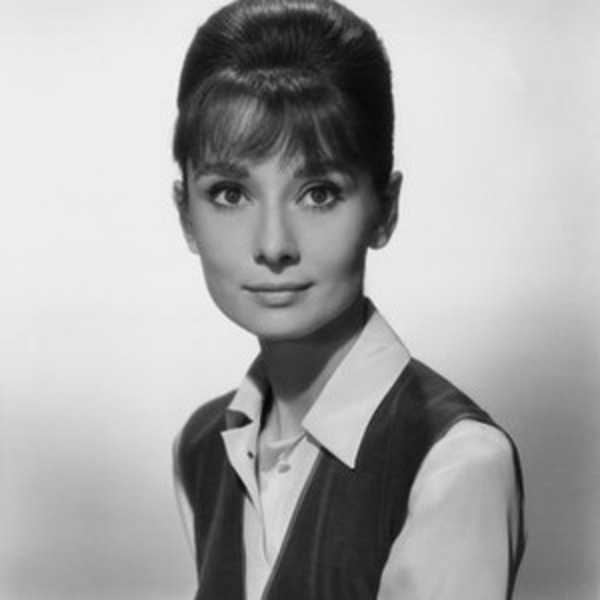 One more version of popular sheath dress was worn by fragile Audrey Hepburn in “Breakfast At Tiffany’s”. The black dress, designed by Givenchy, was sold from an action in 2006 for impressive $900, 000. By the way, the name of the buyer remained unknown. 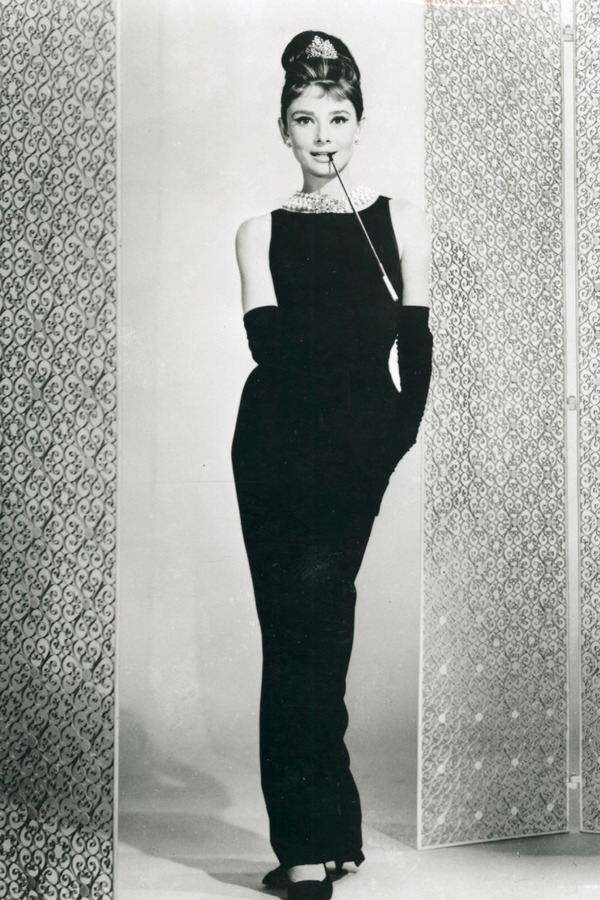 Although the dress resembles the design of Coco Chanel dresses, it was created by Audrey’s close friend Hubert de Givenchy. Hepburn, who was considered as his muse, agreed to put on just clothes of this legendary designer. Their creative tandem gave the world lots of stylish images, but this little black dress is, probably, the most successful. 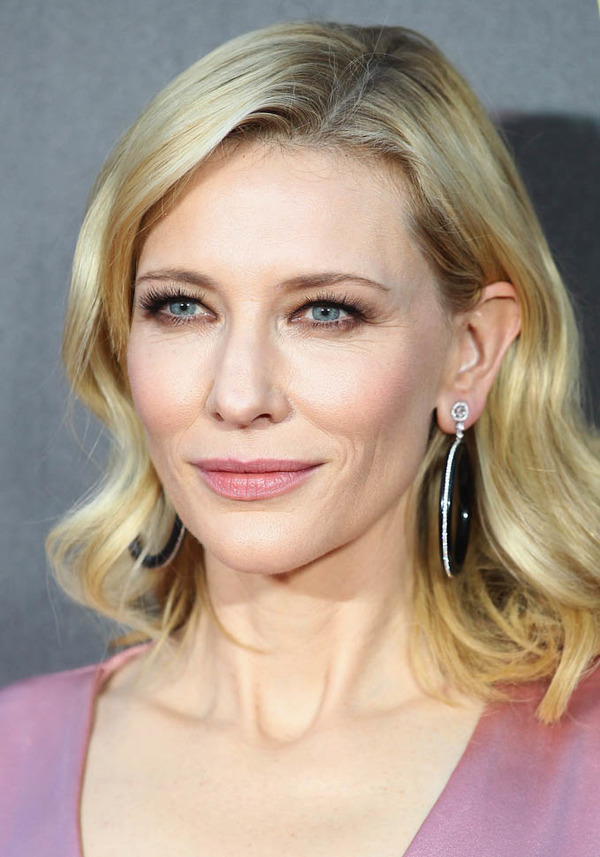 Currently Cate Blanchett is 48, and the actress never gets tired to experiment with her appearance. Several years ago she shocked people with her unusual hairdo (Blanchett changed her blonde hair color for pink). But earlier, in 2007 Cate Blanchett was known not as the lady-epatage, but as the woman with elegant taste.

Cate Blanchett was the best-dressed actress at Oscar-2007. She paid an unreasonably huge amount for an elegant piece of fabric – $200, 000. But each penny, which she had invested into the dress, was worth it. Blanchett’s dress was designed by Armani. Probably, it resembled famous “nude” dress of Marilyn Monroe, which she put on for John Kennedy’s birthday. But the classical color of a nude dress (invented by popular Hollywood costume designer Jean Louis) is beige, but Cate’s dress was dark grey. 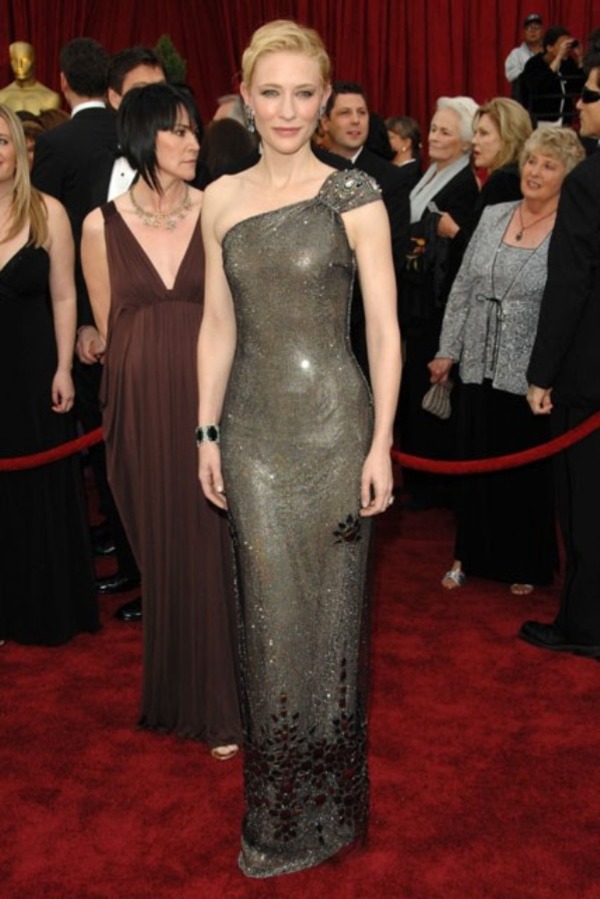 Cate’s slim and tall body was wrapped with a beautiful shining gown, which looked like the second skin. It was decorated with numerous Swarovski crystals. One of Cate’s shoulders was covered with a strap, while the other one was naked. Till now her look is considered as one of the best, which has been ever seen at Academy Award ceremony. 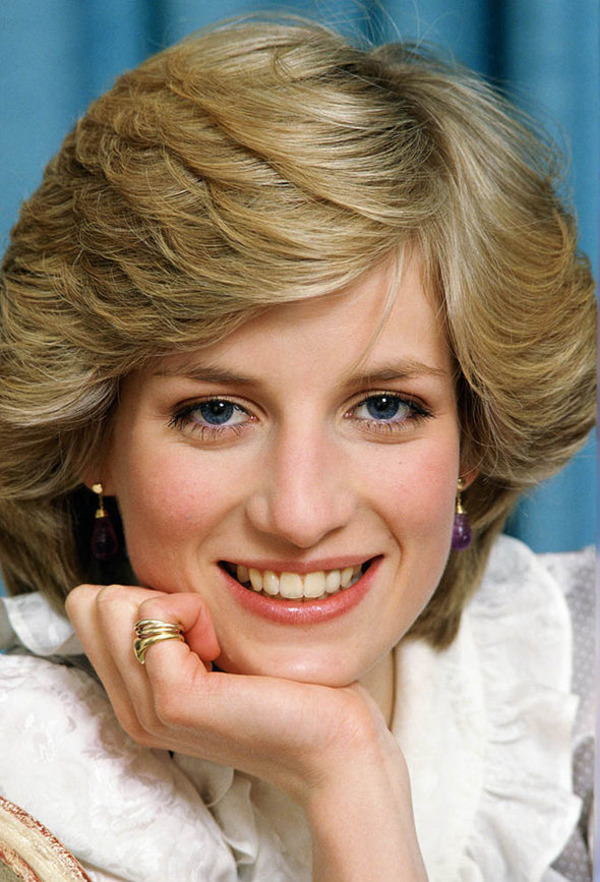 The dress-tube, which has already been mentioned in our list, is popular among the stars. That’s why quite often famous ladies wear the dress of similar design at various parties, evenings and ceremonies. The black classical tube dress appeared in the wardrobe of late Princess Diana too. She put on the dress, designed by  Victor Edelstein, for White House dinner in 1985. Her look impressed the talented actor John Travolta, and he invited Princess Diana for a dance. 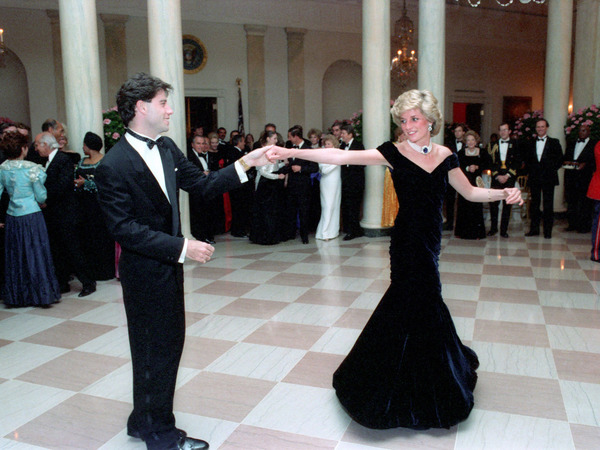 Princess Diana sold her legendary dress through an action for $133, 000. She spent the money for charity. 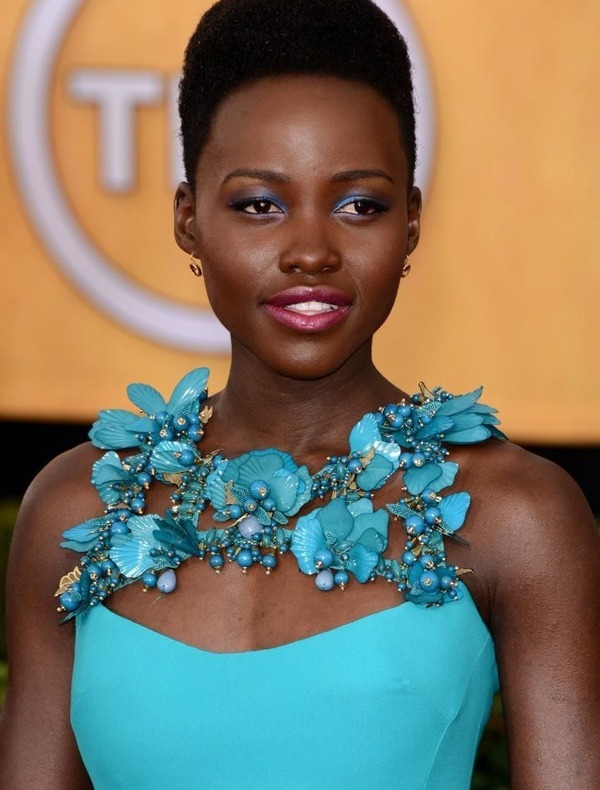 The actress Lupita Nyong’o rose to fame due to her acting in the movie “12 Years a Slave”. The actress, who has ideally shaped body, put on Calvin Klein dress, which she bought for astonishing $106, 000. The purely-white dress fit close to Lupita’s body. The bodice of the dress gave the viewers an opportunity to see the small part of the actress’ breasts. But it was not the only reason of the dress popularity. Calvin Klein representatives announced that the dress was decorated with real pearls. Probably, that’s why the unknown thief stole it from Lupita Nyong’o hotel room. 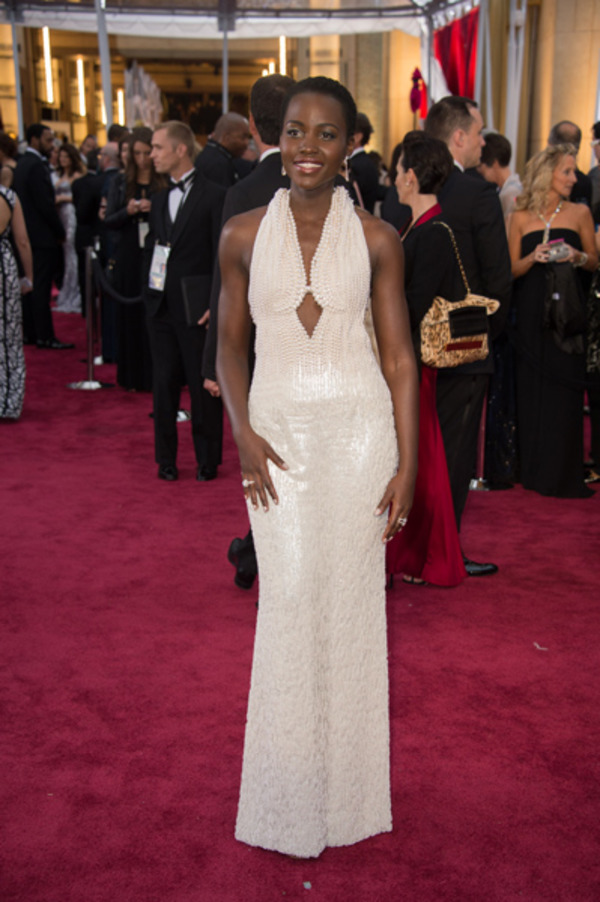 But later the criminal returned it. He called to the police and told, where they can find a dress. “The Hollywood pearls are fake”, the thief added. 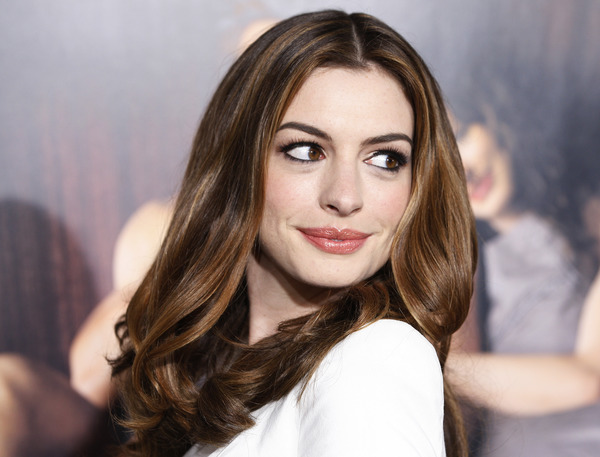 The main princess of Hollywood, Anne Hathaway has great body, an open wide smile and thick long hair. Such a great appearance needs a worthy frame too. That’s why Anne Hathaway spends thousands of dollars for her gowns. One of her best choices was a red long dress, designed by Valentino, which she put on for Oscar-2011. 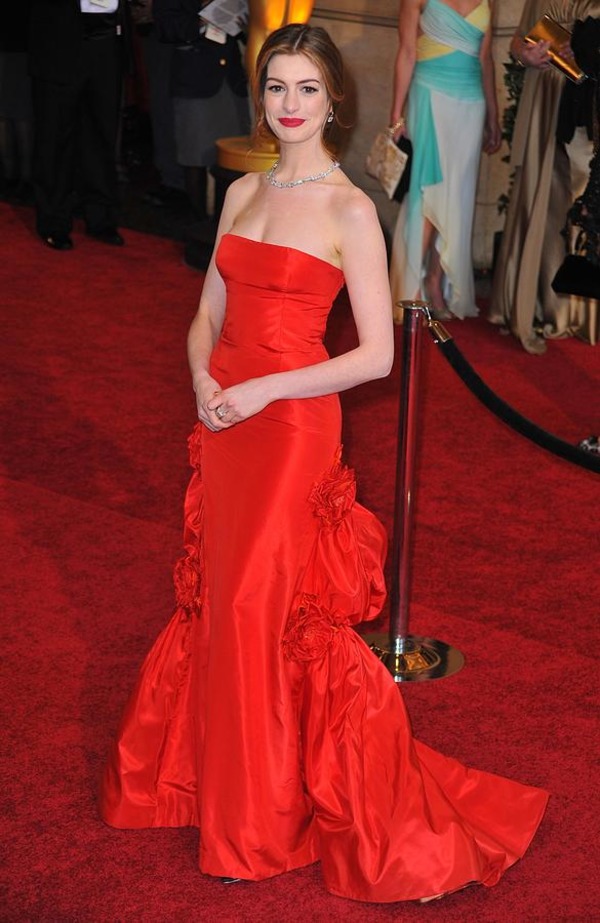 The actress paid $80, 000 for it and had easily become the star of the party. 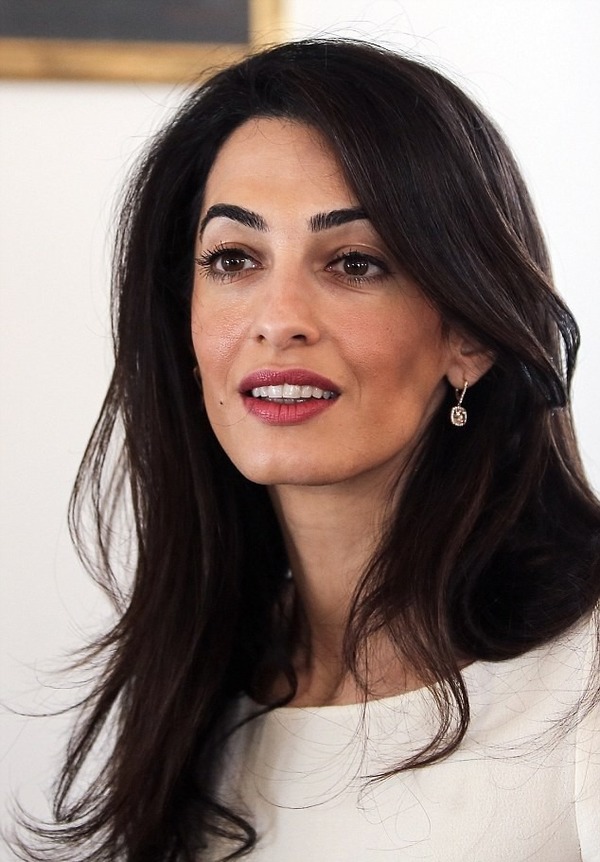 The beloved wife of handsome George Clooney looks like an actress, but she earns her living as a lawyer. The big part of her wealth the woman spends for classy dresses. One of them cost really a lot – $30, 000. Amal Clooney put on a luxurious black one-shoulder dress for Golden Globe ceremony 2015. 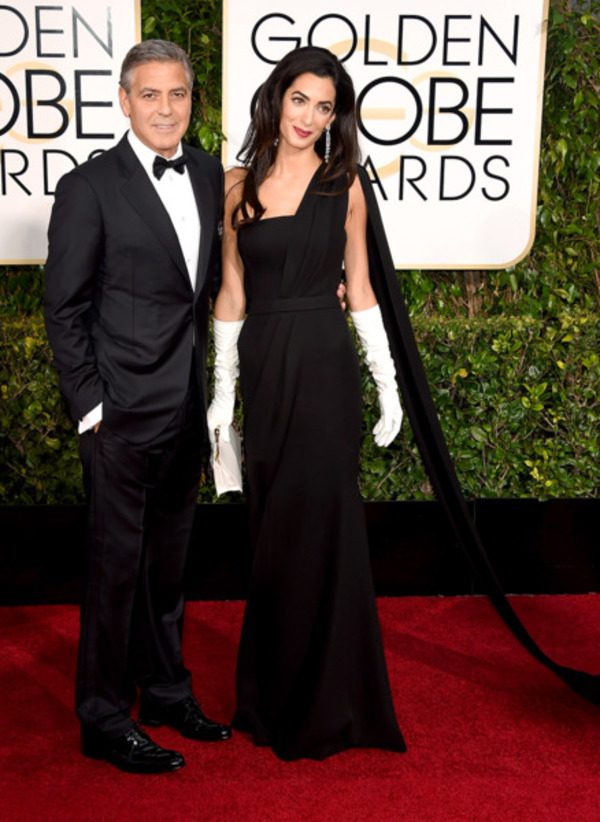 To look even more elegant, Amal chose long white gloves and white clutch. Although $30, 000 dress seems not so expensive in comparison with other clothes in our list, it looked so great, that girls all over the world immediately started to buy its replicas.