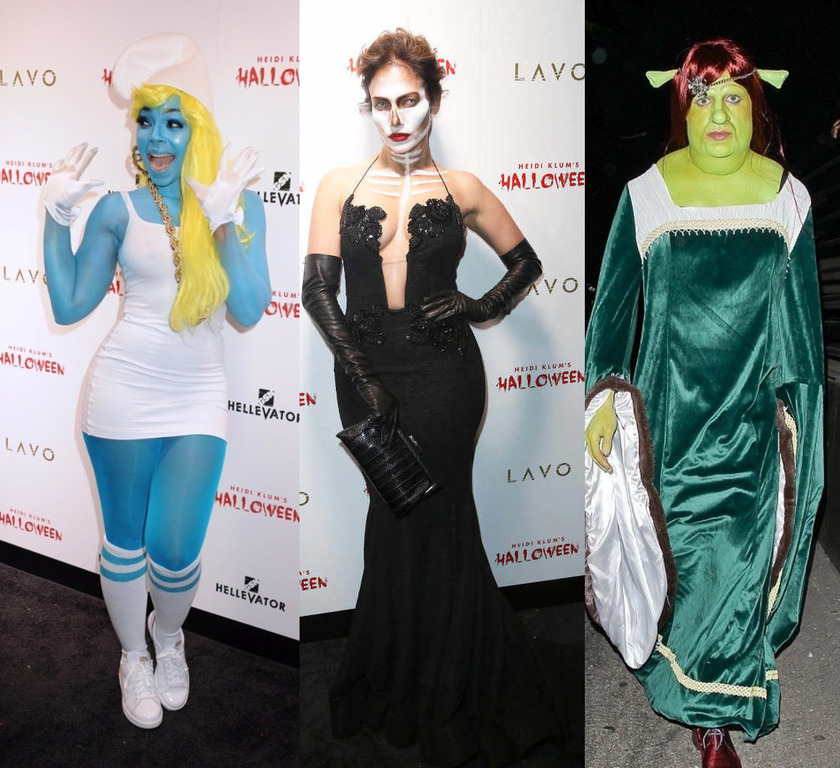 Pumpkin pie taste, mulled wine and a bunch of yellow leaves… That’s how most of people understand autumn – a time of melancholia, philosophic thoughts and sad waiting for cold weather.  We all have our own ideas, how to get through autumn. Some of us drink gallons of coffee, the others leave everything and go to warm countries. But there are people, who are planning their Halloween party.

Celebs are not an exception. Probably in their rich bright life something is missing too in the fall. That’s why many of them start visiting boutiques in order to get the most unusual Halloween costumes. Let’s have a look, how well that worked out.

1) Heidi Klum as the Gold Cleopatra 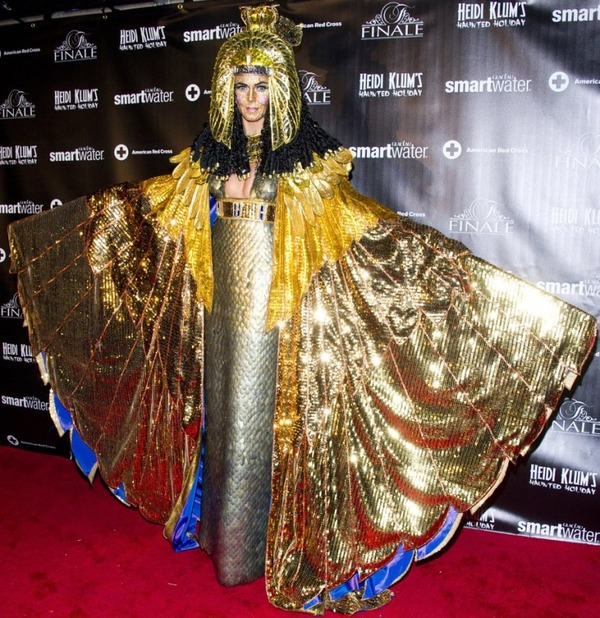 An ex-super model, business mogul and occasional actress, Heidi Klum knows, that career is not the most important thing in her life. That’s why Heidi spends lots of time with her family. The mother of 4 children, she is ready to all of that fuss in her house. “In our house Halloween party is every day”, she joked once in her interview. 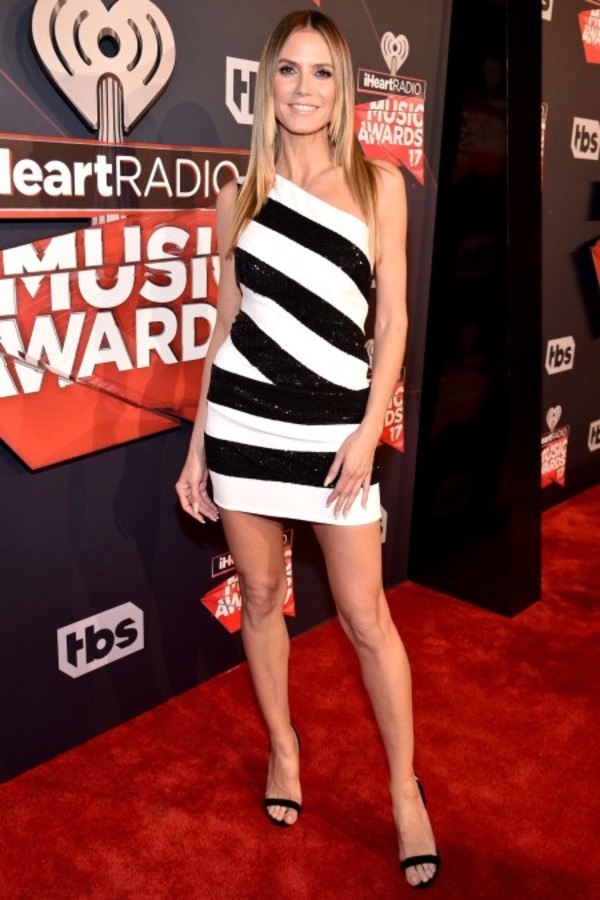 Probably, that’s why Klum stands out of other celebrities for her unique looks on Halloween. Each year Heidi creates some unusual image for this holiday. She used to wear a suit of Jessica Rabbit, of a spooky butterfly and of Glamorous Granny. One of the most popular Heidi’s suits she put on in 2012. She looked like Cleopatra. Then Heidi chose a long golden gown, a black wig and a huge golden crown. Her makeup was perfect too. Klum asked the popular makeup artist Bill Corso to help with her face.

The X-Factor alumnus, singer and songwriter Leona Lewis became popular in 2007 after the release of her debut album “Spirit” in 2007. In spite of commercial success of her music, Lewis values her personal life higher, than professional. Once she cancelled the concert tour just because of break up with her long-term boyfriend.

No wonder, that such an emotional girl likes to change her image. In 2015 Leona shocked her fans, when she uploaded her picture in the image of Medusa. 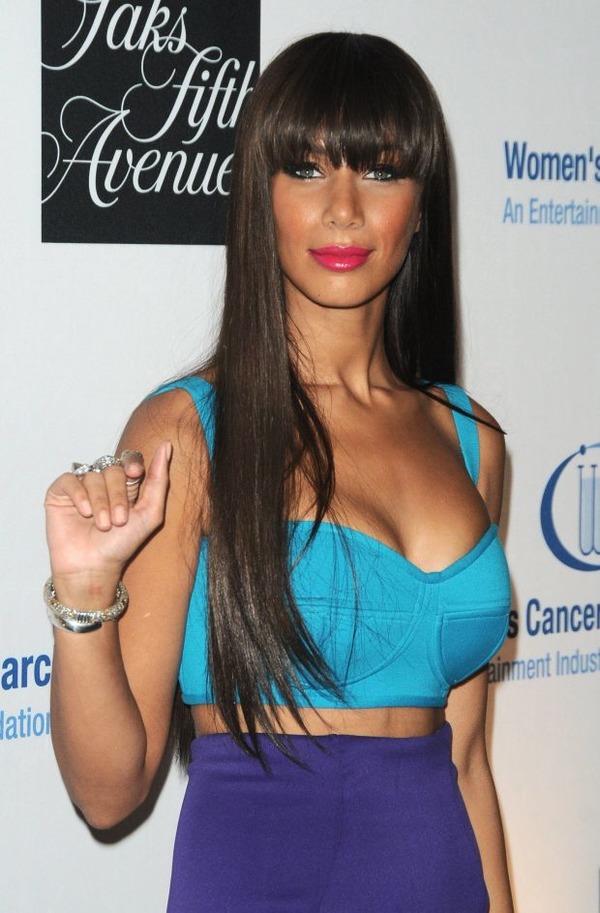 Leona Lewis regretted neither time nor money to create a perfect look for Halloween. She put on a long black dress and short top of the same color, which were supposed to look like medusa’s body. There was a green cape on the singer’s shoulders. Leona’s makeup was unusual too. The woman covered her face with the thick layer of green foundation. In addition she colored her lips with a green gloss. Leona’s eyes were colored with black eyeliner and her hair looked like numerous slim snakes.

Thus Leona Lewis has become the queen of Halloween party. She shared her pics in Medusa suit through social media. 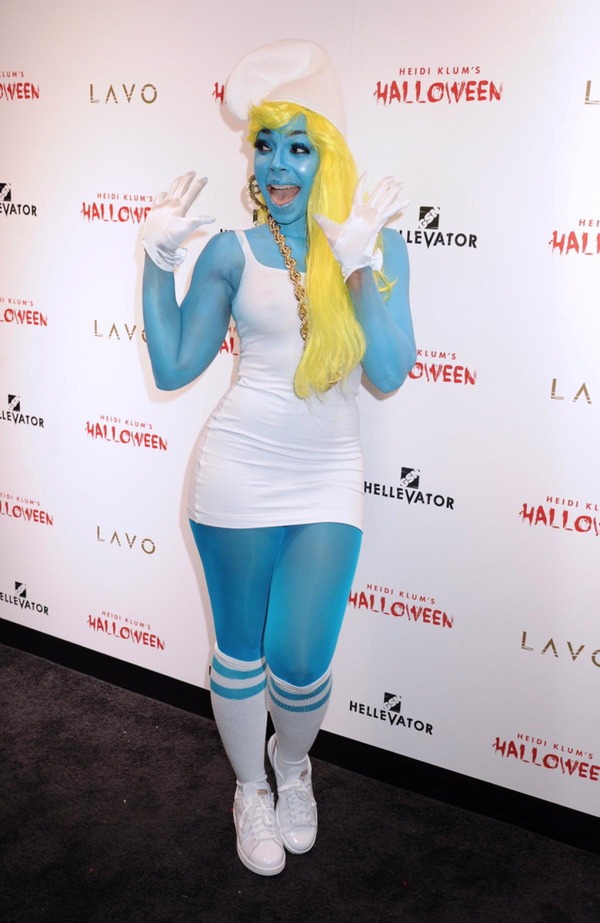 Well-shaped American singer with an olive skin, Ashanti is ready for everything to look natural in her new image. The young celebrity surprised her fans and colleagues, when she … had changed the color of her skin. Ashanti decided to look like Smurfette (the heroine of a popular cartoon) for Halloween. 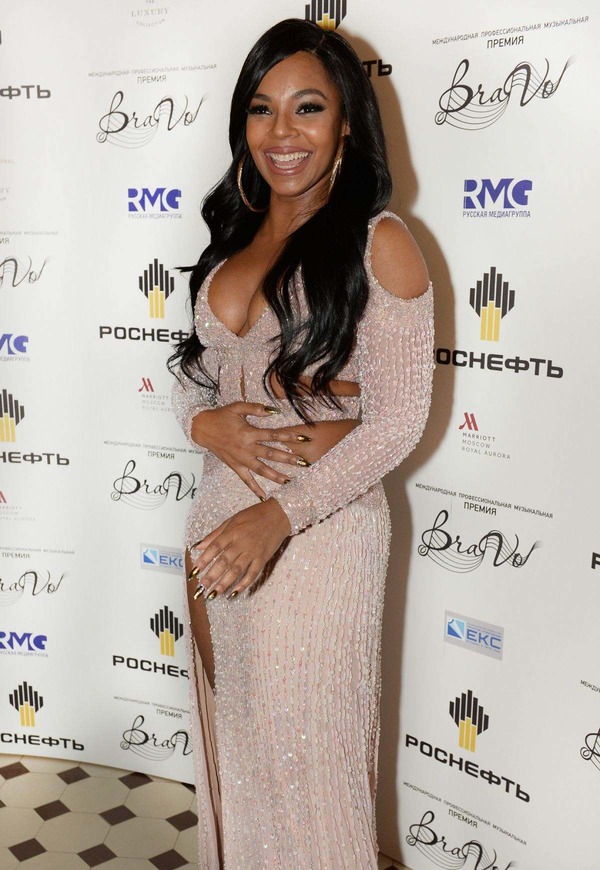 To achieve her purpose, Ashanti not just put on a short white dress, white long boots and heavy golden chain, but also colored the skin of her body. She looked blue from top to bottom – just like her personage. That look became one of the most memorable at Heidi Klum Halloween party in 2015.

4) Jennifer Lopez as a Skeleton 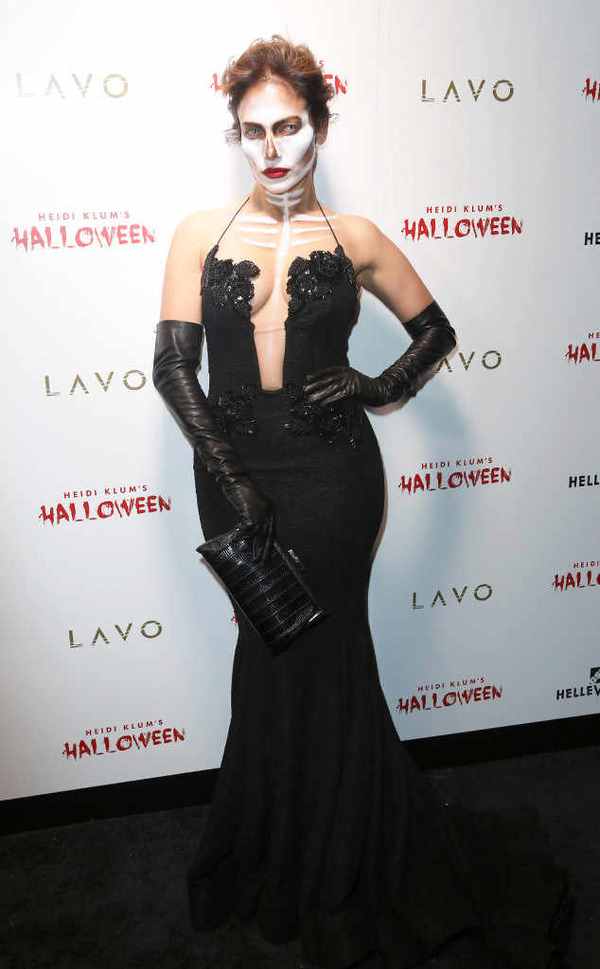 Pop Diva Jennifer Lopez is known by her great taste and hot looks. Halloween is the day, when the door to the world beyond is opened. But even staying in front of that door, Jennifer Lopez wants to remain elegant. That’s why she managed to become the most beautiful skeleton in the world in autumn, 2015. 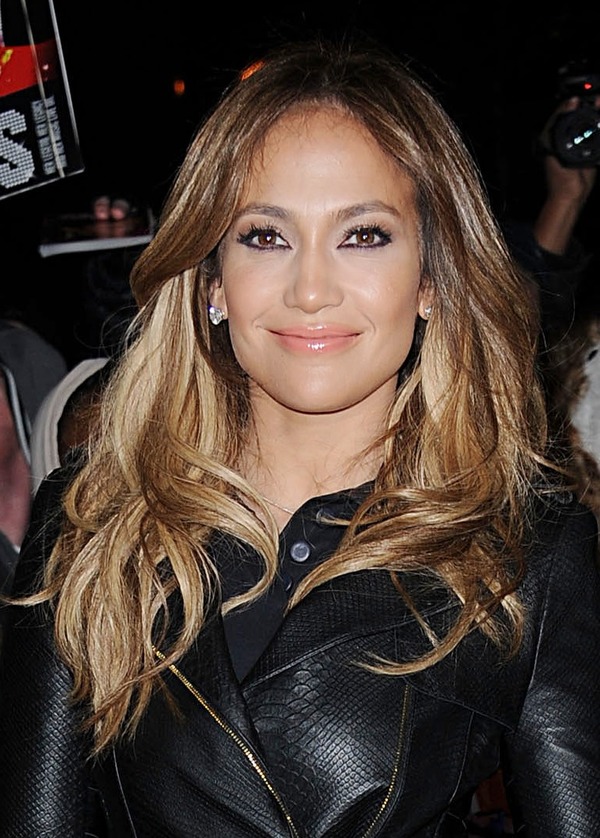 The actress and singer chose long tight dress, which didn’t cover her beautiful neck and breasts. She added long leather gloves and a small clutch. JLo’s face was covered with a thick layer of foundation. Her skin looked completely white and there were white stripes on her chest, which looked like skeleton bones.

The only thing, which made Jennifer look different from a spooky skeleton, was a red color of her lips. We have no words, just “Gorgeous!” to describe Jennifer Lopez’s costume. 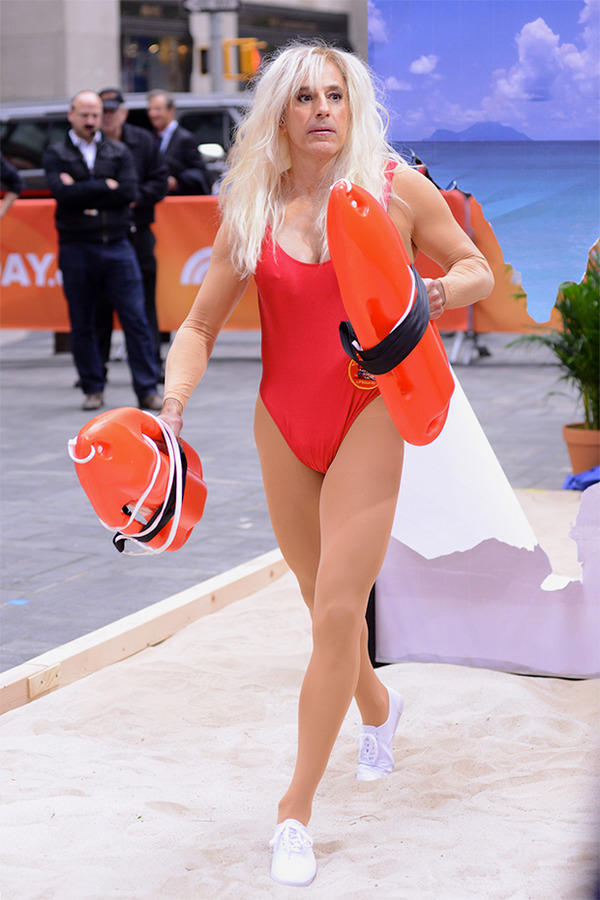 Many girls all over the world dream to look as hot as Pamela Anderson in “Baywatch”. If you are one of them, consult Matt Lauer, how to copy that image in the best way. The popular American TV host and journalist, he spends free time with his 3 children. Probably, his kids taught Matt to be cool on Halloween. In any case, he impressed his fans with an unusual look in 2014. Matt put on a red swimsuit and added a long blonde wig to create one of the most memorable scenes on TV in 1990-s – Pamela Anderson running on the beach. He demonstrated that costume for Halloween in his The Today Show, when Pamela Anderson was invited to his program as a guest. 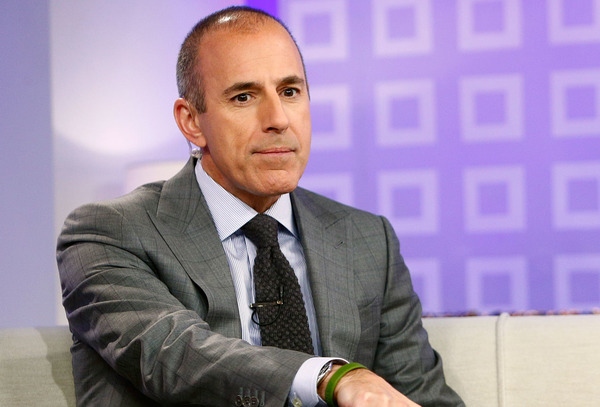 Although Matt’s  legs and hips looked not so fit as Pamela’s, still the actress liked the idea and characterized Matt Lauer as “sexy”. 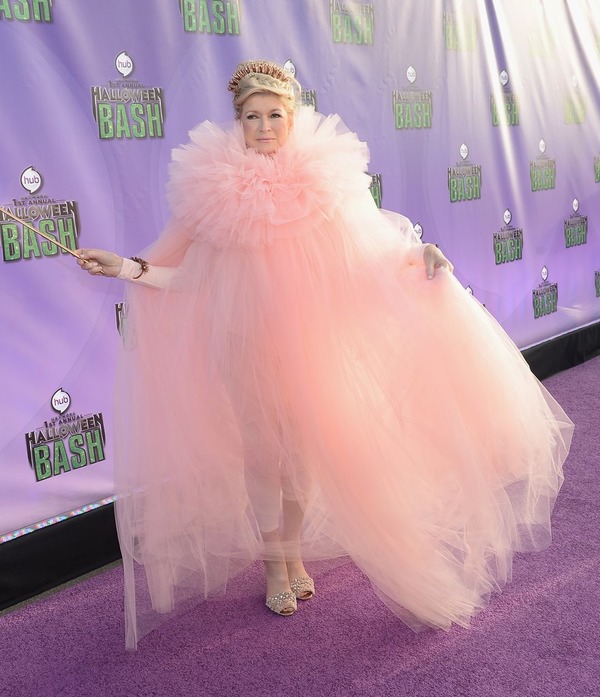 Martha Stewart is one of the most contradictory celebrities in the world. The lady, who serves as the role model for many American and European women, has experienced everything, starting from international glory and wealth and ending with a bankruptcy and prison.

But everyone is equal for Halloween, so Martha Stewart, like any other star, had to look for some unusual costume. In fact, she solved that task perfectly. Stewart turned into Glinda the Good Witch for a while. 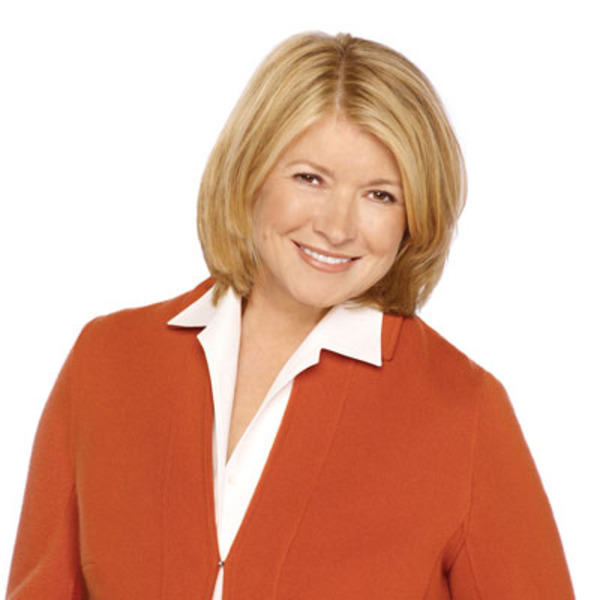 The good witch of south, to whom Dorothy, Toto and her companions went for advice, is the best choice for Martha, who gives lots of recommendations to all women in USA and worldwide. To look like her favorite heroine, the chef Stewart put on a long fluffy dress and a pink crown. She was one of the best-dressed celebs for Halloween 2013.

7) Kim Kardashian as Catwoman and Kanye West as Batman 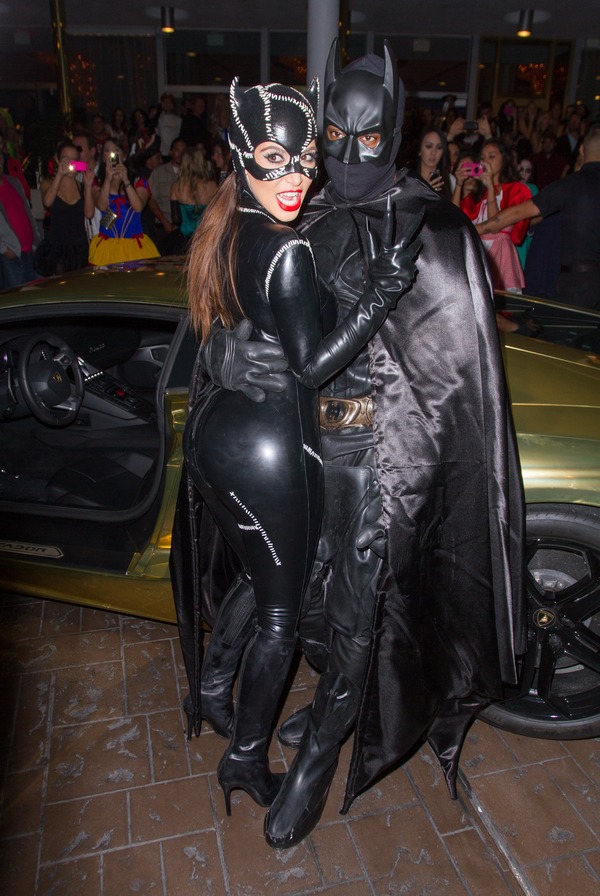 Yeah, Kanye West decided to save the world one more time. Probably, not the whole world, but Gotham at least. To achieve that purpose, he put on Batman suit (which is ranked as one of the most expensive Halloween costumes in the world). 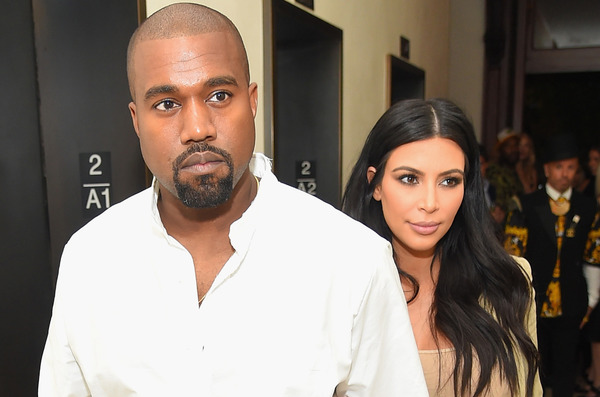 His hot wife Kim Kardashian put the costume of the character from the same comic book. She wore a suit of Catwoman. No need to say, that Kardashian-West looked perfect in a latex jumpsuit, wearing a mask. The reality show star colored her lips with a bright red lipstick, thus having added +100 to her magnetism.

8) Fergie as Toddlers and Tiaras Girl 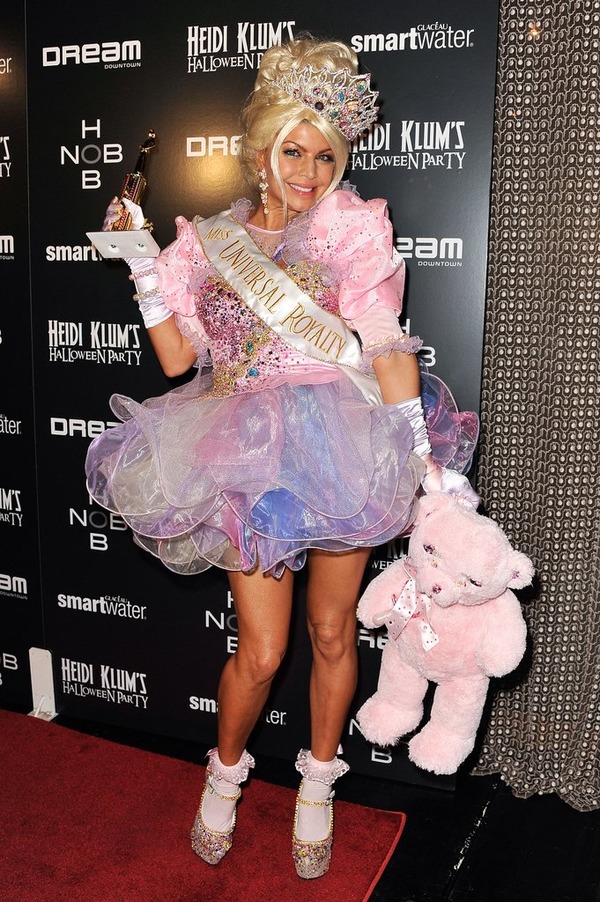 Toddlers and Tiaras was a renowned reality TV show in USA. It was on air during long 7 seasons and told about the preparation of small girls to beauty contest. The show got contradictory reviews, because of too “adult” image of kids, who wore provocative dresses and makeup. That’s why the show was closed, nevertheless it inspired Fergie to create an unusual Halloween image. 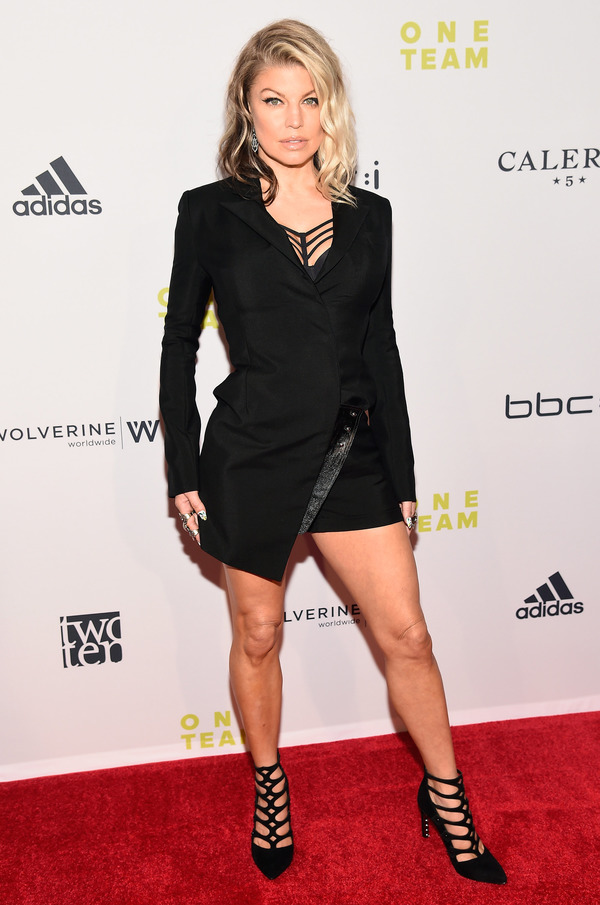 The singer put on a short fluffy pink dress, white shining shoes, covered with sequins and short white socks with frills. She added a high blonde hairdo (a wig, of course), decorated with tiara. To look exactly like famous toddlers, she took a pink teddy bear in her hand. The costume and shoes were designed especially for Fergie by a well-known designer Marco Marco. 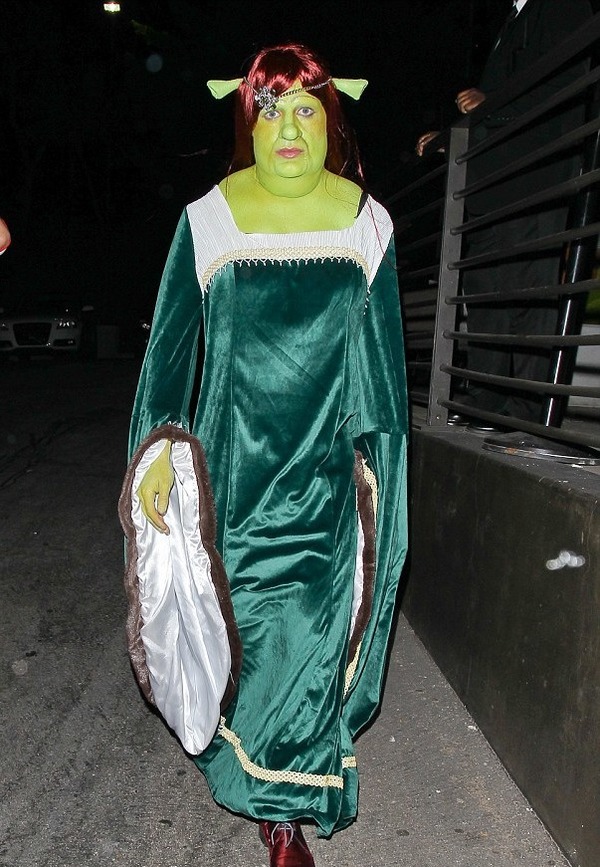 What is the main feature, which turns an ordinary actor into an incredibly gifted one? That is the ability to change. If you look at this “Princess Fiona”, you may not even recognize a popular American actor Colton Haynes.

Colton rose to fame as Jackson Whittemore in “Teen Wolf” and as Roy Harper in “Arrow”. After the international success of the projects, Haynes was crowned as the most handsome man on the planet. But for Halloween 2014 the actor chose the look of Princess Fiona in her “ugly” stage. 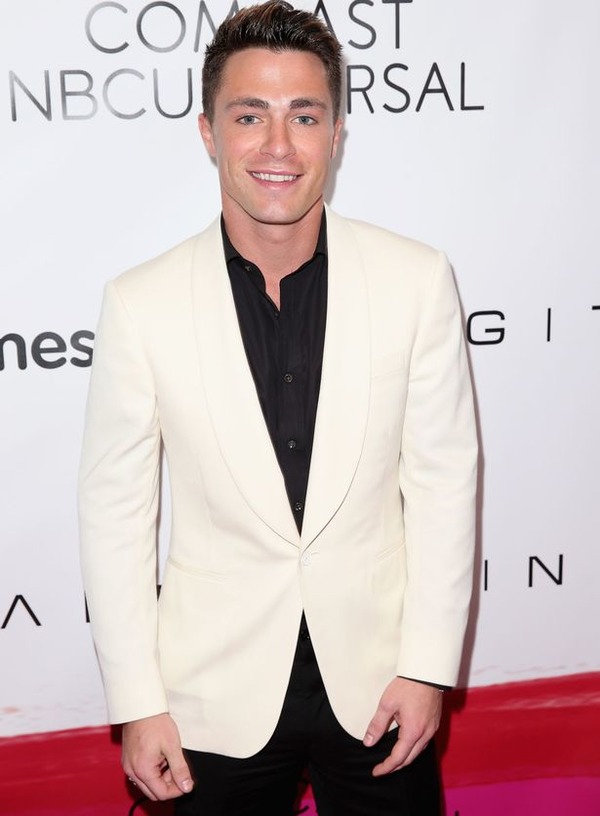 To be exactly like his personage, Hynes put on a long green baggy dress and light brown wig. The team of makeup artists was working hard during several hours to cover actor’s skin with green make up and build a second chin. Probably, that was not an easy thing to create such an image, but it was worth all the efforts, as Colton Haynes’s Halloween costume was named as “the best one of all times”. 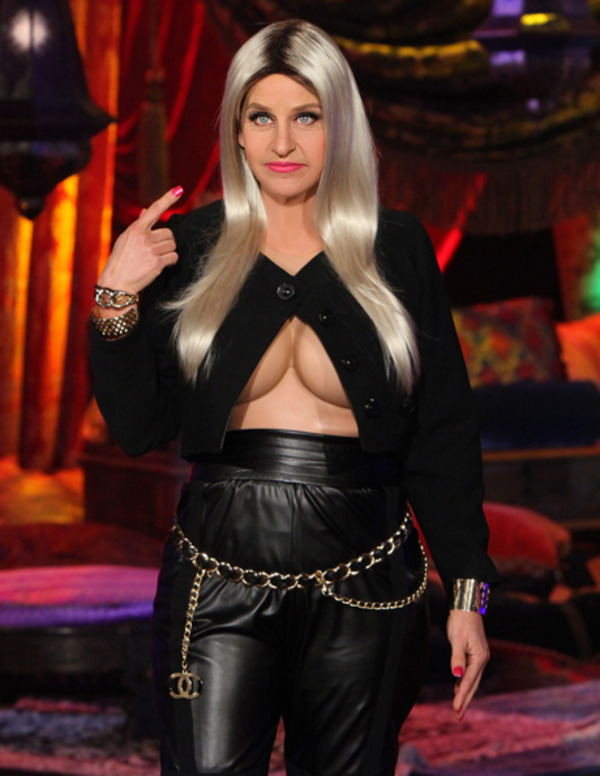 Most of people know Ellen DeGeneres as a talented TV host, which is different from the others by her dance moves. To look even more unique in the eyes of her fans, Ellen DeGeneres “channeled her inner Nicki Minaj”. Ellen hosted Halloween episode of her show in 2014, wearing a long blonde wig, a small black leather jacket and tight leather pants. The jacket opened the part of huge brests (Ellen swore, “they were real”) and later DeGeneres demonstrated her “super base” – her hot thighs – too.

As Ellen explained, Nicki Minaj had appeared as the guest of her show several weeks before Halloween. Minaj wore the same suit and shoes as Ellen and the part of her breasts was also visible. 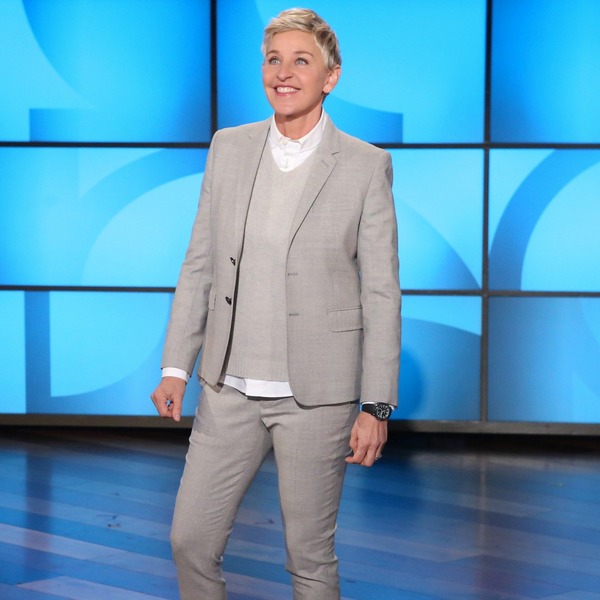 The show viewers boasted with laughter, when DeGeneres went out. Nicki Minaj watched the show too and later approved Ellen’s look in tweeter, calling her “more sexual than usually”. 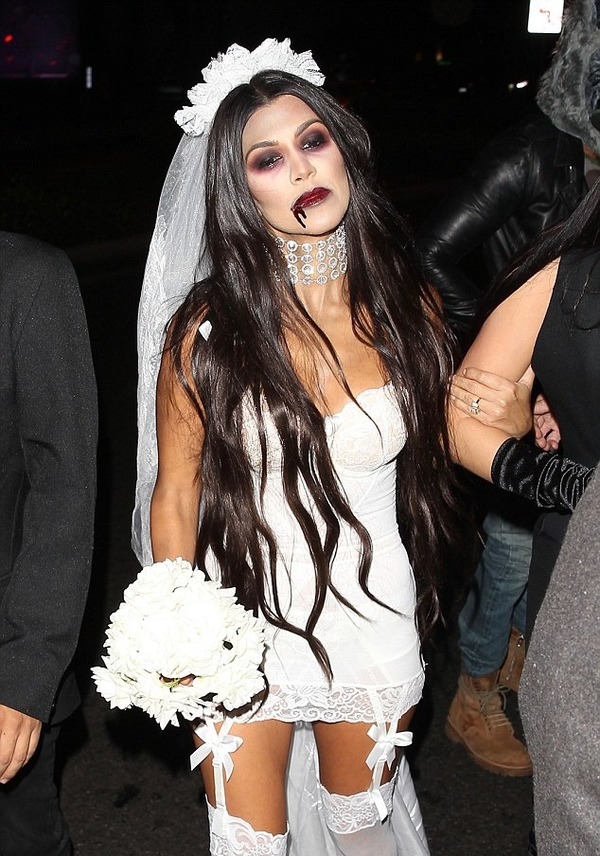 Kourtney Kardashian cohabited with Scott Disick during several years and even gave a birth to their three children, nevertheless she didn’t marry him. Probably, that’s why she decided to dress like a bride. To look more spooky for Halloween, Kourtney added some terryfying details to her image. 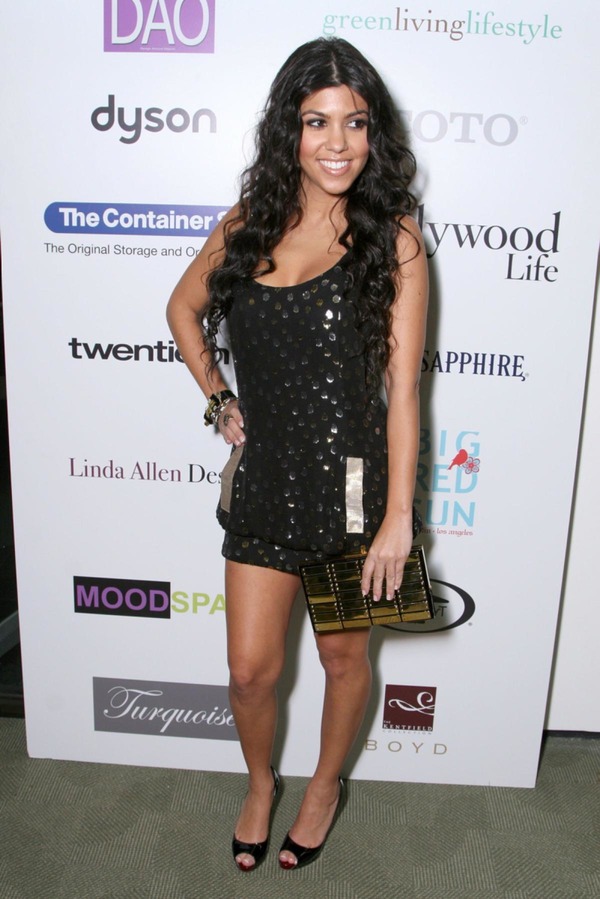 She put on a short white dress and a massive necklace. Kourtney made really scary makeup – her character had white face, dark lips and the small trickle of blood in the corner of the mouth. 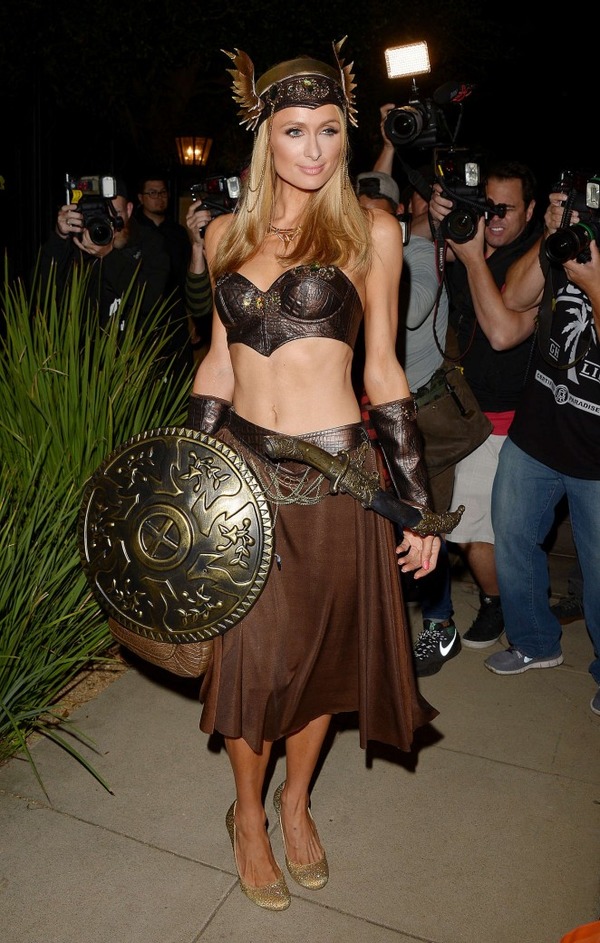 Paris Hilton is known as the lover of Halloween party. The actress and model tried on various Halloween costumes, and each year she was photographed for various issues as the best dressed celebrity for Halloween.

But in 2015 Paris had outdone herself. She put on the suit of Princess Warrior, which looked rather hot, than scary. Hilton demonstrated her well-shaped body, covered with two pieces of leather – one of them served as her bra and the other was her skirt. To be more convincing, Paris took a metal shield in her hands. In this costume the actress visited George Clooney Halloween party. 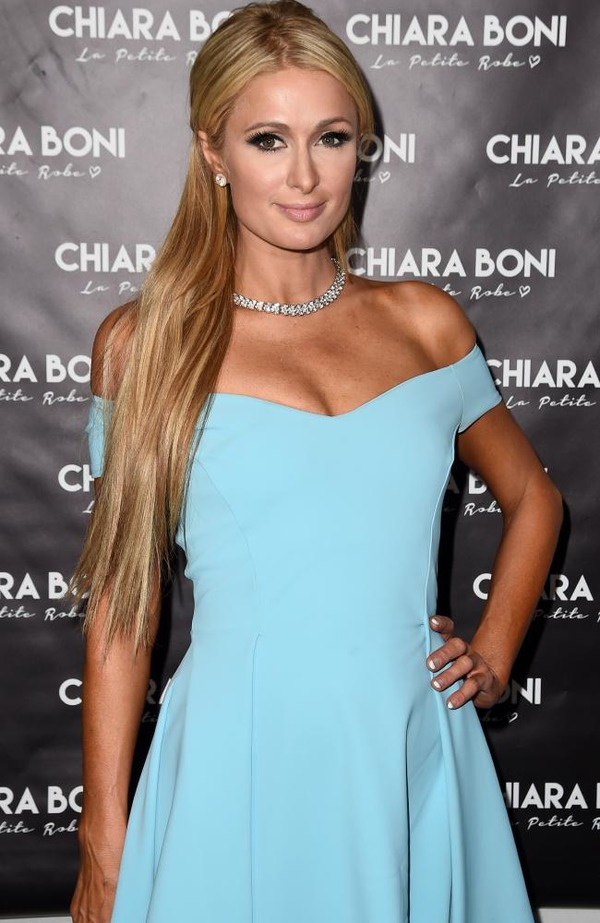 Celebrities demonstrated high level of taste and imagination to look perfect on Halloween. Use some of their ideas and have fun for Halloween this year!