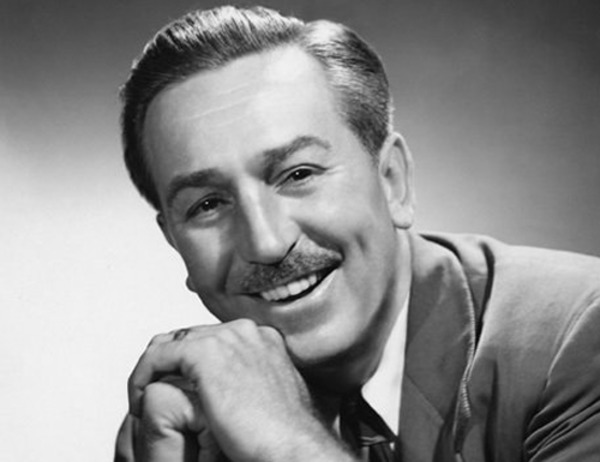 “I thank God that he gave us Walt Disney. It's amazing how one person can change the lives of us all and give us so much. Thank You God and thank you Walt Disney.”

“Walter Elias Disney was a great man, and the world lost much when he died early.”

“Too bad Walt couldn't live forever. I would give almost anything to meet such an amazingly brilliant man who has touched so many including myself!”

Why do we need motivation? Because climbing a success ladder is always hard. We think that people of success were born with a silver spoon in a mouth. But each self-made man – an actor, a businessman or a writer, knows, that his success is measured with galloons of coffee (or even with galloons of something stronger), with hundreds of sleepless nights and with millions of hours at work. Success is measured with refusals of employers, dismissals from work and problems with a partner. And having passed through all these obstacles, the most talented and persistent people get the things, which the others can just dream about: tons of cash, love of numerous fans and recognition. 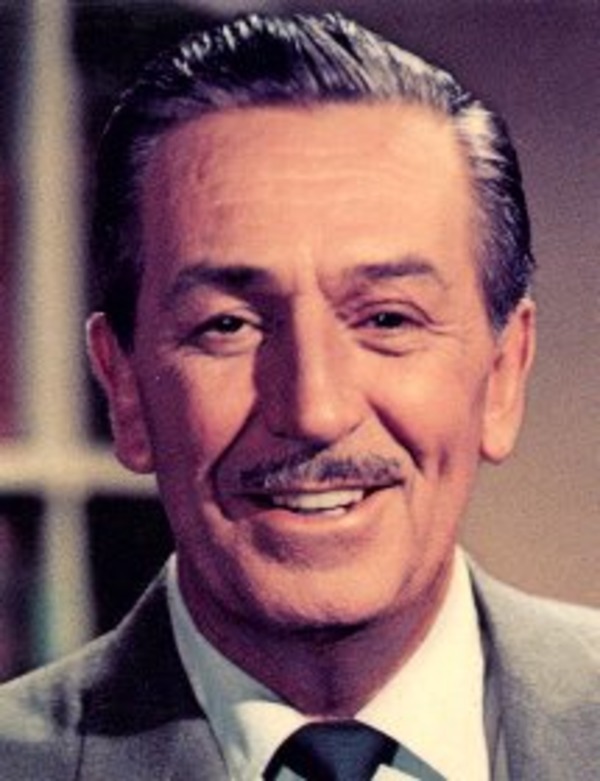 PiNetworth team never gets tired to admire such celebs, who built their success with their own hands. Today our hero is immortal Walt Disney. The citations, you have looked through at the beginning of this text, belong to Walt Disney fans. Let’s read his incredible success story and use him as the role model and motivation for us!

Very often Walt Disney is named in press as “the creator of dreams and fairy tales”. He made childhood of each person happier. But his childhood wasn’t so fun. 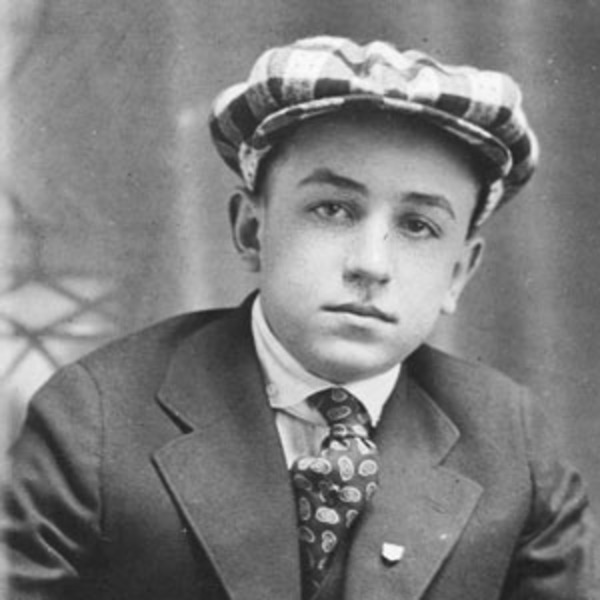 Walter Elias Disney was born on December 5, 1901 in Chicago, IL. His parents – Flora and Elias Disney – lived from hand to mouth. While his mother spent every single day, caring about five kids, his father struggled for each penny at work.

Elias was a businessman, but his numerous attempts to become rich failed all the time. He tried to earn his living as the owner of a building company, the orange grower and newspapers seller. But his income remained miserable and ego remained hurt.

Disappointed by his career losses, Elias vented his anger on his wife and kids. He beat small Walt almost every day, and soon, the future American legend started to hate his father. He didn’t even believe that Elias was his biological parent. 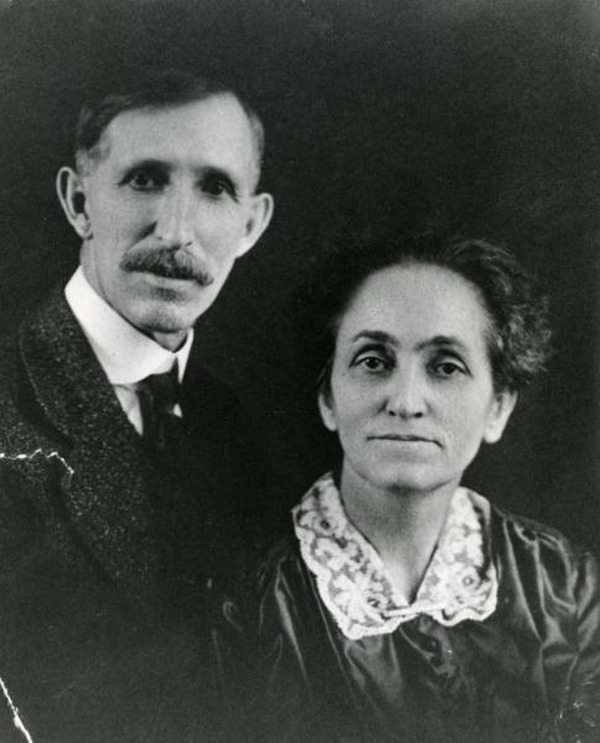 Walt’s reality was quite grim, that’s why he created his personal dream world. The boy liked to spend time with his mother, who had always told him fairy tales, most of which she created herself. Besides, he liked to talk to his elder brother Roy, who later had become his business partner and co-owner of The Walt Disney Company.

When Disney turned 5, his parents left Chicago and moved to a farm in Marceline, KS. There Walt spent long hours, walking in the air. He played with numerous domestic animals – piglets, kittens and puppies, which later had become prototypes of his animation heroes. Do you remember “Three Little Pigs”, produced by Walt Disney studio? Yes, the famous artist used his domestic piglet as the prototype. 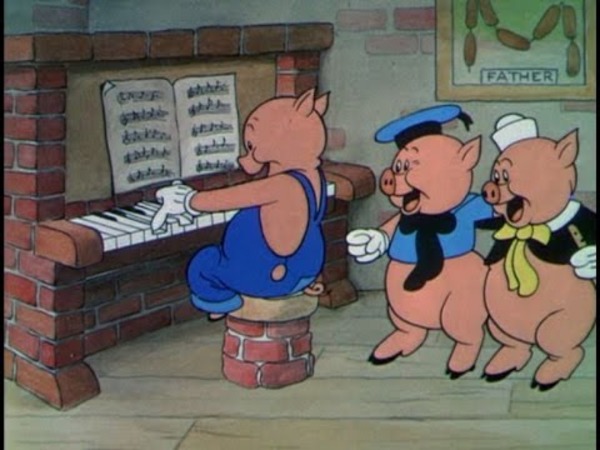 Small Disney had a very special hobby, untypical for a village boy. He liked to draw. Walt begged his father to buy pencils, paints and paper for him, but Elias refused. He considered painting as a useless occupation, that’s why he always punished his son, if saw him painting. 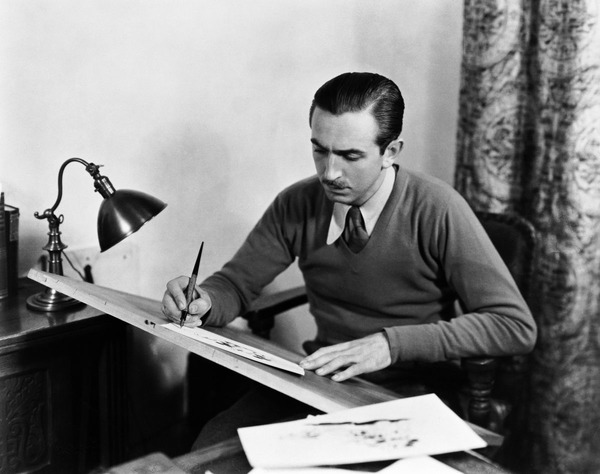 But small Walt drew everywhere, he could. He used straws and sticks to create his childish pictures on the sand or resin. Once he even earned some money, having sold a horse picture to his neighbor.

In 1917 Disney parents returned to Chicago. There Walt changed a number of odd jobs in order to make the ends meet. He served as an emergency cab driver during the years of World War I.

After the war he found a job of a cartoonist in a local newspaper. But his chief didn’t notice Disney talent and fired him.

Walt Disney met his big break in 1923. After a string of failures he decided to move to LA, where his brother Roy had already resided. Roy Disney was the only one in his family, who believed in his brother’s talent. He offered Walt to create their own company, which specialized on making animation films. 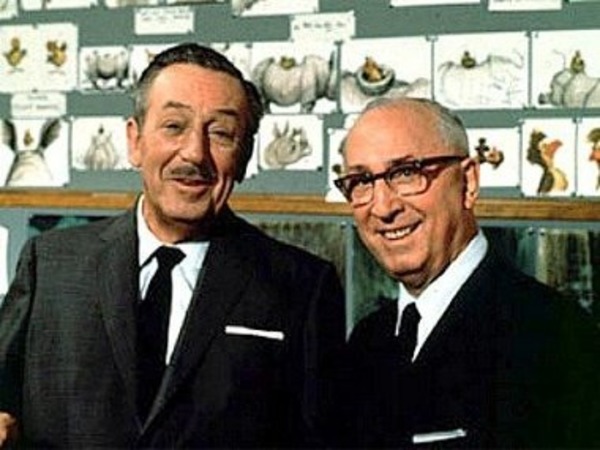 Thus, two brothers rented a garage, where they founded Disney Brothers Studio, which later turned in The Walt Disney Company.

Not need to enumerate numerous Walt Disney achievements. It was he, who created first high-grade cartoons in USA. His animation films differed from the others with its natural personages, joyful music and interesting plot. “Cinderella”, “Babes in the Woods”, “The Little Matchgirl” and many other great animations were created by the talented artist Walt Disney, who had no higher education and no seed capital. 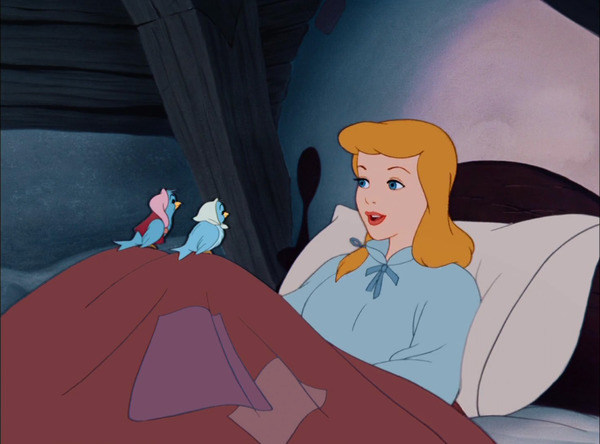 The list of his titles and awards is endless. He got 29 Oscars and 4 Emmys, received honorary degrees from Yale and Harvard Universities and had two stars at Hollywood Walk of Fame. The Walt Disney Company remains one of the most successful in the world till now. It is ranked by Forbes as one of the most profitable brands in the world.

The company continues creating the best animation films for kids. “The Little Mermaid”, “The Emperor’s New Groove”, “The Lion King”, “Frozen”, “Moana” and many other cartoons have become favorite for millions of kids all over the world. 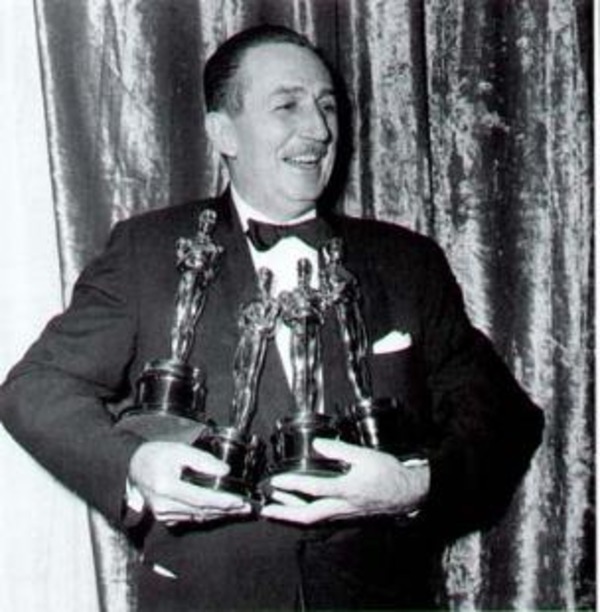 Walt Disney has made a successful career. In addition to numerous cartoons, he created one of the most popular tourists’ attractions in the world – Disneyland Park. Walt, who had no toys in his childhood, created the place, where both, adults and children, could forget about their worries and enjoy the great ambience of a fairy tale.

He created the magic world, which brought him international fame and cash. Walt Disney success story tells about a poor boy, who earned billions of dollars. But what are Walt Disney career secrets? 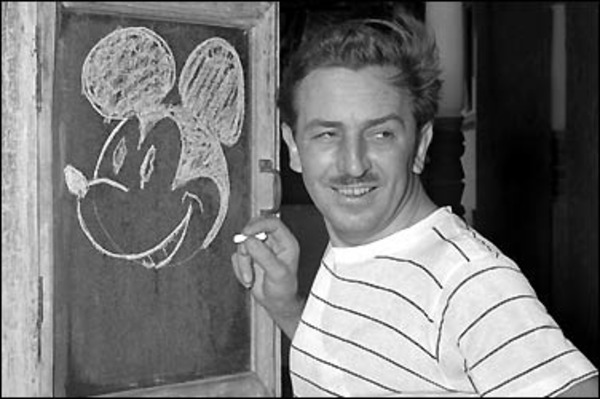 In fact, Walt Disney had never wanted to earn millions of dollars. He just wanted to draw – and occasionally he discovered that people are ready to pay for it. The stellar artist had no special secrets of success. Still, there were some principles, which helped him to climb on top. Here they are.

1) Invest in your knowledge

Although Walt Disney had no special education, he took drawing classes. When the boy turned 18, he could draw rather well. Nevertheless, he was lack of technique – and that inspired him to take drawing lessons.

That means, that if you have some passion, never hesitate to gain as much knowledge on the subject as possible – through taking classes, reading books on the topic and asking people, who are busy in this area. 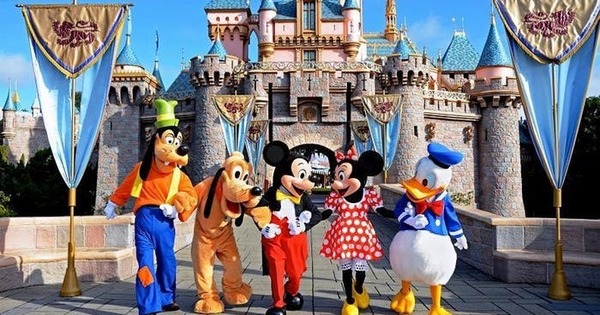 In one of his interviews Disney told, that he had always developed his company in different directions. Cartoons, theme parks, films and television projects – Walt Disney areas of activity were so different. And that made his brand recognizable.

3) Have a sense of humor

The person, who is targeted to earn a million, would never earn it. Life is beautiful, and even if you have a black stripe, you should treat it in a humorous way. Disney cartoons are underpinned by humor – and that’s one of the reasons of their popularity. 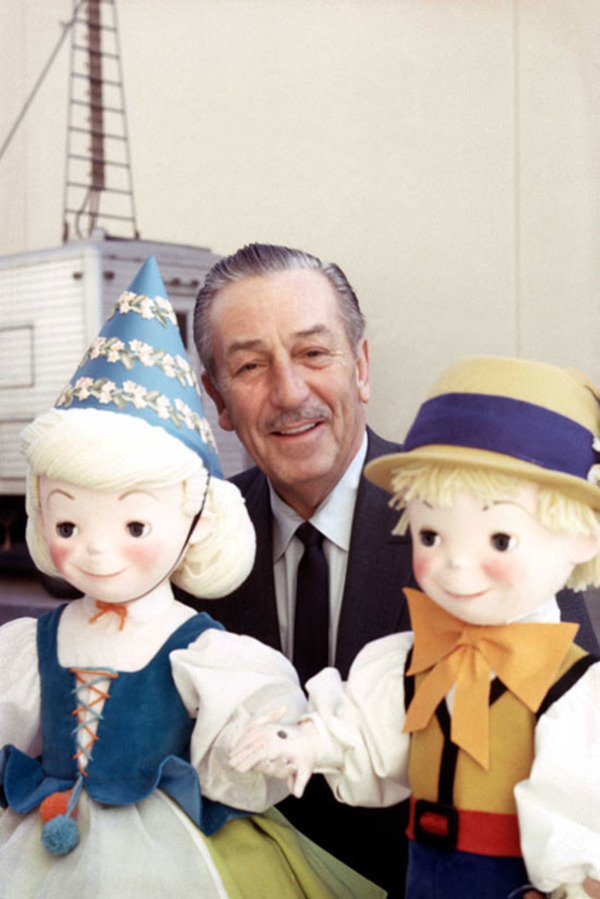 The talented, successful and humorous person Walt Disney passed away at the age of 65. The reason of his death was lung cancer. Unfortunately, PiNetworth couldn’t take an interview from this amazing artist. But we have some extracts from his interviews, which he gave to various issues during the years of his career. 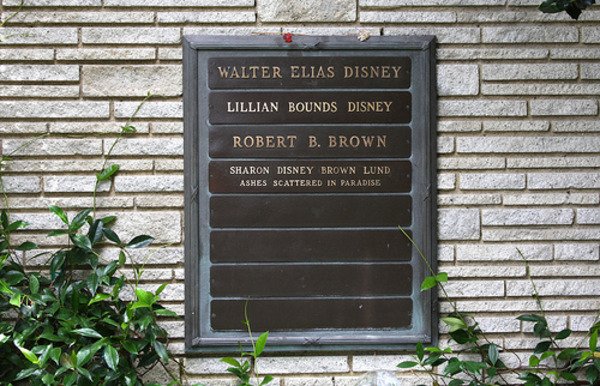 PiNetworth (PI): Hi! Your achievements look extraordinary for most of people. What is your secret?

Walt Disney (WD): I can dream! I am sure, if you can dream about it – then you can achieve it!

PI: You’ve created lots of cartoons for children and a theme park for them. But your own childhood was full of disasters and obstacles. If you could come into your early years, what would you change? 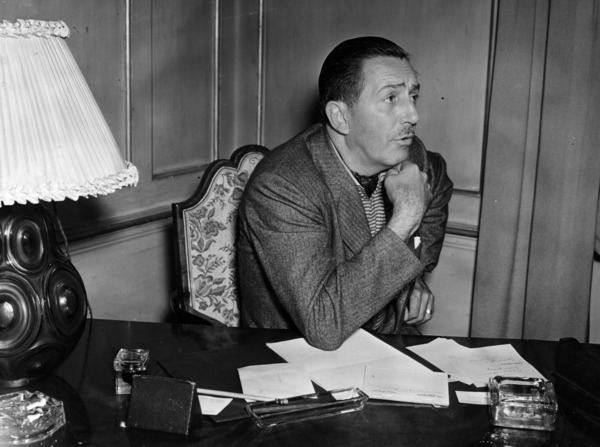 WD: I really had to deal with numerous problems in my early years. But now I value my obstacles and appreciate them. They strengthened me and helped becoming who I am now. You know, the kick on teeth can serve as a great motivation! That’s why I wouldn’t change anything! 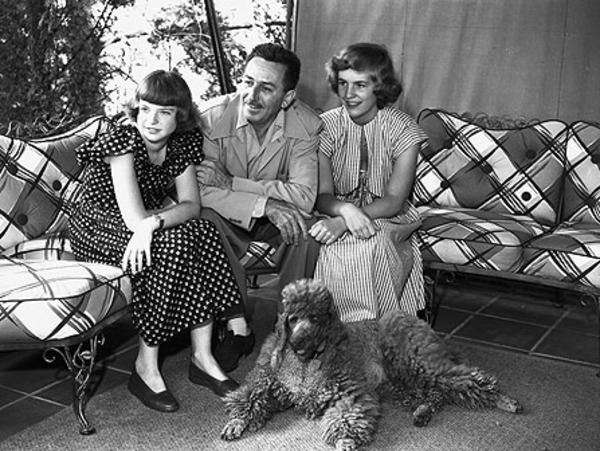 PI: How did you get an idea to open Disneyland?

WD: Each Saturday I went out with my daughters, Diane and Sharon. Each week we had “daddy’s day”. I took them to different places – to merry-go-round and other attractions. And each time they were playing and I sat on a bench, eating peanuts. I thought that it would be great to create a place, where both, kids and parents could entertain. Thus, many years later I created Disneyland.

PI: How do you think, what is the main reason, why people fail to achieve their goals?

WD: I think, it’s lack of confidence. Each time, when we had an idea or some new project, we studied it from top to bottom before we had made up the mind to work on it. But after that we started to realize the idea – and worked as hard as possible. And each of us was confident, that we would do this job better than others. Confidence is the key to victory and lack of it leads to failure. 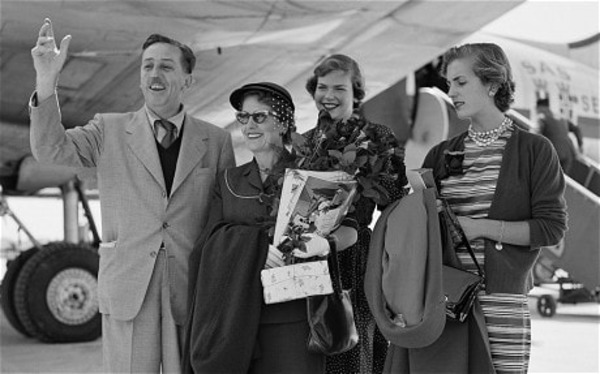 As you see, Walt Disney, a person, who came on top from poverty, can serve as the great role model for everyone. Get inspiration from his story and start working immediately!